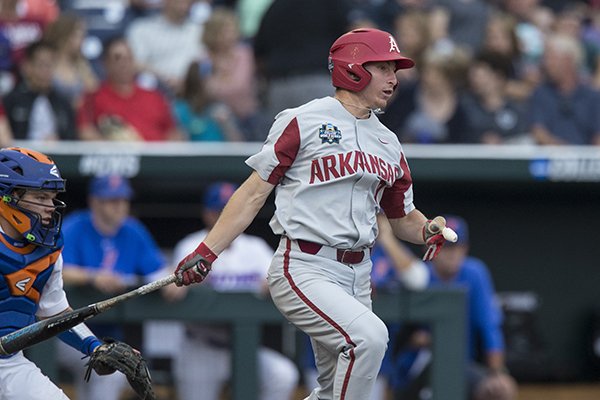 NORTH LITTLE ROCK — Jax Biggers hasn’t been able to watch many of his college alma mater’s games these past few weeks.

As the University of Arkansas baseball team continues its run in the College World Series, Biggers has resorted to checking box scores as he has had his own games most nights.

Biggers’ Frisco RoughRiders defeated the Arkansas Travelers 3-2 on Wednesday night at Dickey-Stephens Park in North Little Rock. This time, as the Razorbacks defeated Ole Miss to advance to a winner-take-all game today, he had a little help keeping up.

Throughout Tuesday night’s game and again Wednesday, the Traveler fans double as Razorbacks fans, giving him updates throughout, yelling updates from the stands as Biggers played defense.

When Zack Morris sealed the Razorbacks’ win in Omaha, Neb., the word slowly made its way from the upper levels at Dickey-Stephens down to the field.

The RoughRiders took a 3-2 lead in the top of the ninth inning, but the Travelers (34-31) attempted a late comeback, getting two baserunners on in the bottom of the ninth. That was until RoughRiders (34-31) center fielder J.P. Martinez’s throw beat Jake Scheiner to home plate to end the game and cut down the potential tying run.

Biggers went 0-for-3 at the plate, but it’s safe to say the Razorbacks’ win cushioned that.

Wednesday marked Biggers’ 17th game this season. After pulling three muscles in his hip the first week of spring training, Biggers was reinstated from the injured list on June 1. He entered Wednesday hitting .339, a career-high since being drafted by the Texas Rangers in 2018.

Biggers is still inching closer to full health, but he said he’s thankful not to be in Arizona rehabbing anymore, even if he isn’t 100%.

“When the only object is to get better every day you’re constantly thinking, ‘does it feel better?’ ” Biggers said. “So to be able to worry about my swing or the shift, some kind of aspect of the game keeps my mind off my hip. … Being hurt always brings a new type of joy to be able to play. Whether I’m hitting [.000] or [1.000], I’m truly excited just to be out and playing the game.”

Biggers, a shortstop for the 2017 and 2018 Arkansas teams, is familiar with impressive play from Razorbacks’ middle infielders. But 2022’s duo of Jalen Battles and Gold Glove-winner Robert Moore has exceeded even his expectations.

“I enjoy watching [Robert Moore] swing the bat a lot,” Biggers said. “I wish I could say he reminds me of myself, but he’s in a whole [different] tier than I was. Battles is a great player, too. He’s putting up numbers that are unspeakable.”

The RoughRiders didn’t require any unspeakable performances to win Wednesday, totaling 3 hits to the Travelers 12.

Arkansas tied the game the following inning with a two-run double from Jake Anchia. But Frisco got to Travis Kuhn (1-2) in the ninth inning as Justin Foscue brought in the deciding run on a sacrifice fly.