Hogs, Rebels will show their cards in final meeting 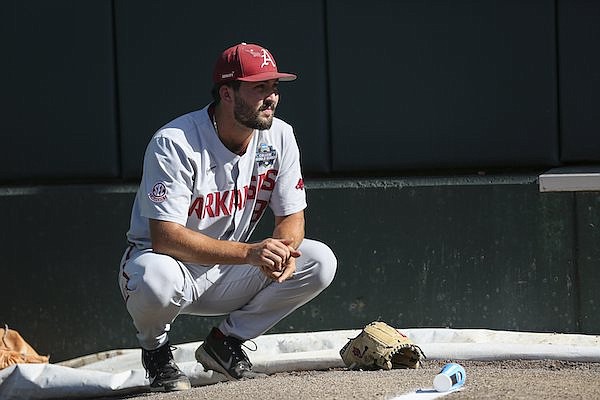 Arkansas pitcher Connor Noland watches during warmups prior to a College World Series game against Ole Miss on Wednesday, June 22, 2022, in Omaha, Neb.

OMAHA, Neb. — Arkansas and Ole Miss can’t afford to hold their aces for the national championship series against Oklahoma.

The teams will throw their No. 1 starters, right handers Connor Noland of Arkansas and Dylan DeLucia of Ole Miss, on short rest Thursday when they play at 3 p.m. at Schwab Field in the decisive national semifinal game at the College World Series.

Both pitchers threw 7 2/3 innings last Saturday in their opening games in Omaha. Noland allowed 2 runs on 6 hits and 1 walk in an efficient 79-pitch start against Stanford. DeLucia allowed 1 run on 4 hits, struck out 10 and took a perfect game into the fifth inning of a 114-pitch outing against Auburn.

“It would have been nice to start Dylan on Saturday, but you’ve got to get to Saturday,” Ole Miss coach Mike Bianco said following the Razorbacks’ 3-2 victory Wednesday.

On Tuesday, Arkansas coach Dave Van Horn floated the idea of starting Noland in Wednesday’s game. He said afterward the decision was made to give him one more day of rest.

“He's been preparing for it and working out, just like their guy,” Van Horn said. “(DeLucia) was long tossing today. We saw him, we watched. We knew that he was getting ready for tomorrow if needed.”

Arkansas forced Thursday’s game with the victory Wednesday night. Had Ole Miss won the game, the Rebels would have advanced to the championship round.

Noland and DeLucia faced off against each other during an April 29 game in Fayetteville that Ole Miss won 4-2. DeLucia was the winning pitcher with a 7-inning start that included 2 runs, 8 hits, 2 walks and 9 strikeouts in 105 pitches.

Noland (8-5, 3.75 ERA) had his longest outing of the season against Ole Miss, but it was also one of his least effective starts. The Rebels had 11 hits and 4 walks against Noland and scored all of their runs during his 8 innings.

That was the start to a rough five-game stretch for Noland, but he has rebounded with three strong starts during the NCAA Tournament. Against Grand Canyon, North Carolina and Stanford, Noland has combined to allow 3 runs on 18 hits and 5 walks in 21 1/3 innings.

DeLucia (7-2, 4.07 ERA) has also pitched well in the postseason. In 19 1/3 innings against Arizona, Southern Miss and Auburn, the transfer from Northwest Florida State College has allowed 5 runs, 13 hits, 3 walks and struck out 31 batters.

DeLucia, who began the season as a reliever, has had one five-day turnaround between starts. In that instance he allowed 2 runs, 6 hits and walked 3 during a 4 1/3-inning, 92-pitch start against Vanderbilt at the SEC Tournament on May 24.

Noland’s shortest turnaround between starts was six days, most recently April 7 at Florida. He allowed 1 hit, struck out 7 and threw 97 pitches in 7 scoreless innings.

Noland also pitched in relief on short rest during the ninth inning of a regional game against Oklahoma State on June 5 and allowed 3 runs on 2 hits and 2 walks in a blown save situation. That was his only relief appearance this year.

“The game usually tells you what to do,” Van Horn said of Noland’s readiness to pitch Thursday. “We'll see what we see from him and see what kind of stuff he has, see what type of swings they're taking and we'll go to the next guy.”

“It shapes up for a really good game,” Bianco said.