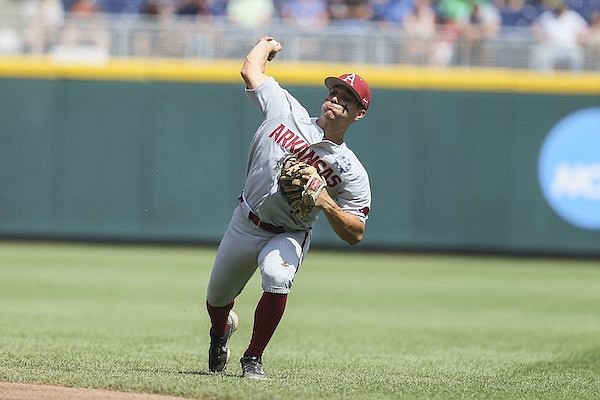 OMAHA, Neb. — The Arkansas Razorbacks did not make the championship series but they played championship level defense throughout their five-game appearance at the College World Series, including in Thursday’s 2-0 loss to Ole Miss in the Bracket 2 final.

The Razorbacks turned two double plays, both more difficult than average and slightly unusual, to bring their season total to 60, second in the nation behind Baylor’s 64.

Their first double play ended the third inning. First baseman Peyton Stovall started it with a pick on TJ McCant’s grounder to his right. Stovall fired to shortstop Jalen Battles, who tapped the second base bag and gave the relay back to Stovall to beat McCants by a step.

“Pitchers were just throwing strike after strike and defense, and we did what we did all year long. We played defense and turned a couple double plays,” Arkansas Coach Dave Van Horn said.

ESPN analyst Chris Burke, a former infielder at Tennessee, was impressed by the first twin killing.

“This Arkansas team can pick it with the best of them, especially when it starts with a first baseman [Stovall]who was a middle infielder,” Burke said.

Arkansas got out of the sixth on a rare 5-6-3 double play. Cayden Wallace fielded a hot shot from Jacob Gonzalez, dropped it, quickly recovered and fired to Battles, who was playing behind the base in a shift, and completed the twin killing with a strong relay to nip Gonzalez.

Thursday’s game was the second time in three postseasons that Arkansas and Ole Miss played three games against each other. They also played in the 2019 Fayetteville Super Regional that the Razorbacks won with a 14-1 victory in Game 3.

The Razorbacks hit a familiar tune in their farewell at the College World Series on Thursday.

Arkansas’ hitting dried up in its 2-0 loss to Ole Miss in the elimination game, much as it did in last season’s home super regional loss to North Carolina State and in final losses at the CWS in 2018 and 2019.

The Razorbacks managed four singles against Ole Miss ace Dylan DeLucia, who retired 18 of 19 Arkansas batters during one stretch.

“Dylan just did a great job over there,” Arkansas Coach Dave Van Horn said. “He didn’t walk anybody. He didn’t give us a chance. We didn’t have a leadoff man on one time in nine innings.”

Arkansas went 4 for 32 (.125) against DeLucia, the same batting average they posted in losses to the Wolfpack in games 2 and 3 last June at Baum-Walker Stadium in Fayetteville.

Arkansas did not win the title in its 11th appearance at the College World Series in program history, pulling the Razorbacks into a tie for third with North Carolina among teams with the most appearances without a national championship.

The leader in that department is Florida State, which has gone to Omaha 23 times without winning the championship. Clemson is second with 12 title-less appearances.

Coach Dave Van Horn also moved into a tie for third among coaches with nine appearances in Omaha (seven at Arkansas, two at Nebraska) and no championships.

Florida State’s Mike Martin reach the CWS 17 times without a title, and Oklahoma State’s Gary Ward did it 10 times. Van Horn is in a tie with former Northern Colorado Coach Pete Butler.

Arkansas Coach Dave Van Horn did not mention him by name, but he indicated sophomore third baseman Cayden Wallace will not return next season.

“It was a veteran group, obviously, with a couple of younger guys mixed in and a draft-eligible sophomore that won’t be back,” Van Horn said.

Wallace is eligible to be drafted as a sophomore because his 21st birthday on Aug. 7 falls within 45 days of the Major League Baseball Draft. The draft is scheduled to begin July 17.

Arkansas fell to 5-8 all-time against SEC teams at the College World Series, including 2-4 in games played as part of national semifinal matchups.

Arkansas was 2-2 against SEC teams this year in Omaha with one victory apiece over Auburn and Ole Miss, and two losses to the Rebels.

Ole Miss is the eighth SEC program to make the national championship series since 2008.

Georgia (2008) and Arkansas (2018) have played in the championship series once apiece in the past 14 years.

Oklahoma is the first Big 12 team to play for a national championship since Texas lost to LSU in 2009. The Sooners will join the SEC by the 2026 baseball season.

Coach Dave Van Horn’s respect for Ole Miss veterans Tim Elko and Kevin Graham played out in his postgame commentary when asked about the Rebels’ strengths.

“Experience,” Van Horn said. “Thank God I don’t ever have to see Kevin Graham hit against us again. It seems like that guy is always up.

“I have nightmares about him, I’ll be honest with you. Elko, what a great kid. Man, full-grown man. Seeing him in the batter’s box makes you nervous.”

Moore, playing in short right-center field, dove to his left to field a hot shot off the bat of Kemp Alderman. Moore made the stop, rolled over, spun around in lightning fashion and threw Alderman out at first base with plenty of room to spare.

Kemp tipped his batting helmet to Moore after jogging past first base.

Arkansas was the designated home team Thursday but elected to wear its gray road uniforms.

The Razorbacks had been 6-0 in those jerseys during the NCAA Tournament, including 3-0 in games at the College World Series.

William Morris, the father of Arkansas pitcher Zack Morris, has been an employee at the Arkansas Democrat-Gazette for 30-plus years. He shared thoughts on his son’s performance from Wednesday, a critical save with the bases loaded and no outs in a 3-2 Arkansas win, in a company email thread Thursday morning.

“Thank you everyone for the kind words,” the elder Morris wrote. “After last night’s game I talked to Zack and he definitely wasn’t nervous at all. I made up for that though. I was more nervous and anxious than I have ever been in my life. Normally I’m not nervous at all, but last night got me!”

• The designated home teams fell to 2-11 in the series after Arkansas’ loss to the Rebels in the third-base home dugout. Oklahoma will be the first home team in the national championship series Saturday.

• Teams that scored first have won 11 of the first 13 games in Omaha. The only outliers on that stat came when Texas A&M overcame a 2-0 deficit to trounce Texas 10-2 in an elimination game on June 19, and when Auburn rallied from a 2-0 deficit to eliminate Stanford 6-2 the following day.