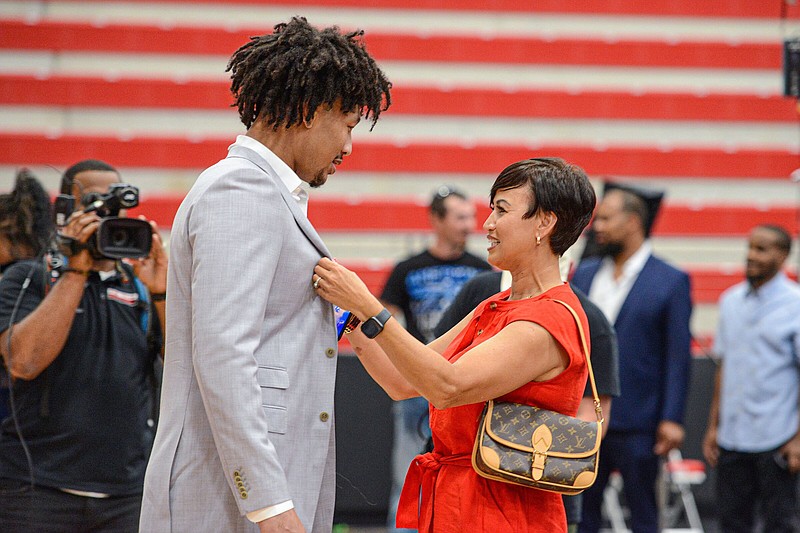 Former University of Arkansas forward Jaylin Williams speaks with his mother, Linda Williams, on Thursday before an NBA Draft watch party inside Northside Arena in Fort Smith. Williams was chosen by the Oklahoma City Thunder in the second round. (NWA Democrat-Gazette/Hank Layton)

Williams, a 6-10 forward from Fort Smith Northside who played at the University of Arkansas the previous two seasons, went to the Oklahoma City Thunder in the second round of Thursday night’s NBA Draft as the No. 34 pick overall.

“It’s great,” Williams said of being picked by the Thunder. “It means I can still see my family a good amount of time.”

Williams was surrounded by about 200 family members and friends at a draft watch party held at the Northside Arena.

“Probably more than half the people here are family to me,” Williams said, as he fought back tears recalling that his grandmother, Cora Williams, died in November. “This past year hasn’t been the easiest year for us, and sharing this with everybody I love, I didn’t want anything else.”

Williams, the 41st Razorback to be drafted and 22nd to go in the first two rounds, began crying and held his face in his hands when it was announced on ESPN’s telecast he had been drafted by the Thunder.

The telecast was shown on the arena’s video scoreboard.

“It was crazy,” said Williams, who wore a light gray suit without a tie. “I grew up watching the draft, watching those moments.

“For me to have that moment and see my name with my picture and my highlights is unreal.”

“He crashes the boards. He’s what you call a great glue guy.”

In SEC play, Williams averaged 13.6 points and 10.2 rebounds. He set career-highs with 22 points at Alabama and 16 rebounds against Tennessee.

“When Jaylin went to Arkansas, he got a lot stronger,” Northside Coach Eric Burnett said. “And once he got stronger, he felt like he was the man. You see that confidence out there on the floor.”

Williams was an All-SEC pick in voting by the conference coaches and media. He also was voted by coaches to the SEC’s all-defensive team.

“He had an amazing career at Arkansas,” Burnett said. “I credit Jaylin’s dad [Michael Williams]. He really taught Jaylin at a young age about how to think the game, and play the game. That’s why his basketball IQ is so high.”

“I know what Jaylin’s going through having been a guy who went through this process and being from Arkansas and playing for the University of Arkansas,” said Brewer, an All-SEC guard for the Razorbacks who was a first-round pick by the Utah Jazz in 2006. “For him to be able to share this moment with his friends and family is something he’s going to remember for the rest of his life.

“When you hear your name called in the NBA Draft, you join an elite fraternity. It’s a true blessing. I’m happy to be here to support him on his big night.”

Smart, a standout at Indiana University, was drafted in the second-round pick by Golden State in 1988 at No. 41 overall.

“Jaylin’s a heady player and he understands how to play the game,” said Smart, an NBA head coach with Golden State, Cleveland and Sacramento. “He understands defensive concepts. All those things got him into this position to be in the NBA and moving forward with his career.”

Williams said Oklahoma City was the first team he worked out for entering his name into the draft on April 4. He worked out for the Thunder before going to the NBA Scouting Combine, which was held in Chicago on May 16-22.

“I didn’t even think I had my best workout there,” Williams said. “But I feel like I had a good one.”

Burnett said the Thunder are getting a high character player.

“When you ask him to do something, you can take it to the bank that Jaylin’s going to do it,” Burnett said. “He’s going to always think about the team.

“Jaylin is a special young man, and I was very fortunate to be able to have the opportunity to recruit him,” Corey Williams said. “I know this is a special occasion for him, and I wanted to be involved. I want to make sure I showed my support for him and his family and showed my love for him as a person.

“A lot of the NBA teams that I’ve been able to talk with, what I said to them was, ‘He’s a winner. He doesn’t care about his stats, he wants to win.’ He’s proven that.”

Brewer said Oklahoma City is getting “the ultimate pro” in Williams.

“He’s a very hard worker, a very vocal player and one of the best defenders available,” Brewer said. “He’s like a Swiss Army knife — somebody that can do it all. He can pass, shoot, rebound, play defense, take charges. He can do a lot of different things.

Burnett said Williams contacted him to ask if his watch party could be at Northside Arena.

“When he texted me about three weeks ago, I couldn’t dial his number back fast enough,” Burnett said. “And said, ‘Yes, that’ll be great, I’ll do anything you need me to do.’ ”