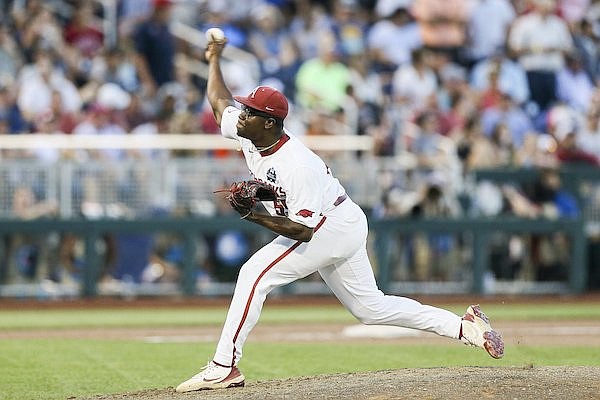 FAYETTEVILLE — Three additional baseball players who traveled with Arkansas during the NCAA postseason entered the transfer portal this week.

"Huge thank you to everyone in Arkansas for the past two years," Tole wrote on Twitter. "I will be transferring to the University of Texas for the rest of my college career."

All three players were on the travel roster for the Razorbacks during the regional, super regional and College World Series.

Only Starks saw playing time during the postseason. The right hander from Pine Bluff retired the only batter he faced during a June 5 game at Oklahoma State, and allowed 3 runs, 2 hits and 1 walk while recording 2 outs during a loss to Ole Miss at the College World Series on June 20.

Tole recorded a 1 1/3-inning save during the Razorbacks’ first victory of the year over Illinois State and also factored into decisions in wins over Arkansas State on April 20 and Central Arkansas on April 26. His final outing came during a May 3 game against Missouri State.

Starks was also a true freshman on the 2021 team.

Soliz, who was listed as a catcher/outfielder on the roster but started his only game as a designated hitter, appeared in five games as a freshman this season. In 10 plate appearances he was 2 for 9 with 2 runs, 1 RBI and 1 walk.

With the transfers of Leach and Soliz, Arkansas has no catchers returning for the 2023 season. The team’s primary starter this year, Michael Turner, is out of eligibility.