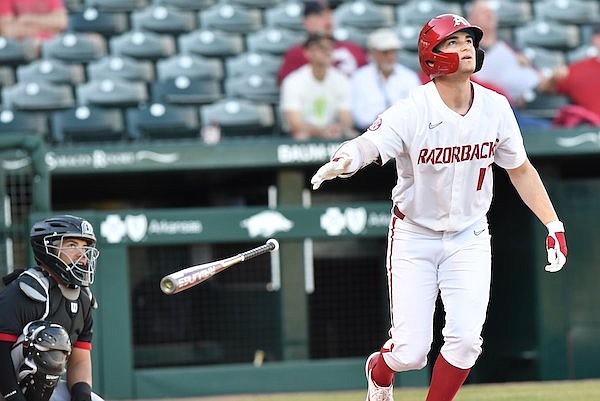 Arkansas right fielder Brady Slavens (17) watches a home run during the fourth inning of a game against Nebraska-Omaha on Wednesday, March 2, 2022, in Fayetteville.

FAYETTEVILLE — Time will tell whether Brady Slavens’ mammoth home run in the fourth inning against Nebraska-Omaha will be a turning point for Arkansas’ offense in 2022.

There was little doubt it was the turning point Wednesday afternoon.

Slavens’ 390-foot blast onto the top of the Hunt Center beyond the right-field wall tied the game 2-2, and Arkansas’ next four hitters also scored in the inning to propel the sixth-ranked Razorbacks to a 15-3 victory over the Mavericks at Baum-Walker Stadium.

Arkansas (5-2) scored five runs in the fourth and seven runs in the fifth to take command of a game they trailed 2-1 after 3 1/2 innings. The Razorbacks had not scored more than four runs in an inning or more than six runs in a game prior to Wednesday.

“We had a couple of back-to-back innings where we scored five, six runs, and we feel like we have that type of team,” Arkansas coach Dave Van Horn said.

It was a needed slugfest for a lineup that struggled at the plate the first two weeks, including last weekend when Arkansas struck out 28 times and recorded nine hits during games the same day against Stanford and Louisiana-Lafayette at the Round Rock Classic.

The Razorbacks entered Wednesday’s game last in the SEC in most offensive categories, including batting average (.213), on-base percentage (.326), slugging percentage (.360), runs (22), RBI (20) and hits (42). In most cases, Arkansas was well behind the team that ranked 13th in the league.

The metrics all improved with the 15-hit performance against the Mavericks (2-7). The Razorbacks also walked nine times and reached once on a hit batter.

“I think (Slavens’ home run) did loosen us up because we’ve been struggling,” Van Horn said. “We’ve been fighting ourselves a little bit. We feel like we can hit. We have faced some really good pitching this year.”

Before the game, Arkansas’ hitters met and the message was to relax, said Michael Turner, the Razorbacks’ catcher who was 3 for 3 with 3 RBI and hit a 2-run home run off the Hunt Center in the fifth inning.

“We saw in the fall that this offense is going to be special this year,” Turner said. “It didn’t start out like we expected, but…I think a game like today is definitely going to loosen everybody up a little bit. You could see after a big hit like (Slavens’), it’s contagious. I really believe that. I think hitting like that is contagious and as soon as he did, you could tell it was a big relief in the dugout. It helped us out a lot, for sure.”

Van Horn said some hitters had been trying too hard. It showed in critical times. Arkansas loaded the bases three times during the two games last Sunday, but never recorded a hit.

Chris Lanzilli had the Razorbacks’ first hit of the season with the bases loaded during the fourth inning with a two-out, two-run double to left field. Arkansas also had its first sacrifice fly of the season in the fifth inning when Turner lined out to center to score Lanzilli.

“When Lanzilli doubled into the corner and put us up (6-2), that was like maybe the first big game separator we’ve had this year,” Van Horn said. “So that was really good to see.”

Van Horn was also pleased to see a breezy southwest wind that blew out to left field. Arkansas' power numbers were hindered in the first two weeks due to stiff winds that blew in from the outfield.

The Razorbacks played all of their games in Round Rock, Texas, in a frigid north wind that blew into the hitters' faces. It was 74 and sunny when Arkansas' Mark Adamiak threw the first pitch Wednesday.

"I told our players we deserve that weather from what we’ve been through," Van Horn said.

The offensive outburst came against a Nebraska-Omaha team that held UCLA to four runs in a midweek game last week. Van Horn said the Mavericks’ pitching was good early in the game, but wore down thanks to some good at-bats, such as a 10-pitch battle by Peyton Stovall to lead off the bottom of the first inning.

Van Horn liked what he saw from the team in the pregame and felt a good performance was on-deck in the first of a 13-game homestand.

“To be back home for 12 more games in a row, hopefully we’ll continue to play well,” Van Horn said, “and continue to gain a lot of confidence at the plate.”

wholehogsports · ⚾️ Baseball: What we learned in Round Rock, previewing Southeastern Louisiana