Notae was tougher for Arkansas 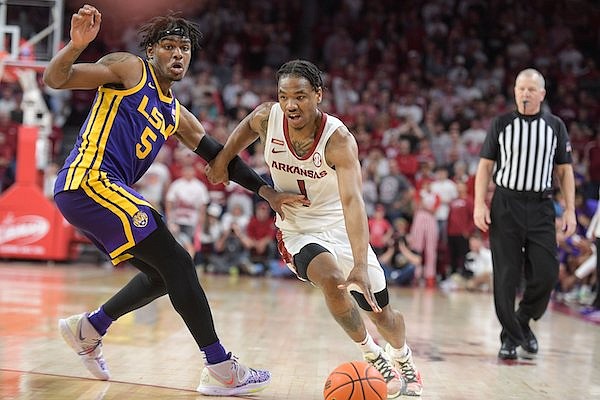 FAYETTEVILLE — Not many teams have matched the awesome toughness that has been the calling card for No. 14 Arkansas over the last two months. LSU came close Wednesday night at Bud Walton Arena.

The ultra-talented Tigers went on the floor for loose balls as many times as the Razorbacks. They dominated the rebounding.

But despite knocking the streaking Razorbacks every which way but loose, they just were not tough enough or smart enough in the clutch. They did not make the winning plays.

The Hogs did in typical fashion for this Eric Musselman-coached team.

JD Notae got the game’s most important rebound, then displayed toughness by canning two free throws with 8.6 seconds left for a 77-76 victory before 19,200 wild fans. It closed the books on a 17-1 home season that proved no one has a better advantage on their own court.

LSU fired wildly on its last two possessions — once with an offensive rebound and the lead — and fouled Notae in a trap that led to the winning points.

LSU brought the fight. The pileups on the deck for loose balls were incredible from start to finish. The Tigers dove with the same reckless abandon, but ultimately fouled too much and that was the advantage the Hogs used for victory.

More from WholeHogSports: Full coverage from Arkansas' win over LSU

The Hogs could have had a bigger advantage in free throws if they had attacked more in the first half, something Musselman bemoaned both at halftime in the locker room and in the media room afterward.

Musselman pointed to LSU’s tendency to flash for steals, hack drivers in the lane and challenge every shot. He said the Hogs went 2 of 14 on threes in the first half. They attempted only seven three-pointers in the second half.

“Any time you see a high steal team, they are probably a high foul team,” Musselman said. “In the first half, we were horrific, settling for threes. They lunge, they slap — and I give them credit — but you have to attack.”

“They are really talented,” Musselman said, with a special nod toward LSU forward Tari Eason.

“He’s really aggressive,” Musselman said. “That’s offensively and defensively. We had it in our script to get him in foul trouble, but we got away from that.”

The aggressiveness was incredible. There was one sequence when the basketball bounced away from players as they jumped on each other and pileups occurred in three places.

Arkansas center Jaylin Williams, who added 19 points and 10 rebounds, said it was so crazy that everyone was laughing on the court.

“We were all dying with (laughter),” Williams said. “Both me and JD hit our knees (on the floor).”

Williams said the loose-ball sequences give this team joy.

“We have been doing that all year,” he said. “We look at each other and laugh at those sequences.”

Musselman said it’s a matter of battling for extra possessions.

It’s important when the Tigers are getting extra possessions on offensive rebounds.

“It was really physical,” Musselman said. “Whoever watched this game on (ESPN2) or was here probably thought both teams played with incredible effort.”

The defense was dynamic. The two players wearing No. 1 were suffocated for most of the game.

LSU took the ball out of Notae’s hands with double teams and traps. He scored 12 points on 3-of-12 shooting.

LSU’s Xavier Pinson scored 12 points on 5-of-21 shooting. He missed all seven of his three-point attempts.

The Hogs rotated Au’Diese Toney, Davonte Davis and Notae on Pinson. However, Pinson had an open look at the end, weaving past both Notae and Davis.

Pinson’s running layup near the left block missed with 3.1 seconds left. There was nothing close to a foul. Kamani Johnson was charging on the back line that forced Pinson into a Euro step.

Muselman said the defense on Pinson was solid most of the night. The Hogs forced him to his off hand in most drives and didn’t foul.

The Hogs play defense without fouling. It’s what separates them from most teams. They held LSU to 31.7% shooting in the second half. It would have been much less except for second-chance points.

“We never thought we were going to lose,” Williams said. “We were down to them at (Baton Rouge) and we won. It’s getting to be we are used to it. We know we are going to fight back and our chemistry keeps us going.”

Umude said, “We got outrebounded like crazy but we still came up with a win.”

It looked like a long shot at several points, most notably when Notae slipped on the court with the ball on a change of direction with 40 seconds left. The Tigers came up empty on two looks before Notae gathered the defensive rebound.

Notae tried to go coast to coast with the dribble. Three Tigers turned him away and had him trapped on the sideline 25 feet from the basket. But Mwani Wilkinson slapped down at the ball for a silly foul.

That goes back to the scouting report from Musselman: the Tigers will slap.

“Even when JD is not scoring,” Musselman said, “He keeps coming up in the clutch.”

It’s called toughness. The Hogs have it, especially JD Notae.