Stromberg: Razorbacks will speak with their pads 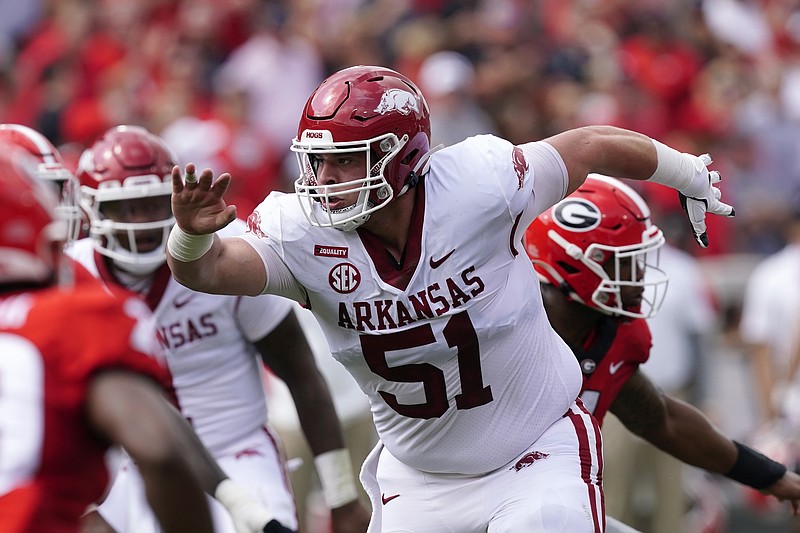 Stromberg is the anchor of what should be an outstanding offensive line. He’s excited about starting spring practice on March 13. He sees room for improvement in his own game and the taking another step forward in the third year of the Sam Pittman era.

“We have some guys who are bigger, but we are watching how that effects us. I know that’s what I’m doing and watching my nutrition.”

Bigger isn’t always better in the Kendal Briles offense. The playcaller and quarterback coach for the Razorbacks operates an up-tempo scheme that can be taxing for a big man.

“You see those defensive linemen with their hands on their knees on a 15-play drive when we are about the 20-yard line,” Stromberg said. “Well, it’s tough on us, too. So you better be in shape and not carry too much weight.

“It’s great when you catch the defense on their heels with this offense. The defense is turned looking at the offense to get their calls and we are snapping the ball, but it’s tough on us, too. That offense can leave us gassed in the O-line, too.”

It’s pretty common to see opposing coaches call for a defensive player to fall to the ground for an injury timeout.

“That can be hilarious, but I’m not going to lie, it gives us a break as an offensive line, too,” Stromberg said. “That Ole Miss game was interesting. I was standing next to one of their guys and he was laughing as he went down. I said, ‘Are you serious?’

“The thing you know when that starts happening: we got them.”

There was confirmation that offensive linemen love playing for Pittman, the UA head coach who was considered one of the nation’s elite offensive line coaches before taking the Hogs to seven SEC wins over the last two seasons.

The Hogs surprised with a brilliant 9-4 record last season, including victories over Texas, Texas A&M, LSU, Mississippi State, Missouri and Penn State, the latter in the Outback Bowl.

“As far as our (O-line) group, you couldn’t play for a better head coach,” said Stromberg, back for his senior year as a three-year starter.

“You knew what this team was going to be like when he became head coach, just the same DNA as Coach Pittman. We were eventually going to become a grind and pound type team and you saw that last year.”

That’s the way an offensive linemen likes it.

The Hogs have plenty of defensive parts to replace, but Stromberg doesn’t seem to worry that things will slip from last year’s 9-4 record.

“I think you will see the same results, or better,” Stromberg said.

But don’t expect any bragging or predictions. That’s as close to one as these Razorbacks are going to give.

“We were about work, not talk,” he said. “That’s what I love about these guys. They aren’t on social media. Don’t be talking. Let your pads do the talking.

“If you work hard, you know the results will come. You don’t have to talk.

“We are going to continue to play with a chip on our shoulders. Everyone just goes to work.”

The idea is to outwork the opposition for 12 months.

“We’ve got our mid-term guys with us now and we are teaching them about how hard we work,” Stromberg said. “It’s a lot. I didn’t come in early so I don’t know how they are doing it, to be honest.

“I came in over the summer and it isn’t the same as the work load right now. You usually are taking four classes, then you have football (offseason) and then you have two hours of study hall.

“I think back on that first semester of college, there was no time for video games. I actually can play video games now, but these guys probably don’t have time for that now. We are trying to bring them along.”

The workload in the fall is impressive.

“It really is,” Stromberg said. “We grind as a team. Monday practices are pretty hectic. Then we really hit Tuesday and Wednesday. There is some on Monday, too. We feel like we work pretty hard.

“The practice schedule is a grind, but then you get to the weekend and it’s fun. We sure had fun last fall. The stadiums were full. It was amazing.”

When did he see the team come together?

“I think we felt like we were going to have a good team,” he said. “We were disappointed that we didn’t play better against Rice. Of course, the Texas game was pretty good.

“But when we knew what we had was when we beat Texas A&M. That game was the turning point. I thought, ‘Hey, we are pretty good.’ I think the whole team felt that way and our confidence began to build.

“We didn’t like the way we played at Georgia. It seemed like that first quarter we couldn’t get out of the hole. We had trouble with the off sides and getting the snap. I couldn’t hear (quarterback) KJ (Jefferson). You’d think as close as he was, I’d hear him clap. But I had to look between my legs to see him clap.”

That was one of the few down times for the Hogs. They were in just about every other game.

“I have a lot of great memories,” Stromberg said. “I remember when we took a knee to end the bowl win, I looked around the stadium and saw everyone excited and I thought, ‘We just had a pretty good year.’ We did.

“All of it was fun. It’s tough not to like what we did to Texas (with 333 rushing yards). The fans coming onto the field was great. Everyone was hugging each other. There was one student who ran up to me and wanted to shoulder bump, so I did. I knocked him sideways on the ground. You forget that I had 100 pounds on him.”

There is no tighter bond than what has been created within the offensive line group. Cody Kennedy, who took over as that group’s coach in the early summer, has tightened that bond.

“I’ll just say that Coach Kennedy is a good fit for us,” Stromberg said. “We go over what we are going to do against certain calls and blocks during the week, but then in game time he lets us make the calls. It’s on us.

“We keep getting better. I think our bond is close, but it’s getting closer. We have added young players to it and they fit, too.

“We return as the No. 1 rushing team in Power 5 and we think we are going to get better. We have experience at every position.”

That was an interesting statement. The Hogs lost left tackle Myron Cunningham to graduation.

“We did, but Luke Jones has moved there and it’s going well,” Stromberg said. “It seems like that’s going to work out. I feel like we’ve gotten better every year.”

Asked if it’s like a crescendo effect, Stromberg said, “Yes, I think you could say that. I see that happening again.”

Jones split time with Brady Latham at left guard last year. So there is experience at all five positions. Youngsters Jalen St. John and Ty’Kieast Crawford will be pushing for playing time in the spring, both at guard and tackle.

Stromberg knows Pittman and Kennedy like to move offensive linemen to different spots in the spring to make sure there is versatility in the fall in case of injuries. For example, Ty Clary played center, guard and tackle last year as a utility man in the offensive line.

“I’m going to play multiple spots this spring,” Stromberg said. “I still have things to improve in my craft, but I am going to get some time at guard, too.”

There are no plans to change positions.

“Playing some guard will be good for me,” he said. “I like guard, my spot from my freshman year. But I’m a center.”

Interestingly, Stromberg said his father once predicted he’d be a center.

“I was going both ways as a nose tackle and offensive tackle,” he said. “I think that was when I was younger and my dad said, ‘You would be a great center.’ I said, ‘No way.’ But he was right.

“I really thought I was going to be a nose tackle in college. UCLA wanted me as a nose tackle, but they said they were going to build me up to 350. I didn’t want that and I didn’t think I’d like Los Angeles. That’s a different place and a long way from home.”

There are specific things Stromberg wants to fix this spring.

“I have some things I do that I want to eliminate,” he said. “I have a tendency to hop just before I make a block. I don’t know why I do it, but it sets you up to get knocked off balance.

“I let my hands leak in pass protection. So I see things to improve.

“But mainly, we just want to continue to improve our bond. I think it’s pretty good. I talk to players on other teams and I think our O-line bond is better than what they have there. We do everything together. I think our work ethic is better.

“I think we are just going to keep getting better as a team. We are getting another spring in this system and it’s exciting. We are still learning and getting better. I think I can get better for sure. I want to keep my hands up higher after the snap.”

Stromberg said there is a good blend with the transfer players. Specifically, he mentioned Alabama linebacker Drew Sanders.

“All of them look to be good additions,” Stromberg said. “I’ve spent time with Drew Sanders. He seems like there is a lot of dog in him.”

“I talked to him a little bit because I have some friends on the Oklahoma team from my high school, some on the team and some not,” he said. “Jadon knows those guys.

“We talked a little about their weight program. They did things a little different, maybe run a little more than we do. I do know Jadon is going to be a fit because he goes to work. He stays late to work on his routes. We have workers here and he’s going to be one of them.”

That’s the most important part of the message from Stromberg.

“That’s just what this bunch is about,” Stromberg said. “Don’t talk. Work.

The pads do the talking at Arkansas these days.