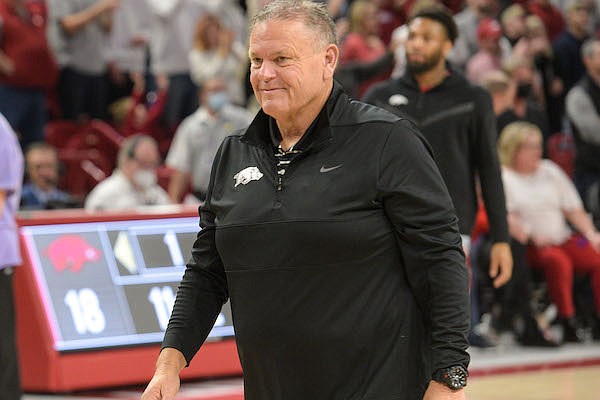 Arkansas' Prospect Day was a big success with several of the recruits leaving with smiles on their faces.

Sophomore defensive back Landyn Cleveland, 6-0, 185, of Mansfield (Texas) Legacy, was re-offered by Arkansas during his visit. He received an offer from former cornerbacks coach Sam Carter in December. He also has offers from Arizona State, TCU, Baylor and other programs.

Cleveland is from the same high school program as Arkansas safety Jalen Catalon. He said the people of Arkansas stood out.

“The people and the culture. The people were great and just everything was great,” Cleveland said. “The coaching staff was amazing. They treated me great and treated my family great and the meeting rooms and the facilities were great.”

Junior offensive lineman Joe Crocker, 6-6, 290, of Nashville (Tenn.) Franklin, left the visit with an offer from the Razorbacks. He has others from Georgia, Tennessee, Michigan and Louisville.

"It was great. I really enjoyed it,” Crocker said. “The highlights of the trip was being offered, and also talking about the offensive philosophy and how much time they spent with me. Arkansas for sure will be one of my top schools moving forward and I am just excited to keep building a better relationship with the staff."

"The visit was great,” said Simmons, who has been selected to the 2024 Under Armour All-American Game. “The coaches and how they show us that much love, showing us around the big facility, they are most definitely up there in the top five schools I'm thinking about going to.”

Simmons has 19 scholarship offers from schools such as Arkansas, Texas, Texas A&M, Oklahoma State, Nebraska, Louisville, Michigan State and others.

“I love the vibe out here and the food was great,” Simmons said.

“I really loved the vibe of the whole coaching staff,” Dotson said. “Arkansas is definitely in my top. Crook even hosted me and Colin. Also had a chance to speak with Coach (Barry) Odom and (Dominque) Bowman.

"They said I’m truly (an) SEC DB. I plan on coming back real soon.”

He has offers from Arkansas, Southern Cal, Oklahoma State, SMU, Kansas State and other schools.

Freshman linebacker Mantrez Walker 6-0 210 of Buford, Ga., received his first Division I offer from the Razorbacks during the visit.

The Razorbacks are in good standing with Walker.

"Right now, Arkansas is at the top,” said Walker, who added he plans to visit again. "Arkansas really showed a lot of love. Arkansas is a good place and I just really like it.”

Sophomore linebacker Makhi Frazier, 5-11, 205 of McKinney, Texas was able to see Arkansas for the first time.

"The visit was great," he said. "I was impressed by the facilities and stadium. The highlights of my trip were getting to know the culture of Arkansas which is a family like culture. I felt very comfortable getting to express myself and Arkansas stands real tall with me now."

He has offers from Arkansas, Utah State and Northern Arizona.