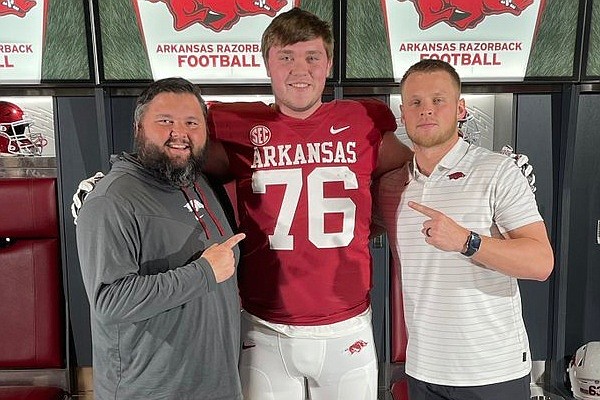 Brown was offered by Arkansas coach Sam Pittman and Razorbacks offensive line coach Cody Kennedy after the visit to move his total to 14.

“The visit was good,” Brown said. “I spent a lot of time with Coach Pittman, Coach Kennedy and (assistant offensive line) Coach (Ryan) Yurachek, and they took me through everything, offered me a scholarship and really opened my eyes about the opportunities at the university.”

The unofficial visit exceeded expectations for Brown, who has former Vanderbilt offensive lineman Andrew Jelks as one of his assistant football coaches at Henry County.

“They really blew it out of the water with what they have to offer, especially from an offensive line standpoint,” Brown said. “Probably the greatest coaches in the country available and all the tools here to make it to the next level.”

It’s noteworthy to Brown that Pittman is the only SEC head coach to have been an offensive line coach first. He called that "really major" and mentioned Pittman's knowledge of the position.

“He always knows what he's talking about," Brown said. "He's genuine and up-front, and he's one of those guys that'll keep it real with you and give it to you straight, and I really like that about coaches, especially coaches who can do that and bring a team together.”

Arkansas jumped squarely into the mix Saturday after the offer.

“I could really see myself playing here,” Brown said. “My recruitment is still 100% open. I had a top schools list about a month-and-a-half ago, but a lot of changes have happened since then.

"They're easily up there in the top schools.”