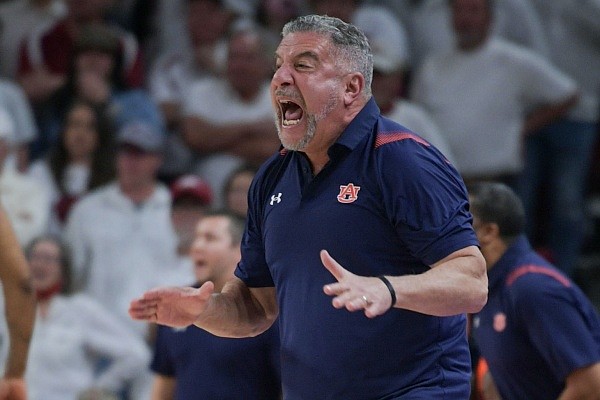 Bruce Pearl, head coach of Auburn, reacts on Tuesday, Feb. 8, 2022, during the first half against Arkansas at Bud Walton Arena in Fayetteville. Visit nwaonline.com/220210Daily/ for the photo gallery.

FAYETTEVILLE — Auburn won the SEC title with a 15-3 record by one game over Kentucky and Tennessee to claim its second regular season crown in five years to go along with the 2019 SEC Tournament title under eighth-year Coach Bruce Pearl.

The Tigers also shared the regular-season championship with Tennessee in 2017-18.

There can be little doubt a massive imbalance in conference scheduling certainly broke the Tigers’ way to create a less-hazardous path to the championship.

Auburn played by far the easiest collection of five double opponents among the contenders in the conference. The quintet of Alabama, Florida, Georgia, Ole Miss and South Carolina combined for a 32-58 (.356) league record, tying Texas A&M for the worst record of twice-played opponents.

None of those teams had a winning record in SEC play. The Tigers went 9-1 against them, with the lone loss coming at Florida, meaning they went 6-2 against the rest of the league, including road losses to Arkansas and Tennessee.

Contrast that with LSU’s five double opponents — Alabama, Arkansas, Kentucky, Tennessee and Texas A&M — which went 59-31 (.656), with none of those teams posting a losing SEC record. Three of the five earned double-byes for the SEC Tournament.

Of course Pearl and his players care little about the quality, or lack thereof, of their conference slate.

“It’s all about the players,” Pearl said. “To be 15-3 in this league says they came to play every night. We took no team for granted. They locked in, they grinded.”

Among the other teams with double-byes, Tennessee took on five double opponents (Arkansas, Kentucky, LSU, South Carolina and Vanderbilt) who went 52-38 (.578) in SEC play; Kentucky faced five (Alabama, Florida, LSU, Tennessee, Vanderbilt) who were 48-42 (.533) and Arkansas played a quintet of LSU, Mississippi State, Missouri, Tennessee and Texas A&M who went 45-45 in the conference to be the only SEC team whose twice-played opponents posted a .500 league record.

Auburn and Kentucky were the only SEC teams who went through conference play with no losses by double digits, while Missouri, Georgia, Florida, Ole Miss, South Carolina and Tennessee all suffered losses by 20 points or more.

SEC champion Auburn’s worst loss was by five points, 67-62, at Tennessee. Kentucky fell 80-71 at Auburn for its worst league loss.

Arkansas, Kentucky and Tennessee inflicted the worst losses on two teams each, while Mississippi State had one (81-68 over Arkansas), Missouri had one (78-52 at Ole Miss) and Florida had one (61-42 vs. Vanderbilt).

Arkansas forward Jaylin Williams was named on Monday to the “All-Glue” team as chosen by Seth Davis of The Athletic.

Williams, who has taken a program-record 48 charges, averages 10.8 points and 9.6 rebounds per game, ranking second in the SEC in the latter category. He’s also an adept passer with 81 assists, the third-highest total on the team behind JD Notae (109) and Davonte Davis (91).

Arkansas placed a player on the “All-Glue” team for the second year in a row, as Justin Smith made the list last year.

Expect Kentucky’s Oscar Tshiebwe to pull down conference player of the year honors in voting set to be released today by both The Associated Press and SEC coaches.

Tshiebwe is averaging 17.3 points and 15.3 rebounds per game in pursuit of becoming the first NCAA player to average 15 each since Drake’s Lewis Lloyd and Alcorn State’s Larry Smith both did it in 1979-80.

The 6-9, 255-pound Tshiebwe has 24 double-doubles on the season and 12 in a row entering the postseason.

“What separates him from a lot of bigs around the country is his conditioning and toughness,” said Ole Miss Coach Kermit Davis, whose Rebels gave up 18 points and 15 rebounds to him last week. “He’s just got such mental toughness when he is faced with fatigue.”

The Associated Press and SEC coaches will release their all-conference teams today and the Arkansas Democrat-Gazette joins suit with this three-team projection.

Player of the year: Tshiebwe, Kentucky.

Freshman of the year: Smith, Auburn.

Three of the four predetermined matchups in the first couple of rounds of the SEC Tournament will feature third-time matchups, starting with Wednesday night’s Ole Miss vs. Missouri game at 5 p.m. The Tigers swept two regular-season games from the Rebels for the first time since joining the league. Missouri won 78-53 in Oxford, Miss., then prevailed 74-68 in Columbia, Mo., in the second meeting.

Additionally, Vanderbilt swept Georgia, who are opponents in Wednesday’s late game. The Commodores won 73-66 at Georgia early in league play, then took an 85-77 decision at home.

Three of the SEC’s top 20 scorers have not made a single three-point shot on the season. That trio is Kentucky’s Oscar Tshiebwe, Florida’s Colin Castleton and Georgia’s Braelen Bridges, who led all qualifiers with 64.2% shooting overall.

Castleton went 0 for 8 beyond the arc, while Bridges and Tshiebwe did not attempt one.

The officials in Mississippi State’s 67-64 loss at Texas A&M pulled off a rarely seen event on Saturday. They took a point off the board. The Bulldogs’ Tolu Smith went to the free-throw line when Andersson Garcia was supposed to be there with 8:15 remaining in the Aggies’ 67-64 win.

Smith made the first of a one-and-one free-throw opportunity before the officiating crew went over to the monitor to check on who actually got fouled on a rebound play. After the review, the point was deducted and Garcia went to the line, where he made one of two shots.

Oddsmakers with sportsbetting.ag have installed Kentucky as the betting favorite to win the SEC Tournament. The Wildcats were at +190 by the website, meaning a $100 wager would pay $190 if they win the tournament.

“To go from first place in the first two weeks to 12th place six weeks later and then to finish tied for fifth speaks to the character and the fabric of who our guys are. … I do think we’re in a good groove.” — Texas A&M Coach Buzz Williams after the Aggies closed the season with a 5-1 run