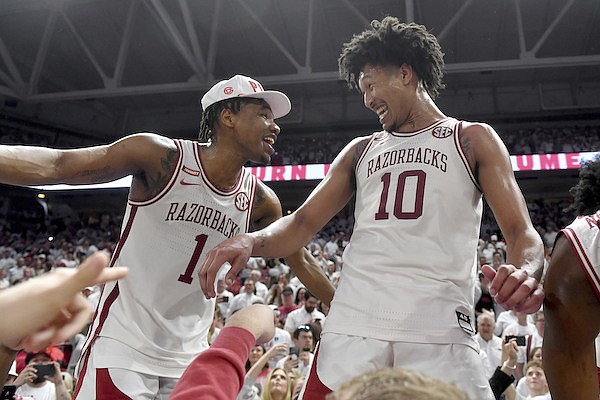 FAYETTEVILLE — JD Notae and Jaylin Williams are in good company.

The best when it comes to the University of Arkansas men’s basketball program.

Notae and Williams on Tuesday became the first Razorbacks’ duo to be voted to the All-SEC first team by the league’s coaches since 1995 when Corliss Williamson and Scotty Thurman did it for Arkansas’ defending national championship squad.

The coaches’ first and second teams each included eight players.

“Those are household names here in Arkansas,” Williams, a sophomore forward from Fort Smith, said of Williamson and Thurman. “You hear about what they did for the state of Arkansas.

“What they did for their team and the rep that they have here in Arkansas, it’s crazy just being mentioned in the same category as those two guys.”

Notae, a 6-2 senior guard playing his second season for the Razorbacks after transferring from Jacksonville (Fla.) University and redshirting, is averaging 18.9 points, 4.4 rebounds, 3.6 assists and 2.2 steals in 33.5 minutes per game. He scored 31 points at Texas A&M and 30 against Kentucky and Mercer.

Todd Day and Lee Mayberry, as Arkansas seniors in 1992, were voted All-SEC by the coaches in the Razorbacks’ first season in the conference, but there was only one team with 11 players.

The No. 15 Razorbacks earned a double-bye in the SEC Tournament and play in Friday’s quarterfinals against either LSU, Missouri or Ole Miss.

“That was amazing to see, me and Jaylin, even more when you see [Williamson and Thurman] got that award,” Notate said of he and Williams making the All-SEC first team. “For us to be the first two since [1995] is a credit to our teammates, our coaching staff and just us being us.”

Neither Notae nor Williams were picked for preseason All-SEC recognition by the coaches or members of the media.

“I’m really proud of both those guys.”

Notae and Williams also were among 10 players who received All-SEC recognition from The Associated Press media voters.

Notae, who has another season of college eligibility if he decides to use it, was a unanimous first-team All-SEC choice and Williams made the second team.

“We all knew what JD could do, and to see everybody else seeing what he could do is great.”

Williams, known for his rebounding and passing coming into the season, averaged 6.8 points the first 14 games.

Over the past 17 games, Williams has averaged 14.2 points and had 12 double-doubles. He had a career-high 22 points at Alabama and 19 against LSU and South Carolina at home.

“We’ve been telling him, he’s got to shoot more,” Notae said. “So just seeing him growing from an offensive angle was pretty good.”

Williams said he feels pretty good about being honored by the SEC for his defense as well. He joined Mayberry and Daniel Gafford (2019) as the only Razorbacks to be voted first-team All-SEC and to the SEC All-Defensive Team.

“I’ve always taken pride in my defense,” Williams said. “Defense is one of the funnest parts of the game to me.

“I love playing defense. I love leaving it all out on the floor for my teammates.”

The best combined game by Notae and Williams arguably was against SEC champion Auburn, when the Razorbacks beat the then-No. 1 Tigers 80-76 in overtime at Walton Arena on Feb. 8.

“He can win a game all by himself,” Pearl said of Notae on Tuesday. “You can do everything right … and he’s the kind of guy where it really doesn’t matter.

“Because he can just jump up and beat you all by himself. Very special talent.”

“I got to know Jaylin and his family really well,” Pearl said. “He had an official visit here.

“I thought he was going to be a great player. Just a terrific inside-out player offensively and defensively.

“Great kid. Great competitor. He wanted to stay home, and he wanted to play for the Hogs and make history there in his home state. I respect him for that.”

Notae and Williams on Tuesday repeated some Arkansas history not seen since the days of Williamson and Thurman.

“Both those guys are going to continue to get better, too,” Musselman said. “They have a future where they haven’t hit their ceiling, either one of them.”