Razorbacks not looking for a pat on the back 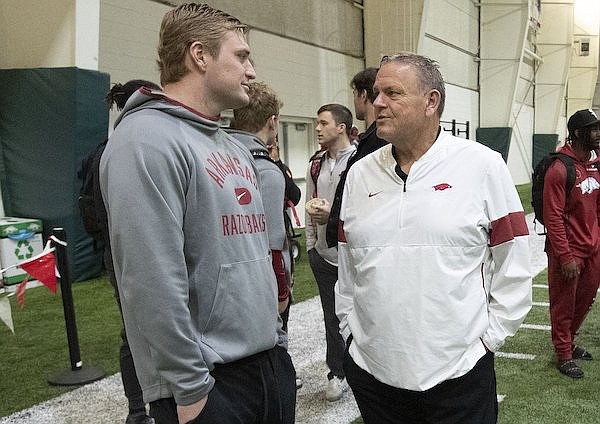 It masked my uncontrolled laughter as Pittman said exactly what I figured he’d do with a No. 6 national ranking from Fox Sports football writer RJ Young.

Pittman’s first two years at Arkansas have been easy as far as motivation. The Hogs were at the bottom of the college football world — the abyss in my words — so they worked with a chip on their shoulders.

My question: How would the Hogs keep that chip on their shoulders with preseason rankings like Young’s and others sure to come their way?

“If nobody says anything bad, we will make it up,” Pittman said. “Regardless, who we are is a chip-on-the-shoulder team.

The Hogs were ranked No. 21 in the final Associated Press poll after the bowl games. That’s more than fair considering they finished 9-4. Only Pac-12 champion Utah at No. 12 was rated higher with four losses.

Pittman preaches work ethic and that seems to be what his team repeats the most. They were tired of hearing bad things about them the previous four or five seasons, although no one argues that it wasn’t deserved.

That doesn’t mean they don’t believe they can play with the nation’s elite teams. They stayed with Alabama to the bitter end in a 42-35 loss in the next-to-last week of the regular season.

“We have extreme confidence,” Pittman said after his initial push back on Young’s No. 6 rating.

“We have a lot coming back. We have our quarterback back and we have a safety back that played about a half of a season.

“But I think it would be hard to believe that teams, as the season went along, overlooked us last year.

“I promise our team is not going around patting ourselves on the back. Our No. 1 goal is to make this state proud.”

Young is clearly a believer in Pittman and the Hogs, as has been the trend of late at many other places around the country. This is Young's pre-spring top 10: Alabama, Texas A&M, Ohio State, Georgia, Baylor, Arkansas, Notre Dame, Utah, Ole Miss and Michigan State.

It’s not clear what Young likes most about the 2022 Razorbacks, but where they look to be gaining momentum is clearly in the offensive line. Sure, quarterback KJ Jefferson has some great backs (Dominique Johnson, Raheim Sanders and Dominique Johnson), but it’s an improving offensive line that gets my attention.

The Hogs lost only left tackle Myron Cunningham as a starter in the offensive line from last year. Utility specialist Ty Clary also finished his eligibility. But it’s a good-looking, physical bunch that is coming back.

Pittman’s third offensive line group is starting to look more like the unit he left at Georgia, with some big new challengers, including several in the freshly enrolled freshman class.

There was high praise for redshirt freshman Devon Manuel (6-9, 366 pounds) and junior Ty’Kieast Crawford (6-5, 347). Pittman said both of those have retooled their huge bodies with lost weight and body fat in both cases.

“Devon has lost a lot of weight,” Pittman said, later adding that drop is 25 pounds. “Crawford has changed his body and work ethic.”

The offensive line has competition everywhere, although it might be more for the backup slot at center where Ricky Stromberg returns. Pittman said the spring goal is to try to find four centers for a 10-man travel squad along the offensive line. Marcus Henderson, converted from tackle, might be one of those.

“I think we’ve found his spot,” Pittman said of Henderson. “I really do.”

As far as the every year improvement in the offensive line, Pittman said, “I hope we have one of the better ones in the SEC. We’ve got experience. And, we have the man in the middle (in Stromberg). He’s changed his body, too.

“We are stronger. We think we have two tackles. We still have to figure out who that left tackle is, but we think we’ve got him here on campus.”

Most thought Manuel was a project when Pittman plucked him from Sunset, La.

“He’s an athlete,” Pittman said. “He played some basketball.”

That’s important. Pittman said it’s not just about huge size, although that’s always been his preference.

“I like (size) if they have the feet and the quick twitch,” Pittman said. “That’s what stands out about Crawford. He’s got foot speed. I think Devon does, too.

“We have depth. I want to develop four legit centers and travel them. Luke Jones can play there. Beaux Limmer can, too. Maybe Josh Street and Marcus Henderson can be one of those, too.

“Most teams only get to three who can snap it. We want to be at four. I really like Henderson.”

The goal this spring — and this helps the defensive line, too — is to become more physical in short-yardage situations.

“We think we got better there (last year),” Pittman said. “We’ve got to be better. We’ve got to better on third down. That’s a big emphasis (this spring).”

Another thing Pittman wants to look at this spring involves analytics, although that produced another chuckle from the head coach.

“I don’t know if I can ever go for it (on fourth down) from my own 18,” he said, noting it may be difficult for him to embrace some things analytics suggest of for him to understand them as a head coach.

That’s something that can’t be just made up. The Hogs will get to work Sunday to figure out some of those issues and try to continue to work their way toward the top of national rankings.

For sure, they are no longer falling through the abyss.