Scouts flock to Fayetteville to watch Burks, others 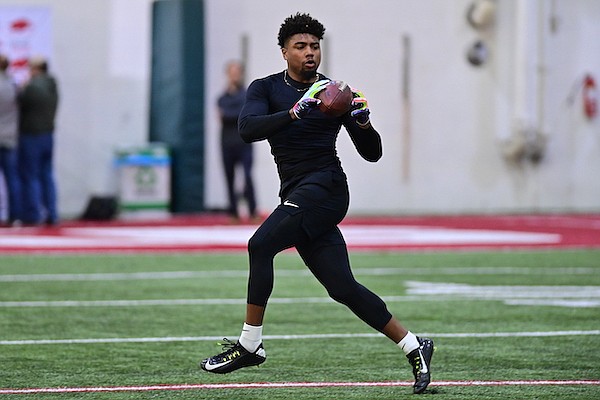 Former Arkansas receiver Treylon Burks goes through a workout during the Razorbacks' Pro Day on Wednesday, March 9, 2022, in Fayetteville.

FAYETTEVILLE — The University of Arkansas’ annual football pro day featured a blend of potential first-round talent in wide receiver Treylon Burks all the way to some players who know their professional careers will have to start as undrafted free agents.

Scouts representing 30 of the 32 NFL teams were on hand to time, test and evaluate drill work from 13 former Razorbacks, led by Burks, an All-American who is a candidate to be the first receiver taken in the NFL Draft, which is set for April 28-30 in Las Vegas.

Burks turned in an official 4.55-second time in the 40-yard dash at the NFL Scouting Combine last week and did just three drills inside the Walker Pavilion on Wednesday, including 12 reps of 225 pounds on the bench press, plus the on-field workout. The 6-2, 225-pound Burks caught passes from former Arkansas quarterback Jack Lindsey along with receivers Tyson Morris and De’Vion Warren, versatile skill athlete T.J. Hammonds and tight end Blake Kern.

Burks was asked what he thought about the talk of his 40 time from Indianapolis.

“You know me. I don’t care what nobody thinks,” he said. “All I can say is go watch film and see if I’ve been caught with that 40 time.”

“They like my film. They like the way that I communicate,” Burks said. “I’m very respectful and I’m a man about my business. I go about my business the right way. That’s me. I’m not a flashy player. I go to work every day, get done with work, go home to my fiance and my dogs and just keep doing that process.”

Burks got engaged on Jan. 1 to Shelby Pearlman, who attended pro day along with Bo Hembree, his coach at Warren High School, and his Arkansas-based representative J.R. Carroll.

The other Razorbacks going through testing Wednesday were linebackers Deon Edwards and Grant Morgan and defensive lineman Markell Utsey.

Brown, who tied for the SEC lead with five interceptions last season, said he tested better at pro day than at the combine.

He also said he believes his cross training as a safety and nickel back, in addition to cornerback, could help pay off in the pros.

“I’m willing to do anything,” he said. “Versatile, so wherever they need me. That’s my advantage, playing safety. I’ve got history playing safety, so if they need me to switch to safety I feel like I’ll be just fine.”

Ridgeway, a graduate transfer from Illinois State, said the Senior Bowl and combine invitations were a form of validation where he still had to prove himself.

“A lot of people didn’t really give me respect coming from Division I-AA going straight to the SEC,” he said. “They were kind of just like ‘Oh, maybe he got lucky. We don’t have a lot of film on him against good talent.’ I kind of just used that as motivation for the Senior Bowl and tried to display my dominance on them, show them that I am a top-100 draft pick and I am a good interior D-lineman.”

Cunningham put up 26 reps on the bench press, the highest among the Razorbacks.

He said the combine and the pre-draft experience have been exciting after capitalizing on his bonus year due to covid allowances.

“It just gave me another season to showcase what I can do in arguably the best conference in America,” Cunningham said. “I think … it helped me showcase it and helped me get bigger, stronger, faster and more prepared.”

Burks and Williams, in their first interviews with local reporters since Arkansas’ 24-10 win over Penn State in the Outback Bowl, were asked about opting out of the game.

“It was real difficult,” Burks said. “That was just the talk I had with my family and my great grandmother, and I was willing to sacrifice that for her and just I wanted to make her dreams come true and also mine.

“I’ll say one thing though, the team was very respectful. They reached out to me and congratulated me for having the opportunity to do that. That just made me feel even better and I’m just thankful for being part of the team.”

Williams opted out shortly after his arrest on suspicion of driving while intoxicated.

“They asked about my hiccups that I’ve had off the field,” Williams said of the combine. “And it’s all about maturity. It’s all about overcoming adversity, and realizing and being aware of your situation and just growing from it.

“I did hate missing [the bowl] and to not be there with my team because we did everything together. We prepared for this season.”

Linebacker Grant Morgan, who took a lack of scholarship offers and turned himself into an All-American and the winner of the Burlsworth Trophy, given annually to the best player who began his career as a walk on, said he’ll take that same mentality toward being left off invitation lists to the premier all-star events.

The 5-11, 225-pounder was direct as always in talking about his approach to the next level of football and why he dropped weight for pro day.

“I was blunt and straight up,” Morgan said. “I was fat. In season, you get a little chubby. But I thought the best way to perform today was to get a little lighter.”

Morgan posted a 34.5-inch vertical jump and 21 reps on the bench press Wednesday.

He said he’s motivated by not receiving an invitation to the combine.

“Add on to the chip, I guess you could say,” Morgan said. “My shoulders getting heavy. But it’s just like, I hated I didn’t get invited, but nothing like that’s going to stop me or ruin my mood.

“At the end of the day, I’m an inside linebacker and I can play and I can do it really well, and I think if I get drafted first round or go undrafted free agent, I’m going to work just as hard.

“I think that’s what people don’t realize. When I get there, it’s going to be hard to cut Grant Morgan.”

Like Morgan, Morris said his super senior year was rewarding for himself and the program because it helped Arkansas ascend to a 9-4 record, its best since 2011.

“I definitely feel like I finished better than I started or the middle of my career,” he said. “I finished strong. That is what I feel like. Enough to get some recognition.”