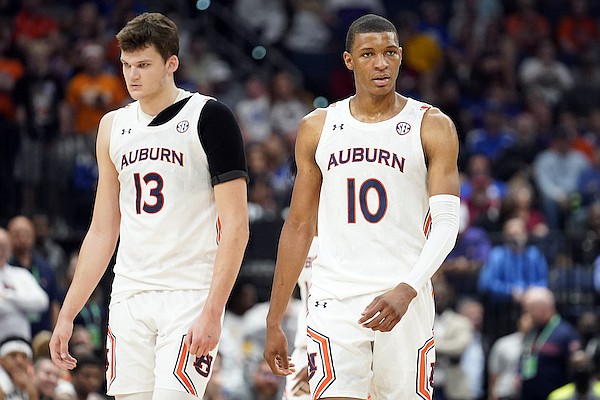 TAMPA, Fla. — Texas A&M isn't done reviving its season after an arduous, month-long tailspin threatened its chances of earning a spot in the NCAA Tournament.

The Aggies improved to 7-1 since an eight-game skid, bolstering their case to get at least an at-large berth with a 67-62 victory over fourth-ranked Auburn in the quarterfinals of the Southeastern Conference Tournament on Friday.

“It's something that we needed to go through. Everything that we went through earlier in the season literally has prepared us for now. Every game that we lost was a test,” Aggies leading scorer Quenton Jackson said.

Tyrece Radford scored 19 points and Jackson made five throws in the final minute Friday as the Aggies avenged a 75-58 loss in February to the SEC regular-season champions and advanced to Saturday's semifinals against No. 15 Arkansas.

Jackson also had a dunk and a key block late, finishing with 17 points and helping Texas A&M (22-11) follow up an 83-80 overtime victory over Florida with another strong outing. Auburn (27-5) was presented with the regular-season trophy before the game, then struggled mightily.

“Give A&M credit. They played inspired. They played like their hair was on fire because they're trying to get into the NCAA Tournament,” said Auburn coach Bruce Pearl, who urged his team to keep the loss in perspective with the start of the NCAAs less than a week away.

“We wanted to win this championship. We wanted to build momentum going in, and we got beat by a really good team,” Pearl added. “But our guys are pretty humble and pretty hungry. We still are.”

Jabari Smith led Auburn with 17 points. Walker Kessler had 16 points, while Wendell Green Jr. made four long 3-pointers to fuel a late comeback that fell short when Jackson delivered a dunk coming out of a timeout and went 5 of 6 from the foul line down the stretch.

Auburn, ranked No. 1 much of the winter, fell to 3-3 over its last six games.

“They're one of the most talented teams — not only in our league, but in our country,” Texas A&M coach Buzz Williams said. “Their talent overwhelms you, and it's hard to decide how you're going to play them.”

Texas A&M won 15 of 17 games to start the season and was 4-0 in the SEC before hitting its tough stretch. The final loss in the skid was at Auburn, and the Aggies have been on a mission to rescue their season ever since.

Williams said he's doesn't know if the Aggies have already accomplished enough in Tampa to ensure a bid when the NCAA Tournament field is announced on Sunday.

“We’ve won two games. Is that enough? I don’t know," the Aggies coach said. “I am wise enough to understand that if we would not have won seven of our past eight, it wouldn’t even be a conversation.”

For the second straight day, the Aggies started strongly in building a double-digit halftime lead. But unlike Thursday, when Florida rallied to force overtime, Auburn was unable to fully overcome 16% shooting that left the Tigers trailing 37-21 at halftime.

Green made four long 3s from the same spot on the court to help Auburn get back in the game after missing seven of his first eight shots.

Henry Coleman had 16 points, helping Radford carry Texas A&M much of the afternoon while Jackson was riding the bench with three fouls.

Josiah-Jordan James led five players in double figures 16 points, 14 of them during a six-minute stretch in which ninth-ranked Tennessee pulled away to a 72-59 victory over Mississippi State in the quarterfinals of the SEC tournament on Friday night.

The Volunteers (24-7) won for the 10th time in 11 games to advance to Saturday’s semifinals against No. 5 Kentucky.

Kennedy Chandler had 11 points for Tennessee despite missing time in the first and second half after suffering what appeared to be a right foot or ankle injury. He finished the game, though, making a layup for the final margin of victory.

James and Chandler were joined in double figures by Zakai Zeigler (11), Brandon Huntley-Hatfield (10) and Santiago Vescovi (10) for the Vols, who led 39-37 at halftime.

Shakeel Moore led Mississippi State (18-15) with 15 points. Tolu Smith had 14 and Iverson Molina, the SEC’s third-leading scorer, finished with 10 on 3 of 9 shooting.

The 10th-seeded Bulldogs advanced to the quarterfinals with a 73-51 tournament-opening victory over South Carolina. They lost to Tennessee at home by 19 in early February and kept Friday’s game close until James led a surge that helped the Vols open a double-digit lead early in the second half.

James made his first five shots after halftime, four of them of 3-pointers. By the time Chandler returned to the bench after receiving attention for his injury a second time, Tennessee was up 13 and in complete control without the freshman guard.

Vescovi’s 3-pointer hiked Tennessee’s lead to 68-54 and the closest Mississippi State got over the final five minutes was 11.

TyTy Washington hasn't played like this in nearly two months. He hasn't needed to, either.

After taking a backseat to standout forward Oscar Tshiebwe late in the regular season, Washington stepped into the spotlight Friday night and put Kentucky on the verge of a No. 1 seed in the NCAA Tournament.

Washington scored 25 points, Tshiebwe tied a half-century-old school record and the fifth-ranked Wildcats beat Vanderbilt for the third time in two months, 77-71 in the quarterfinals of the Southeastern Conference Tournament.

Washington was at his best during a second-half spurt, scoring eight straight points that helped the third-seeded Wildcats (26-6) create a little breathing room in a back-and-forth game. The freshman hit consecutive 3-pointers from the corner, just a few steps from Kentucky’s bench, and then sank a floater in the lane that barely tickled the net and made it 69-60.

He added four free throws in the final 19 seconds to seal the victory inside a packed, pro-Kentucky crowd at Amalie Arena. Washington made 8 of 17 shots, including 4 of 5 from behind the arc.

Tshiebwe, a national player of the year candidate, notched his 14th consecutive double-double and 26th of the season with 12 points and 14 rebounds. That matches the single-season mark set by Kentucky great Dan Issel in 1969-70.

Kentucky won for the 15th time in its last 18 games and moved a step closer to securing a No. 1 seed in the upcoming NCAA Tournament. A win Saturday should do it: The Cats advanced to play No. 2 seed Tennessee in the second of two semifinals.

Tshiebwe also had a career-high five blocks, and the Wildcats needed every one of them and then some to hold off the pesky Commodores (17-16) for the third time eight weeks.

Kentucky looked like it was going to pull away in the second half when it used a 15-1 run to turn a seven-point deficit into a seven-point lead. But Vandy coach Jerry Stackhouse called timeout to regroup, and the Commodores clawed their way back.

Scotty Pippen Jr. — his famous NBA father cheering behind the Vandy bench — wasn’t nearly as effective as he’s been all season or in either of his first two games against Kentucky (32 and 33 points, respectively).

Pippen ended up with 10 points and seven assists in the quarterfinal matchup, missing 15 of 17 shots from the field and 6 of 7 from 3-point range. He only got to the free-throw line five times, an off night for a guy who essentially lives at the charity stripe.

Jordan Wright picked up the slack, scoring 27 points on 10-of-12 shooting. It wasn't enough against a Kentucky team with so many options and answers — and the crowd behind it.