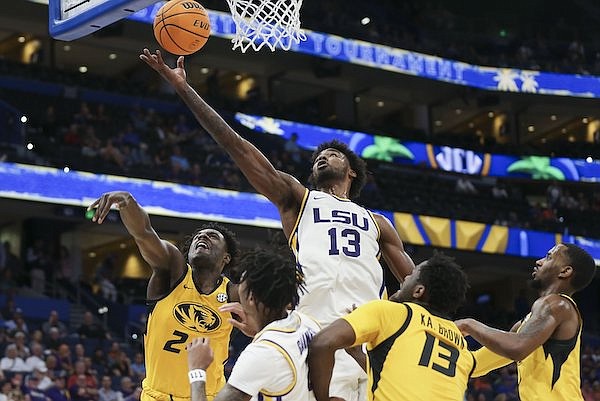 LSU forward Tari Eason (13) goes up for a shot during an SEC Tournament game against Missouri on Thursday, March 10, 2022, in Tampa, Fla.

TAMPA, Fla. — It is not supposed to be easy to beat a team three times in one season, and it got a lot harder for the Arkansas Razorbacks after Missouri no-showed for its game with LSU on Thursday.

OK, it wasn’t a total no-show. The Tigers of Missouri were there, in their uniforms, but they couldn’t compete with the Tigers of LSU.

It is supposed to help a team to get a double-bye in the SEC Tournament, but whatever advantage the Razorbacks were supposed to have may have become a disadvantage. The Tigers of LSU used about half the energy they would have in a full practice.

Basically what they got was an extended shootaround on the Amalie Arena court.

Arkansas swept both sets of Tigers in the regular season, narrowly escaping LSU at Walton Arena 77-76 in a game that was determined a lot by how badly the visitors played in the final two minutes.

However, it wasn’t anything compared to how Missouri was dominated Thursday afternoon.

It was like someone didn’t tell Missouri it beat Ole Miss the night before, and the Tigers just happened to show up with their uniforms.

Maybe Missouri’s misery was the Tigers left it all on court against the Rebels, but more likely they just couldn’t match up with LSU on either side of the court.

In the opening 20 minutes, Missouri had 15 turnovers that LSU cashed in for 21 points.

At the half, Missouri had the same number of field goals as it did personal fouls — nine.

It had three shot-clock violations and two back-court violations.

It was a minor miracle that the Tigers had more rebounds than turnovers.

LSU came out firing on all cylinders and led 34-9 before the team started letting up a little.

It was psychological for Will Wade’s Tigers, who will be a No. 6 or No. 7 seed next week in the NCAA Tournament.

They had already put the opponent down. What was there left to prove?

Wade stayed on them hard.

He wanted to see perfection in the execution on both ends of the court, but it didn’t appear LSU even broke a sweat in the first half.

It definitely never became an uncontrolled practice, that whoever had the ball was shooting it.

The LSU Tigers made 28 of 50 field-goal attempts, and 18 of the makes came with an assist.

Missouri did try to pick it up in the second half and pulled to within 45-35, but LSU snapped out of its stupor and ran off 12 straight points. Even the hardcore fans were spending more time on their phones than watching the game.

The final score, 76-68, was not indicative of how much LSU controlled the game. Missouri closed the game on 9-0 run.

When these teams met earlier, LSU was easily the winner, too. In Baton Rouge, it won 75-55.

This has been a tough season for Missouri, which was 12-21 overall and 5-13 in the SEC’s regular season.

The Tigers have only eight players, but for most of the game, it was like they knew they couldn’t match up with the quicker and more athletic Tigers from LSU.

So the Razorbacks didn’t catch a big break.

LSU won’t have tired legs. It won’t hit the wall in the second half today.

The Tigers do have a better feel for the court, but sitting courtside was Arkansas Coach Eric Musselman.

As usual, he was leaving nothing to chance, as he and his staff personally scouted every second, and there was a lot of whispering going on.

It is hard to beat a team three times in one season, especially one as loaded as LSU, which has a NCAA NET ranking of 17. But Arkansas is No. 20, despite beating LSU twice as well as Auburn, Kentucky and Tennessee, the top three teams in the SEC.