5 things to know about Vermont 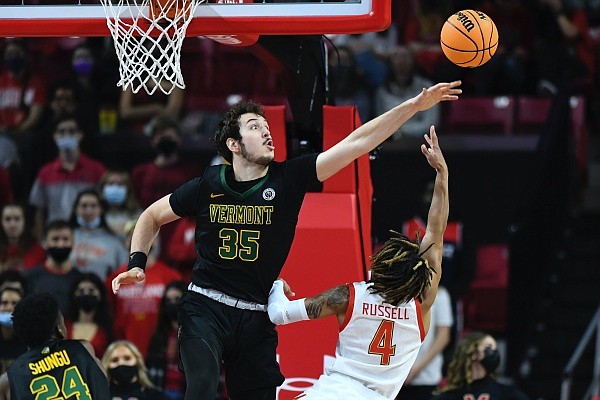 The Catamounts are on a roll

Vermont is used to winning big.

The Catamounts, who will enter Thursday’s game 28-5 overall and fresh off an America East Conference Tournament title, has won 14 games this season by at least 15 points. And they have coasted to this point in their postseason run.

In three games in its conference tournament, Vermont won each game by at least 30 points, holding Binghamton and Maryland-Baltimore County to 42 and 43 points, respectively, in 32-point and 39-point victories. It routed the New Jersey Institute of Technology by 39 points in its opening game.

Vermont has won 22 of its last 23 games, and the Catamounts have not lost a game in regulation since Dec. 7 at Providence. They lost that game 68-58 on the road.

Since the loss, the Catamounts have not played a team inside the top 115 in the KenPom ratings. Vermont is 1-2 against KenPom top-100 teams, its win coming Nov. 11 against Northern Iowa.

The Catamounts also lost a road game at Maryland on Nov. 13.

But, Vermont played its schedule as best as it could.

Since the loss to the Friars, the Catamounts have operated at a high clip on both ends of the floor. According to HoopLens analytics, they scored 1.15 points per possession and allowed 0.90 PPP in that span.

The Razorbacks will have their hands full with Ryan Davis

Arkansas forward Jaylin Williams and his front-court teammates have faced skilled big men throughout this season. They will meet another one Thursday who intends to send them home early.

Davis, a 6-8, 250-pound forward who is in his fourth season with the program, was named America East player of the year for the second consecutive season.

He is averaging a team-best 17.2 points per game on 59% shooting and 42.3% from three-point range on 97 attempts. Davis is also second on the team in rebounding at 5.7 per game.

He is an efficient offensive player and owned the No. 1 offensive rating in conference-only games (138.3), according to KenPom.

Davis has been nearly automatic around the rim this season, finishing 79.8% of his attempts within four feet of the rim, per CBB Analytics. He averages a team-high 9.4 paint points per game.

He has scored in double figures in 24 consecutive games played and added 20-plus points six times in that stretch. Davis finished with 19 points at Providence and eight against Maryland.

Defensively, he leads Vermont with 24 blocks.

Among Arkansas coach Eric Musselman’s first comments once the Razorbacks’ opening-round opponent was revealed was about Vermont’s marksmanship from three-point range.

The Catamounts are among the top perimeter shooting teams in college basketball. To this point in the season, they have shot 36.4% from three on a whopping 703 attempts. In conference games, they hit 41% of their looks.

According to KenPom, 43.1% of Vermont’s field goal attempts have been threes.

Eight Catamounts players have knocked down at least 22 three-pointers, led by guard Ben Shungu’s 63 on 41.4% shooting. Two others, Finn Sullivan and Ryan Davis, will enter Thursday with 40-plus makes.

Shungu has knocked down three-plus three-pointers in 11 games, and against league competition he made 41 of 80 attempts. Davis and Sullivan have each hit multiple threes 12 times.

If Vermont is not taking a shot in the lane or at the rim, there is a good chance it is pulling an above-the-break three. According to CBB Analytics, the Catamounts’ third, fourth and fifth-most often taken shots come from the left wing (12%), top of the key (10.3%) and right wing (10.1%), respectively.

Only 10% of the team’s shots are taken from the corners.

In conference games, the Catamounts made 45.1% of their threes from the left wing and 45.5% from the right wing.

Shungu ranks in the 98th percentile nationally in three-point percentage (50.8%) on threes attempted 25-plus feet from the rim. He takes two such threes per game on average.

According to KenPom data, the Razorbacks have posted an offensive rebound rate above 30% in 20 games this season, including a season-high 46.9% in the 86-66 home victory over North Carolina-Charlotte on Dec. 7.

The Razorbacks will carry into the NCAA Tournament six players who have 34 or more offensive rebounds. Au’Diese Toney, the 6-6 wing from Pittsburgh who will be making his tournament debut against the Catamounts, leads the team with 75.

Vermont is going to make Arkansas work for second chances. According to KenPom, the Catamounts are No. 1 in the country in opponent offensive rebound percentage (18.7).

Twenty times this season Vermont has limited its opponent to an offensive rebound rate under that season average. It is 19-1 in those games.

Three Catamounts players have at least 125 defensive rebounds, led by 6-6 forward Isaiah Powell, who has 172. According to KenPom, Powell has a defensive rebound rate of 21%. Ryan Davis’ is 19.5%.

Three other Vermont players have totaled at least 78 defensive boards.

The Catamounts are solid on the interior on both ends

While a lot of the attention in this game will likely be paid to the play of those roaming the perimeter, and rightfully so, the outcome may boil down to which side is most effective inside the arc.

In addition to being better than 40% three-point shooters, Ryan Davis and Ben Shungu both shoot over 60% on two-point looks. On field goal attempts in the lane, they have hit 54.2% and 54.9% of their shots, respectively.

In the Razorbacks’ final 16 games of the regular season, they limited opponents to 43.6% shooting inside the three-point line. Prior to Jan. 12, that figure was 49.6%.

Defensively, the Catamounts’ opponents have struggled in the lane outside the restricted area (39.6%) and on two-point shots left of the lane — 31 of 129 (24%), according to CBB Analytics.

Vermont, however, does not reject many shots. It holds a team block rate of 7%, which ranks 266th nationally. The Catamounts’ 6.6% block rate was next to last in a 10-team league.

The Razorbacks have the ability to take advantage here.