After win over Hogs, the Aggies deserve a bid 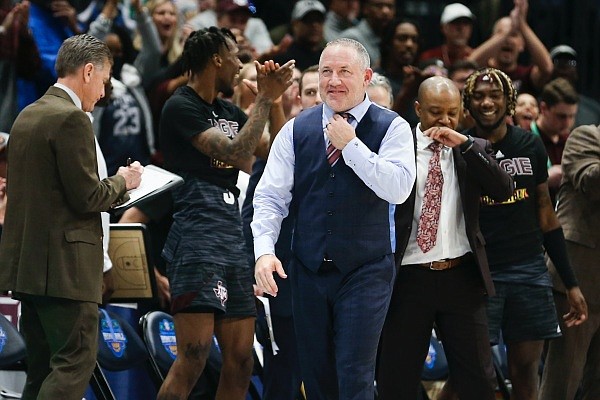 Texas A&M head coach Buzz Williams reacts, Saturday, March 12, 2021 during the second half of Arkansas's 82-64 loss against Texas A&M in the SEC tournament semifinal at Amalie Arena in Tampa, Fla. Check out nwaonline.com/220313Daily/ and nwadg.com/photos for the photo gallery.

The No. 8-seeded Aggies contested almost every Arkansas shot, especially three-pointers, while hitting 8 of 15 from behind the arc on their way to Saturday’s 82-64 SEC Tournament win.

Give the Aggies credit for putting together what was probably their best effort of the season and should have proved they belong in the NCAA Tournament.

Going in, the Razorbacks were expected to have their way with the Aggies, who played their third game in three days, while the Hogs were playing their second in two.

Instead, they hit their first two threes and never trailed in a game they led 82-59 with 1:21 to play.

Like Arkansas’ Eric Musselman, Williams’ players play hard for him. He can be demanding and last year had nine players transfer. But when faced with adversity, the A&M coach may be at his best.

More from WholeHogSports: Musselman not ready to talk NCAA Tournament

No one knew exactly what to expect from the Aggies, who slumped in the midseason, losing 9 of 10 games after starting the season 16-1.

Then Williams benched starting point guard Marcus Williams, who then quit the team.

It has been called a leave of absence, but since he left the team the Aggies are 7-0.

Williams uses a four-guard offense, and without Williams he refused to name a specific point guard, so everyone handles the ball although Quenton Jackson seemed to run the offense more than anyone against Arkansas.

He had 6 assists but also had 20 points and 5 rebounds.

The rebounding wasn’t even close.

They had 13 second-chance points.

They also had 18 points off turnovers, and the critical stat was they got 29 points from their bench.

Jackson logged 33 minutes but was the only starter to have more than 30.

Only two teams have ever been able to win the SEC Tournament by winning four games in four days, Arkansas in 2000 and Georgia in 2008. But if the Aggies can play back to how they played against Arkansas, don’t count them out.

Granted the Razorbacks were hurt by JD Notae getting in foul trouble, but their long-distance shooting was frigid.

Stanley Umude was 3 of 5 behind the arc, the rest of the team was zero for Saturday, missing all 13 attempts.

It was almost like the Aggies stole Arkansas’ offensive and defensive attacks.

At the half, both coaches had to make adjustments to get more screens so they could get better looks.

The first half was like two heavyweights going at it for the world championship.

More from WholeHogSports: Analyzing Arkansas' loss to the Aggies

The Razorbacks got a couple of field goals in the first half on the right side and Williams adjusted his defense to shut that down.

Down the stretch, Musselman took a timeout, drew up a couple of plays and the Razorbacks went on an 8-0 run to get within 47-44 with 12:13 to play.

It looked like the Razorback magic was back in play, and surely the A&M players’ legs were dying.

Williams grabbed a timeout, and the Aggies went on an 11-3 run, holding the Hogs to three free throws.

With eight minutes to play, A&M led 60-52 and a little over two minutes later they made a jumper, had two three-point plays and a dunk, and it was time to turn out the lights.

It was a game of defense and the Aggies may have had their best effort of the season. For the most part the officials let them play, but the past seven games have been addition by subtraction for the Aggies, and today they play for the SEC Tournament championship and deserve a NCAA Tournament bid.