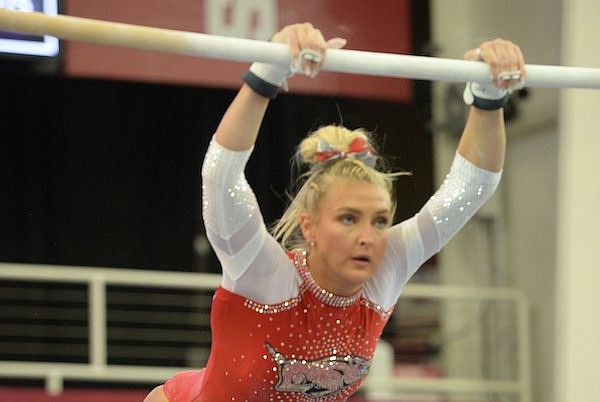 Arkansas' Sarah Shaffer competes Friday, Jan. 7, 2022, in the bars portion of the Razorbacks' match with Ohio State in Barnhill Arena in Fayetteville.

The University of Arkansas, trailing host Denver and Oregon State heading into the final rotation, turned in a school-record 49.5 on the vault to win a quad meet with a 196.975 on Sunday at Magness Arena in Denver.

The No. 18 Razorbacks (6-9) won their first road meet of the season heading into the SEC championships on Saturday in Birmingham, Ala.

The senior quartet of Amanda Elswick, Kennedy Hambrick, Sarah Shaffer and Savannah Pennese all posted 9.925s on the vault to place third in the event. The scores were career highs for Elswick and Pennese. Freshman Leah Smith had the final counting score of 9.8 on the event.

Arkansas also had a four-way tie for third on the floor exercise, with Hambrick, senior Bailey Lovett, and freshmen Maddie Jones and Smith all posting 9.875s.