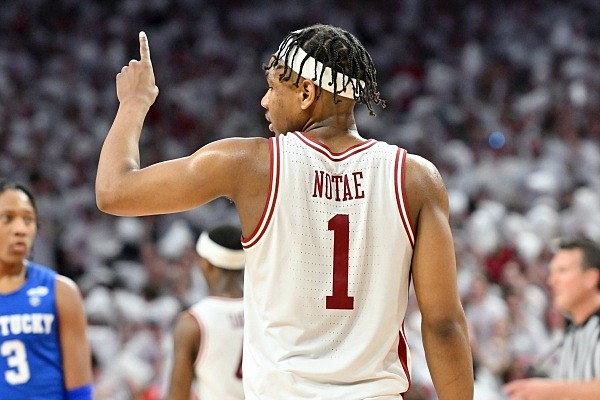 For the Razorbacks, he is the star point guard, the engine that makes Arkansas coach Eric Musselman’s team go. Notae, a 6-2 senior, is capable of producing jaw-dropping performances in big moments and electric scoring runs that alter the complexions of games before opponents know what hit them.

As he put up 18.9 points during the regular season and 19.7 points in the Razorbacks’ run in league play, he vaulted from SEC Sixth Man of the Year to a key cog on a No. 4 seed in the NCAA Tournament and one of the best players in the country in the eyes of many.

Earlier this month he joined elite company in program history — Marvin Delph, Sidney Moncrief, Todd Day, Corliss Williamson and Bobby Portis — when he picked up an All-America nod by The Sporting News. On Tuesday, he received third-team honors by The Associated Press and became the first Arkansas player to make one of the top three AP teams since Portis in 2015.

But one aspect of Notae’s makeup that perhaps does not receive its just due is his humility. Those who know Notae best recognize his gifts as a basketball player.

On a personal level, they label him as appreciative.

“It comes from his life and how he’s grown up,” Rick Rasmussen, Notae’s high school coach at Newton High School in Covington, Ga., said. “Not coming from a lot, he doesn’t take anything for granted.”

The gratitude he has for the people who have greatly impacted his life shined through the night before Arkansas’ win over LSU in the SEC Tournament in Tampa, Fla.

Notae and Rasmussen spoke over the phone. The coach simply wanted to check in, wish him luck in games on the horizon and express the sense of pride he has watching his former star on the stage he always strived to be on. Then came a heartwarming proclamation from Notae that will stick with him for years.

“He said, ‘It all started with the fundamentals, Coach. You gave me those. That’s why I am where I am,’” Rasmussen recalled. “I thought that was really nice that he would acknowledge that. If you look at his journey with us, there were things he overcame growing up being raised by a single mom, Stacy, with several siblings.

“He’s just believed in himself and trusted the process. He’s an overcomer. He’s trusted the people who cared about him, and I think he knows who is real and who’s got his back and who doesn’t.”

Notae arrived at Newton High School from a middle school close to Atlanta and was part of the basketball program for four years. Rasmussen said the guard was named the most valuable player of the freshman team before joining varsity as a sophomore.

Late in that season, Notae’s play moved him into the Rams’ starting lineup. The team proceeded to make what Rasmussen described as something of a Cinderella run in the postseason.

After a fourth-place finish in its region tournament, Newton was handed a road game against defending state champion Tift County, which was 27-1 entering the matchup.

Rasmussen remembers the Rams’ opponent’s game-day environment including a full band and large video board inside the gym. He told his players prior to tipoff that none of those bells and whistles would give Tift County an on-court advantage.

“JD shot 6 for 8 from three and had like 22 points and we totally stunned their whole fan base,” Rasmussen said. “JD went off and that was a huge part of us winning. We won in the second round to get to the Elite Eight. We had to go to a No. 2 seed and we won that game, as well.

“It was really a great little run. JD was the man from then on. Big games, he shows up. That’s his mentality. I think it comes from that fearlessness. You can almost say part of it is he doesn’t even realize how big the moment is. It doesn’t faze him, so he doesn’t care.

“He’s going to go out and do what he does, and he’s not backing down from anybody.”

In 2015-16, the Rams won 27 games, and the following season Newton finished 28-2, according to MaxPreps. Notae, playing alongside future Kentucky guard Ashton Hagans and North Carolina-Greensboro guard Isaiah Miller, averaged 22 points, 5 rebounds and 2.5 assists per game during his senior season.

His knack for scoring in bunches and throwing the first punch in games was crafted at Newton. Notae doing so at Arkansas is nothing new to Rasmussen. He watched the psyche of numerous opponents crumble following a spree from the guard.

“He’d come out in the first quarter and the other team’s coach would totally fear him, because he could hit 4-5 threes in like 3-4 minutes, take over a game and ruin another team,” Rasmussen said. “He’s such a killer. He’d come out, boom, boom, boom, bunch of threes and you’re up 15.

“The other team never recovers.”

The Razorbacks’ game at Georgia on Feb. 2 was a homecoming for Notae, who grew up an hour southwest of Athens. He put on a show in a convincing 99-73 Arkansas win and flirted with a triple-double, finishing with 23 points on 9-of-14 shooting, 9 rebounds, 6 assists and 3 steals.

“I always wanted to go back and play against any team in my home state,” Notae said. “Just going back and playing in front of my family is always just exciting.”

For the first time since Notae’s days at Jacksonville (Fla.) University, Rasmussen was in attendance. And he brought with him his team from North Oconee High School.

He caught up with Notae and his family afterward. It had been too long, Rasmussen said.

“It makes us proud to know him and know all the experiences he’s had,” he said. “For him to put all that hard work in and stay committed this long, it just warms your heart. We’re really proud of him. It has not surprised me, though, because I knew if he stayed committed and continued to get better and stayed humble like he’s always been that he’ll do everything he needs to do to get to the next level and continue to move up.

“We recommended him and tried to tell a lot of Division I coaches that we came in contact with and recruited our kids to be a believer (in him), because we knew his mentality was ripe for success. I think it’s heart warming for us to see him be at this pinnacle of success and play at the highest level in college.”

Notae enters his second NCAA Tournament this week as the face of the Razorbacks. As you might expect, he is simply grateful to be in position to be able rise to meet the moments of March.

He averaged 9.8 points in Arkansas’ four games in Indianapolis last season, including 14-point games against Colgate and eventual national champion Baylor. He fouled out against the Bears in just 15 minutes.

Given his recent foul troubles, he’s eager to change the narrative and make another splash.

“It’s an honor. Just a blessing,” Notae said at the Razorbacks’ selection show watch party Sunday. “Not many teams get to have this type of opportunity. Each and every game is important.”

Rasmussen is appreciative, too, most of all for Musselman giving Notae a second chance and guiding his development the last three years.

“That coaching staff has poured into JD and taken him in to be part of the family, and JD has reciprocated that by working hard and doing everything they’ve asked him to do,” he said. “He hasn’t changed, yet he’s totally developed and grown. His mentality is his biggest attribute. That toughness, not backing down and the commitment part, those are the things that college coaches really want once they’ve already said you’ve passed the eye test on talent.

“They want the mentality to be ripe for success, and he’s got that.”