Youthful Utes unshaken ahead of game with Razorbacks 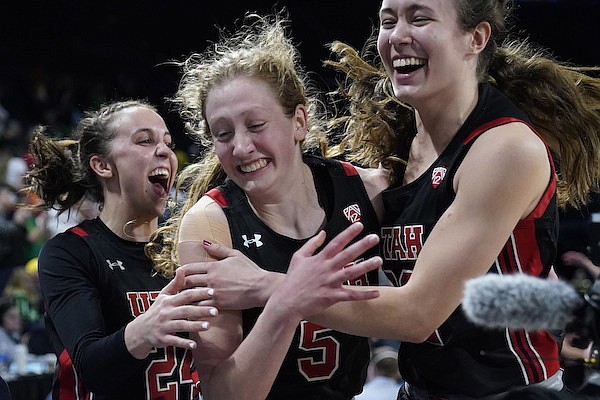 Utah women’s basketball Coach Lynne Roberts couldn’t put her finger on any specific moment or turning point to this season.

Her Utes have two freshmen and two sophomores in the starting lineup, but are back in the NCAA Tournament for the first time since 2011.

Utah (20-11), a No. 7 seed, will take on No. 10 seed Arkansas at 4:30 p.m. on Friday at the Frank Erwin Center in Austin, Texas, as part of the Spokane Region in the opening round of the NCAA Tournament. It will be the Utes’ 18th NCAA Tournament appearance. They are 9-18 all-time in the tournament.

“It’s just been brick by brick,” Roberts said. “We had adversity, but we never stopped building.”

That lack of peaks and valleys might be what makes the young Utes unique.

Utah hasn’t lost more than two games in a row this season and that happened just twice. Three of those four losses came to teams ranked The Associated Press poll. It finished strong, though, making a run to the Pac-12 Tournament final as a 6 seed before falling to top-seeded Stanford.

“They have just shown up the same way every day, just steady, which for a young team is kind of rare,” Roberts said. “There hasn’t been those emotional ups and downs. Sometimes that ignorance can be bliss where they just don’t know any better.

“They’ve totally bought into our program, our style and our philosophy.”

But the change in results has been distinct this season. The Utes have 20 wins after struggling to 5-16 a season ago and finishing under .500 the past two seasons.

Utah employs a high-octane offense with an affinity for the three-point shot, much like Arkansas.

Razorbacks Coach Mike Neighbors said it is an example of the selection committee matching up teams with similar styles.

“Rarely do you look at a stat sheet and see a group that shoots more threes than we do,” Neighbors said. “But they’re one of them. So, exciting matchup.”

Utah is led by 5-11 Gianna Kneepkens, the Pac-12 Freshman of the Year and an All Pac-12 first-team selection. She has played in every game and started 23, while averaging a team-best 12.0 points per game. She came to Utah after putting up some prolific scoring numbers in high school.

Kneepkens led the state of Minnesota, averaging 43.1 points per game during her senior season in high school. She finished with 3,704 points for her career, which ranks four all-time in the state. She also set a state record, scoring 67 points in Duluth Marshall’s 94-91 state quarterfinals loss. She also hit 10 three-pointers, added 5 steals, 5 assists and 2 blocked shots in that game.

Utah will be without 6-4 sophomore Peyton McFarland, who injured her knee in the Utes’ second-round win over Washington State in the Pac-12 Tournament, Roberts said. She mainly played off the bench, averaging 6.7 points and 4.3 rebounds in just under 15 minutes of action.

Roberts said McFarland’s absence will be felt, but also pointed out the Utes found ways to win without her, pulling away to beat Washington State and upsetting Oregon.

“She was probably our best back-to-basket, post-type scorer,” Roberts said. “Certainly, we’d love to have her. We beat Oregon — who is probably the biggest team in the country — without her and played with Stanford for three quarters and just ran out of gas to be honest.”

Utah also has an Arkansas connection. Junior Dasia Young, who transferred to Utah this year after playing two seasons at Tennessee-Martin, is from Jonesboro. She and Razorbacks redshirt freshman Elauna Eaton played one season together at Nettleton High School in Jonesboro.

Roberts said Young has been a nice addition, averaging 7.4 points and 3.2 points while playing in 30 games with 11 starts. She’s averaged more than 22 minutes per game.

“She’s been great,” Roberts said. “Last year, we were missing a little toughness. She plays with a little edge and we needed that.”