'He looked like a pro': Umude the star in first tourney game 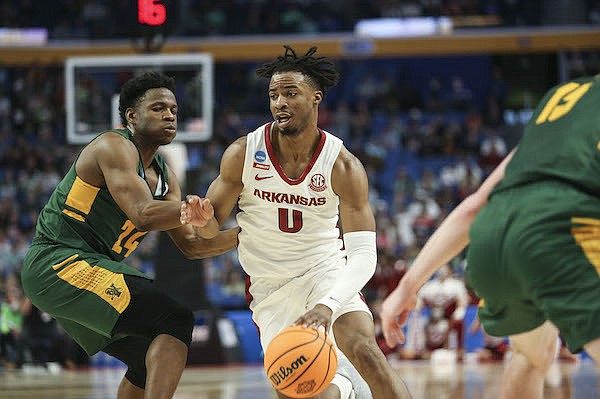 Arkansas' Stanley Umude (0) drives the ball past a Vermont defender during an NCAA Tournament game on Thursday, March 17, 2022, in Buffalo, N.Y.

BUFFALO, N.Y. — Moments after the final buzzer sounded Thursday night, Stanley Umude jogged toward the Razorbacks' player tunnel to join his teammates in the locker room.

With both arms raised and the index finger on each hand pointed toward the rafters of KeyBank Center, he reveled in the moment he helped create.

Arkansas fans stationed in the section behind the team’s bench cheered the South Dakota transfer, and Razorbacks cheerleaders jumped up and down with excitement as he passed them. It was a fitting sendoff for the star of No. 4 seed Arkansas’ 75-71 victory over No. 13 seed Vermont.

“I was really impressed with him,” Vermont coach John Becker said. “Gosh darn, he is huge. Like, on tape, he didn’t look that big. Then he could really shoot it and really provide spacing for them. I thought he was really, really good and impressive.

“He looked like a pro. He is a good player, for sure.”

Umude, playing his first NCAA Tournament game in a long college career, looked nothing like a player brand new to the postseason scene.

The 6-6 wing led all scorers with 21 points on 6-of-11 shooting, including 3 of 4 from three-point range, and finished with a season-high 9 defensive rebounds and 3 assists. The assists were his most since Feb. 2 at Georgia.

For good measure, he blocked two Vermont field goal attempts and did not commit a turnover.

Umude has scored 20-plus points in back-to-back games for the first time this season. He led the Razorbacks with 20 in their SEC Tournament semifinal loss to Texas A&M last Saturday.

“Stan can score on all three levels, so I think we used that to his advantage in our offense, and I think as we continue to run plays for him, he continues to make plays for us and himself,” Arkansas guard Davonte Davis said. “I think if we continue to do that down the stretch like we did tonight then the sky is the limit for Stan.”

During a first half in which Arkansas leading scorer and All-America guard JD Notae missed all four shots from the floor, two free throw attempts and did not score, Umude’s play on the offensive end helped stabilize the Razorbacks and sent them into halftime leading 34-27.

Davis had 10 points at the break, while Umude scored 9 to go with 3 rebounds and 2 assists. Umude later capped a memorable night with a near-flawless second half in which he scored 12 points on 2-of-3 shooting, including 2 of 2 from distance, and 6 of 6 at the free throw line.

Umude has become an X-factor for the Razorbacks this postseason. And it is easy to see how much trust and belief Arkansas coach Eric Musselman has in the two-way standout.

For the first time this season Umude played all 40 minutes in a game. He was likely the last player Musselman wanted to sit on his bench.

“It was interesting before the game, he was kind of non-emotional, you know, laser-focused,” Musselman said of Umude. “We got here early because the tip time kind of kept getting moved back, and we just have one locker room, so I would kind of pop in from the hallway and a couple of guys had their phones just because we don’t collect the phones until 90 minutes before tipoff.

“He wasn’t one that had the phone. He was staring right at the video screen as we had Vermont film rolling.”

A more-than-capable three-point shooter in his final three seasons at South Dakota, Umude is heating up behind the three-point line at an ideal time for Arkansas. He has knocked down 3 three-pointers in 5 of the team’s last 6 games.

PHOTO GALLERY: Our top shots from the NCAA Tournament

“I feel good shooting the ball,” Umude said. “(I have) a lot of confidence in my teammates, and coaches do a good job of finding me. I think I just have been getting a lot of reps in and just picking my spots.”