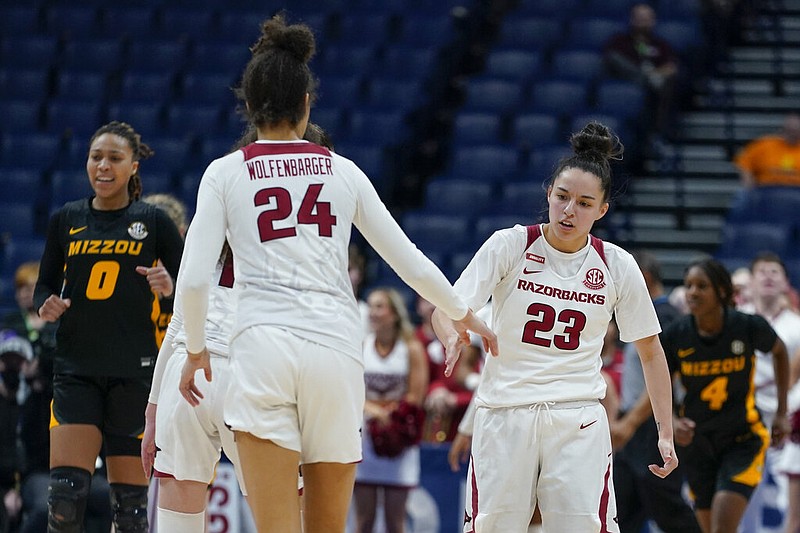 Arkansas' Amber Ramirez (23) celebrates with Jersey Wolfenbarger (24) after scoring against Missouri in the second half of an NCAA college basketball game at the women's Southeastern Conference tournament in Nashville, Tenn., on Thursday, March 3, 2022. Arkansas won in overtime 61-52. (AP/Mark Humphrey)

AUSTIN, Texas — Both University of Arkansas women’s basketball Coach Mike Neighbors and Utah Coach Lynne Roberts agree the matchup between their teams in today’s NCAA Tournament opener should be something the fans will enjoy.

The No. 10 seed Razorbacks take on the Utes, the No. 7 seed, at 4:30 p.m. today in the Frank Erwin Center as part of the Spokane Region in Austin, Texas.

More from WholeHogSports: How to watch, listen to Arkansas-Utah

“I love the fact that the NCAA put us against Utah as far as matchups-wise,” Neighbors said. “I hate it that it’s Lynne, but I love that we got two styles of play. It’s not going to be this contrasting deal.”

“It’s a little like looking in the mirror,” Roberts added. “It’s kind of crazy isn’t it? It should be a track meet.”

Arkansas is making its second straight tournament appearance after losing in the opening round a year ago to No. 13 seed Wright State, also in the Erwin Center. So the Razorbacks are looking for a little redemption, especially with San Antonio-native Amber Ramirez getting the chance to sort of return home.

She’s excited to have plenty of friends and family in the stands today in Austin, after crowds were limited a year ago because of the pandemic.

“How we ended last year is not how we wanted to end,” said Ramirez, who leads the team averaging 15.1 points per game. “Getting another chance to come back, getting to play in front of friends and family is great.”

Arkansas brings a different team to the tournament this time after losing seven seniors. The Razorbacks have five freshmen and Ramirez is the lone senior.

But Neighbors said that youth could be a positive.

“I like them having that blissful naivete, however you want to put it,” Neighbors said. “I like that we have a lot of bright-eyed freshmen, first-year freshmen, that don’t know, are here to experience it for the first time. I want them to tell some things but not all the stuff.”

Youth is something Arkansas and Utah have in common. Freshmen made 50 starts this year for the Razorbacks, led by SEC Freshman of the Samara Spencer.

Freshman Gianna Kneepkens was named the Pac-12 Freshman of the Year. She and Jenna Johnson combined for 52 starts for the Utes and are the team’s top two scorers.

Arkansas and Utah 2 of just 6 teams in the Power 5 that had freshmen with 50 or more starts.

Neighbors said there’s a chance Spencer and Kneepkens could end up guarding each other some. Both have obviously flourished against top competition.

“Sam came in when the opportunity presented itself to get a lot of playing time, then played very, very well against the best players in our conference, some of those being five- and six-year seniors,” Neighbors said. “I know Gianna did the same thing for Utah. When you watch it, you can tell they’re not freshmen anymore. Once they get past that 300-minute mark, they’re no longer freshmen.”

The Arkansas-Utah winner will face the Texas-Fairfield survivor on Sunday. The Longhorns are the No. 2 seed and are coming off winning the Big 12 Tournament title last weekend. They are coached by former Arkansas assistant Vic Schaefer.

Neighbors said there’s no question this year has a different feel and it has been good. But he also admitted to some strong emotions when thinking about the team in 2020 that had its NCAA Tournament experience ripped away by the pandemic.

“Last year you just felt like, I don’t know, hall monitor,” Neighbors said. “‘Don’t go there, don’t do that, get back in there.’ We literally were hall monitors standing out there.