One and done again: Utah eliminates Arkansas in NCAA's first round 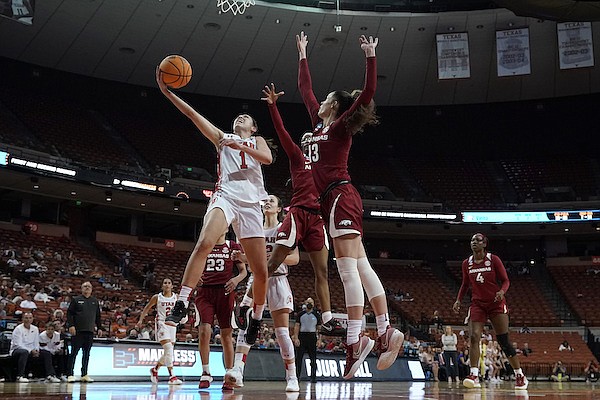 Utah guard Isabel Palmer (1) drives to the basket against Arkansas guard Makayla Daniels (43) during the first half of a college basketball game in the first round of the NCAA women's tournament, Friday, March 18, 2022, in Austin, Texas. (AP Photo/Eric Gay)

AUSTIN, Texas — The University of Arkansas women’s basketball team didn’t have any better luck with a second chance in the Frank Erwin Center.

The No. 10 seeded Razorbacks fell behind 10-0 a little more than two minutes into their NCAA Tournament game Friday afternoon and got no closer, falling 92-69 to No. 7 seed Utah on Friday afternoon. Arkansas was a No. 4 seed a year ago but fell 66-62 at the hands of No. 13 seed Wright State in the opening round in Austin.

The Utes shot 52% from the floor, made 15 three-pointers and held off a couple of second-half charges before putting together an 18-0 fourth-quarter run for the knockout punch.

“I thought we ran into a really, really good team that played really, really well,” said Neighbors, whose Razorbacks also lost in the first round in Austin a year ago. “I think their defense got us taking some shots that were tough. They were physical with us and when we didn’t respond offensively, I think it affected us defensively early.

Sophomore Kennady McQueen led four Utes in double figures and keyed their three-point attack. She finished with a team-high 20 points, including 6-of-9 three-pointers. She had plenty of help as Gianna Kneepkens, the Pac-12 Freshman of the Year, added 16 points. Freshman Jenna Johnson pitched in 12 and Kelsey Rees registered a double-double with 11 points and 10 rebounds.

Utah (21-11) led 20-12 after a quarter and pushed that to 44-27 at halftime. Arkansas got some momentum early in the second half to pull within 10 points, but the Utes never wavered despite having several freshmen playing key roles.

Utah Coach Lynne Roberts has previously said that the Utes have played steady all season and that happened again Friday in Utah’s first NCAA Tournament game since 2011.

“We have bought into the concept of staying neutral this year,” Roberts said. “Don’t get too high. Don’t get too low. But before the game, shoot-around today, practice last night — it didn’t feel any different.”

Despite committing 19 turnovers, Utah dished out 20 assists on 32 made field goals. Senior Dru Gylten finished with a game-high 11 assists for the Utes.

Guard Amber Ramirez, the lone senior on the Arkansas roster, scored a game-high 24 points but struggled to get going early and was just 2 of 12 from three-point range. Samara Spencer and Makayla Daniels added 18 each for the Razorbacks (18-14). Erynn Barnum grabbed a game-high 12 rebounds off the bench.

Daniels said the Razorbacks allowed Utah to get going early and it was difficult to recover.

“I think they were really physical on our drives to the basket,” Neighbors said. “We weren’t able to get to 2 feet and take shots that we’ve normally had. I thought they had a great defensive game plan. Their length bothered us. Those 5-11 guards, it adds up. Reese did a good job, as well, protecting the basket.”