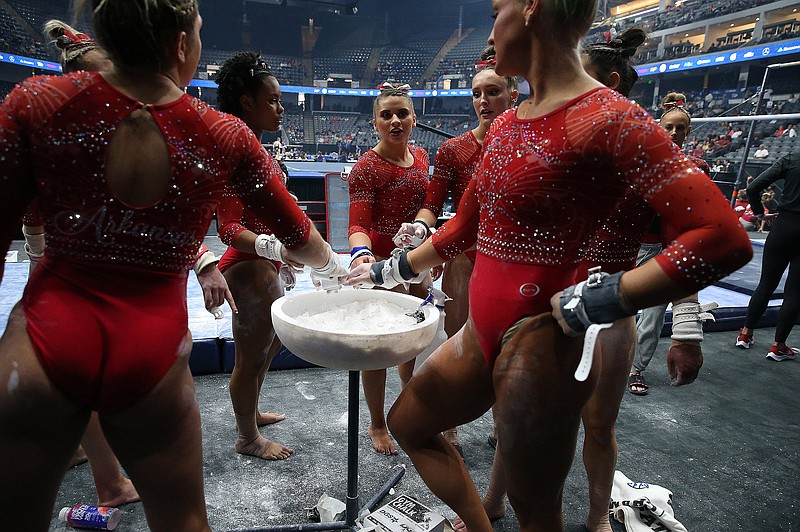 Arkansas gymnasts are shown at the SEC Championships on Saturday, March 19, 2022, in Birmingham, Ala. (SEC Pool Photo)

The University of Arkansas gymnastics team continued its late-season surge with a second-place finish in the afternoon session at the SEC Championships on Saturday in Birmingham, Ala.

The No. 17 Razorbacks led at the halfway point before having to count too many deductions on the balance beam in the fourth rotation to post a 196.45 on the raised podium at Legacy Arena.

No. 11 Missouri captured the afternoon session with a 196.875, the Tigers’ best finish at the SECs since joining the conference for the 2012 season.

The top half of the SEC — Florida, LSU, Auburn and Alabama — competed in the night session.

Arkansas did not have to count anything lower than 9.8 through the first three rotations, but also did not post a 9.9 in the tougher postseason scoring.

The Razorbacks put a pair of seniors on the event podiums, with Sarah Shaffer’s 9.875 tying for second on the vault with Kentucky’s Arianna Patterson, and Amanda Elswick’s 9.875 good for third on the balance beam.

Shaffer also scored 9.875 on the floor exercise to tie freshman Maddie Jones for the team high and place seventh overall.

The Razorbacks held the lead after the first rotation with a 49.225 on the floor exercise. Senior Bailey Lovett had a 9.85 in the anchor spot, junior Madison Hickey posted a 9.825 and senior Kennedy Hambrick a 9.8.