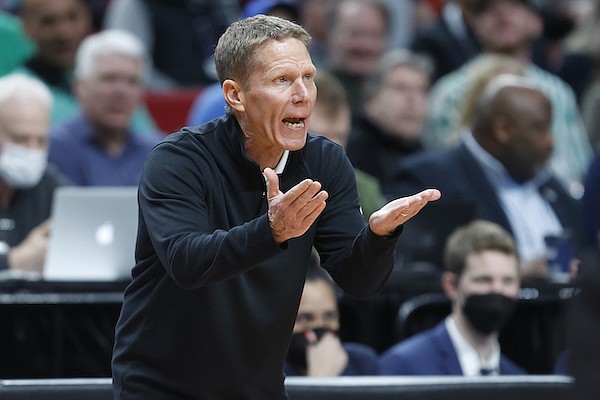 Gonzaga head coach Mark Few reacts near the bench during the second half of a first round NCAA college basketball tournament game against Georgia State, Thursday, March 17, 2022, in Portland, Ore. (AP Photo/Craig Mitchelldyer)

Few’s top-seeded Bulldogs will face fourth-seeded Arkansas on Thursday at Chase Center in San Francisco in the semifinals of the NCAA West Region. The winner will play second-seeded Duke or third-seeded Texas Tech on Saturday for a chance to advance to the Final Four.

“They’re very athletic, evenly sized and can really guard,” Few said of the Razorbacks. “They posted some phenomenal defensive numbers.

“Their defense is kind of what jumps out at you, right off the page. They’ve got good balance. And then watching them, they seem to have a lot of freedom, so even guys that might not statistically look like they’re shooting the ball very well, they jump right up and shoot them anyway and with confidence.”

Few indicated that he expects physical games in all three games that are played in San Francisco. The West Region is the only region where all four of the top-seeded teams advanced past the opening weekend.

Arkansas (27-8) is the only team in San Francisco that Gonzaga (28-3) has not played this season. The Razorbacks and Bulldogs have not played since the 2013 Maui Invitational.

“Sneakily, our little region here has got some phenomenal defensive teams left,” Few said. “Even if you watch Duke yesterday (in a second-round game against Michigan State), they really defended well, especially down the stretch. Texas Tech, we’ve already seen them this year, but their defense has gotten better and better and it’s No. 1 in the country now.”

Few said he thinks Arkansas is playing well. He singled out the play of guard JD Notae and forward Jaylin Williams.

“They made a great run after the first month or so of the season and figured things out,” Few said. “Notae is kind of the engine that drives them and he has a lot of freedom and can hurt you in a lot of different ways. They have a good inside kid in Williams.”

Gonzaga advanced past the first weekend of the NCAA Tournament with victories of 93-72 over 16th-seeded Georgia State and 82-78 over ninth-seeded Memphis in Portland, Ore. He indicated both of the Zags' opponents were seeded too low.

Few said the Bulldogs were able to physically wear down Georgia State in a game that was tied 54-54 with just more than 12 minutes remaining. He said the game against Memphis was tough physically.

Gonzaga trailed Memphis 43-31 early in the second half, but rallied behind 21 second-half points from Drew Timme, a 6-10 All-America forward.

Timme scored 14 of the Bulldogs’ first 16 points after halftime to help close the gap and made shots to give Gonzaga its first two leads in the second half.

“One of the more memorable stretches in Gonzaga basketball history, if you think about it — in trouble, not fatal trouble, but definitely in trouble,” Few said. “It was just a heroic response by a great player and then everybody feeding off it.

“We needed every ounce of it and every moment of it to get to the point we could finally break ahead.”

Few said his team is expecting every team’s best shot as the No. 1 overall seed in the tournament. The Bulldogs, who lost to Baylor in the national championship game last season, have advanced to the Sweet 16 in every tournament since 2015.

“Everybody just thinks when they pick you No. 1 or whatever that it just magically happens, and it doesn’t,” Few said. “At some point, especially in this tournament, players just have to make plays. They just have to step up and make plays and make shots, and some instances make jump shots because the game gets really physical and it’s hard to get things around the basket.”

PODCAST: Arkansas is SEC's last team standing, back in Sweet 16

Gonzaga will be playing in San Francisco for the second time this season, but for the first time at Chase Center, which is home to the NBA’s Golden State Warriors. The Bulldogs play each season at the University of San Francisco and won this year’s game 89-73 on Feb. 24.

Approximately 875 miles from San Francisco, Gonzaga’s campus in Spokane, Wash., is easily the closest for the four teams that will play at Chase Center this week. Gonzaga athletics director Chris Standiford is hoping for a large number of Bulldogs fans in San Francisco, but said Gonzaga still has tickets available for purchase.

“There’s certainly advantages to being the 1 seed and I think having fans having access to your games is a huge part of it.”