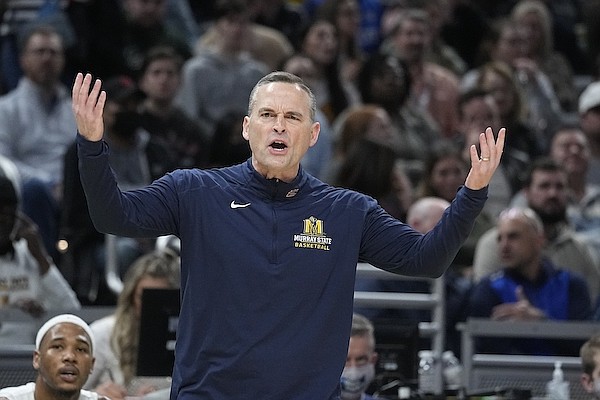 Murray State head coach Matt McMahon argues a call during the first half of a college basketball game against Saint Peter's in the second round of the NCAA tournament, Saturday, March 19, 2022, in Indianapolis. (AP Photo/Darron Cummings)

The person spoke to the AP on condition of anonymity because the hiring, first reported by ESPN, has not been announced.

The hiring comes two days after Murray State's season ended with a loss to Saint Peter's in the second round of the NCAA Tournament.

McMahon, 43, has coached Murray State for seven seasons, during which the Ohio Valley Conference school located in Murray, Kentucky, has had two first-round victories in the NCAA Tournament.

This season, Murray State went 31-3 and the won its fourth regular-season conference title in five years. It was a No. 7 seed in the East Region in this year's NCAA Tournament and defeated 10th-seeded San Francisco in overtime in the first round.

McMahon has a 154-67 record at Murray State, which included appearances in three of the past four NCAA Tournaments, in 2018, 2019 and 2022. There was no NCAA Tournament in 2020 because of the coronavirus pandemic.

The Racers also won a first-round game in 2019.

McMahon replaces Will Wade, who was fired March 12 for cause amid allegations of serious recruiting violations. LSU received a bid to the NCAA Tournament this year but lost in the first round to Iowa State, 59-54.

The circumstances surrounding Wade's firing could mean sanctions for LSU as McMahon arrives. But McMahon's decision also brings him to a Southeastern Conference program with a proud history.