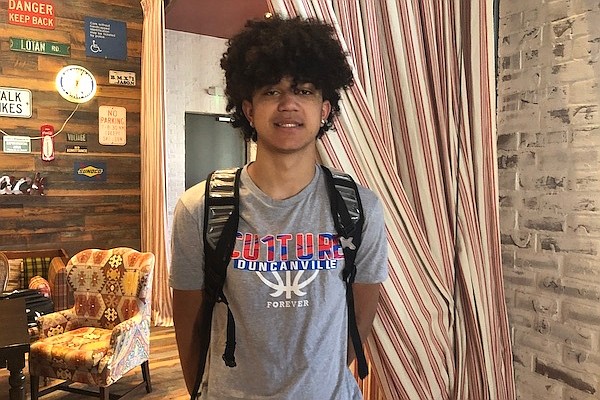 The Arkansas basketball program will find out sometime Monday if it will land a third 5-star McDonald’s All-American and a sixth top-100 prospect for its 2022 recruiting class.

Duncanville, Texas, guard Anthony Black (6-7, 198 pounds) announced Tuesday via a Twitter video that he will commit a day before playing in the prestigious McDonald's event in Chicago.

Black is the highest-rated prospect in the game that is not committed to a school and will make his choice between Arkansas, Gonzaga, TCU, Oklahoma State and the G-league.

All 24 of the McDonald’s game participants have virtual eight-minute interview times with media members Monday. Black’s is set for 4 p.m.

“That is the commit date,” Duncanville coach Dean Peavy texted Tuesday. “I’m not sure exactly how they are doing it.”

The McDonald’s game Tuesday will be played at 8:30 p.m. and will be televised by ESPN.

Both Smith and Walsh have done their part in recruiting Black.

“Me and Jordan have talked to him during his recruitment process,” Smith said in an earlier interview. “We haven’t wanted to pressure him, but we have just told him, ‘Hey, man, if you come here, we are going to win a lot of games.'

“We didn’t lie to him. We told him what is going on, telling him about the situation. Me and AB were brothers before all this stuff and us being recruited by Arkansas. He was asking me a lot of questions and I just kept it real with him.

“Whatever decision he makes, we are still going to be brothers and I am sure that is the same thing with him and Jordan. I am sure AB will make the best decision for him, but if he does come here, we are all going to get to work right away.”

Walsh and Black are both Texas natives.

“I am working on him,” Walsh said. “He is my guy and from Texas like me. I am trying to get him here with me. I am just telling him all the true things about it, how life is at Arkansas from what I know.

“I have told him that Coach (Eric) Musselman is a winner and is going to make you work hard.”

Despite missing parts of the season due to eligibility issues raised by the Texas University Interscholastic League, Black helped lead his team to a Class 6A state championship while scoring 17 points and being named the MVP.