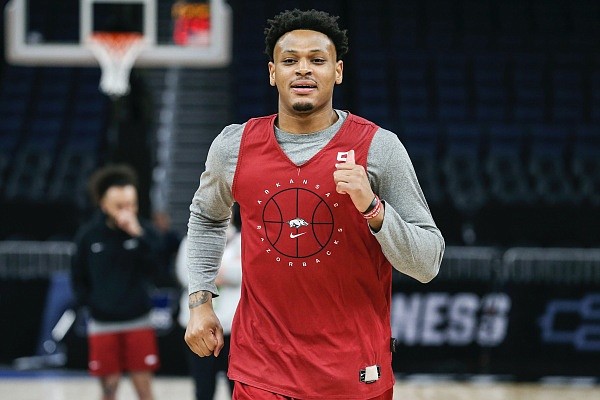 Arkansas guard Au’Diese Toney (5) warms up, Wednesday, March 23, 2022 during a practice before the Sweet 16 round of the 2022 NCAA Division 1 Men's Basketball Championship at Chase Center in San Francisco, Calif. Check out nwaonline.com/220324Daily/ and nwadg.com/photos for a photo gallery.

With a quick scroll through her account it becomes crystal clear she is as proud as the day is long of her son, Arkansas wing Au’Diese Toney. It is also easy to see that she wants him to receive attention and notoriety he deserves.

On Monday, two days after Toney put together arguably his most impressive defensive performance of the season in limiting New Mexico State star Teddy Allen to 12 points on 16 field goal attempts in the team’s second-round meeting, he continued to be overlooked. Toney-Teague said as much.

In a 1-minute, 53-second video, famed college basketball broadcaster Dick Vitale released his “All-Defensive Dynamo Team" for the Sweet 16. Toney’s name was nowhere to be found on the dry-erase board to Vitale’s right.

Two days before he played Arkansas, Allen scored 37 points in an upset win of No. 5 seed Connecticut.

She quickly took a screenshot of the tweet and texted the picture to her son. It wasn’t the first time she had done something similar, and it likely won’t be the last before the Razorbacks and No. 1 overall seed Gonzaga tip off on Thursday at 6 p.m. Central at Chase Center.

Toney-Teague understands Toney has his own internal motivations that key him up prior to games. But she enjoys throwing fuel onto the fire and contributing in her own unique way.

“(Before the game against the Aggies), I said, ‘I know like heck you’re not going to have me coming all the way to New York and you’re going to let this kid drop 37 on you, are you?’” Toney-Teague said Tuesday. “He’s just like, ‘Nah, mom. He’s not getting no 37 points tonight.’ And then I’m like, ‘Well, that’s not what these people are saying.’

“He told me to just stay tuned. When he tells me stuff like that, then I know he’s locked in.”

Allen finished 3 of 10 on two-point field goal attempts and did not record an assist for only the second time in New Mexico State’s last 11 games. According to KenPom data, Toney held Allen to an offensive rating of 62, his second-lowest figure in a game in 2021-22.

"I just have that mindset coming into every game (that) you have to give it your all no matter what," Toney said Wednesday. "Any possession can cost the game. I try to lock in as many possessions as I can to get the W."

To Arkansas coach Eric Musselman’s credit, he made a concerted effort to recognize his star perimeter defender for a job well done after the 53-48 victory.

Musselman brought into the team’s locker room the large bracket consisting of teams playing in Buffalo, N.Y., and had the wing do the honors of advancing the Arkansas plaque into the Sweet 16.

"He’s done so much non-box-score-related things by causing a guy to take higher-degree-of-difficulty shots or being a great basket cutter. I did it because of that.”

Toney-Teague said the gesture meant a lot to her son, who routinely draws tough matchups defensively. He often sacrifices his offense, too, as a result of the energy expended on the other end.

She was a fan of the smile he wore as all eyes in a joyous room were finally on him.

“He kind of tends to not smile on the court because he wants to look serious and tough. But he’s really not tough,” joked Toney-Teague, who is making the flight from North Carolina to San Francisco.

Watching Toney play on a national stage with the Razorbacks, she sometimes finds herself thinking about the moment when she realized he had the potential to make a name for himself in basketball. He was 12 years old.

More from WholeHogSports: Video of Arkansas' practice and shootaround on Wednesday

She admits to being his biggest critic, but her eyes opened during this time to the possibility of him having a career in the game.

Then on an AAU team participating in a national tournament in Orlando, Fla., Toney shut down a star player from Puerto Rico, she said. Then Toney scored 30 points in the tournament championship game.

“I looked at my husband and was like, ‘Oh, he’s for real with this,’” Toney-Teague recalled. “We kind of figured that he would be OK, but (before then) we didn’t know that he was actually going to be pretty good and eventually get a D-I scholarship.”

When the family uprooted in Alabama and moved to North Carolina, Toney's game — thanks to newly available resources and training opportunities — went to another level. But it was challenging and scary in multiple ways, moving to a new city and state without loved ones or employment.

Good-hearted faith was placed in those who committed to help pave a way for Toney to reach his dreams.

They also left behind Toney-Teague’s mother, who was sick and over the years developed a special connection with Toney. He has a tattoo of her face on his leg. His grandmother’s advice at the time: Do what you have to do to better yourself.

“We just went on a hope and prayer,” Toney-Teague said. “You just hope they don’t screw you over. It was good. We got here, we got jobs and we’ve made the best of it.”

Toney followed through, too, landing at Pittsburgh following two seasons at Trinity Christian in Fayetteville, N.C. He won a state championship in 2018. Toney was also named a National Athletic Association of Private Schools Division 4 All-American and earned all-state honors.

After three seasons with the Panthers, Toney was one of the prizes of Musselman’s haul from the NCAA transfer portal last spring. At Arkansas, he is playing for a head coach who Toney-Teague says is much like herself – tough.

Toney placing his trust in the Razorbacks’ staff is the best thing he could have done, his mother said.

“That only makes him want to run through a brick wall,” she added. “He can accept that tough coaching. You give him the opportunity, he’s going to do what he needs to do. He’s a team-first kid. He’s always been that. He’s like, ‘I’ll step back. You take all the shine. If the team is not winning then it doesn’t matter what I do as an individual.’

“We’re excited. We’re happy to be in Arkansas, and we’re happy the fans and community have accepted us. I’m just excited that they accepted my son. That in itself just makes my heart happy.”

As one would imagine, Toney-Teague, her husband, Abdul, and her daughter will have butterflies when game time nears. They all want to see Toney thrive and do so as the team succeeds.

Toney-Teague said Toney can always do better, but he has held his own through his first two NCAA Tournament games. She was also sure to remind him that one game — good or bad — does not define a player, and to remain present.

This week, last week does not matter.

“The ultimate goal is to win a national championship,” she said. “I’ll praise him once they win. As of right now, I can’t give him any praise, because he’s doing what he’s supposed to.

“But we’re going to shock the world.”