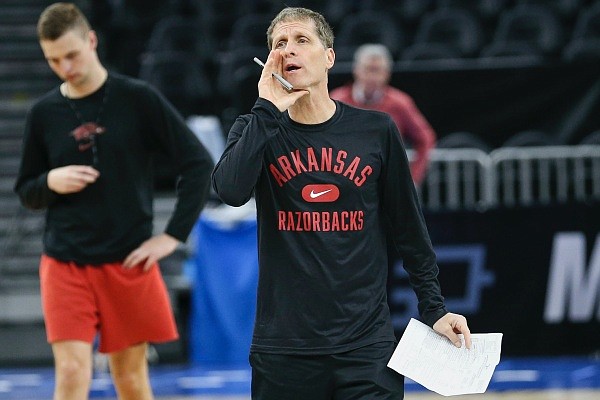 Then he did it again. And again.

His commanding voice cut through pockets of silence and breaks in the team’s up-and-down situation work, and Musselman made certain those in practice uniform understood the importance of transition defense. A handful of drills simulated the Bulldogs’ offense when on the run and the best measures to take defending it.

Musselman is hopeful practice — and great attention to detail — makes perfect Thursday when the teams meet at 6 p.m. Central for a spot in the Elite Eight.

“It better be great or we have no chance,” he said of Arkansas’ transition defense. “The pace that they play at is incredible. Their wings run hard, they have a rim-runner, they have a great trail guy, so all those factors become important.

The physicality the Razorbacks bring in that aspect of the game will be critical in their effectiveness or lack thereof. In two games in Buffalo, N.Y., last week, Arkansas was sound, but Gonzaga presents greater problems in terms of speed and athleticism.

The Razorbacks allowed an average of two transition points against Vermont and New Mexico State, seven points below their season per-game average. The Catamounts and Aggies, however, ranked 292nd and 238th nationally in tempo, respectively, according to KenPom data.

The Bulldogs rank sixth in the country in average possessions per game (72.5) and second in average length of offensive possession (14.6 seconds), according to the site. And they boast the No. 1 offensive efficiency rating (122.1).

“Communication becomes really important for any team that runs and any team that plays with great pace," Musselman said. "Pointing and picking and finding your man, it becomes of the utmost importance.

“There's always going to be cross-matches whenever you play a team that runs like they do, which puts a further importance on the defensive communication.”

During one drill at Arkansas’ workout, Musselman made sure each of his players felt his urgency. One player in the team’s rotation was singled out for reacting a step slow to a scout team player acting as one of Gonzaga’s top perimeter threats.

The Bulldogs shoot at a 37.4% rate from three-point range on a healthy 22.2 attempts per game. They also average 15.1 fast-break points per game, according to CBB Analytics, which place them in the 98th percentile nationally.

Gonzaga, for the season, is shooting 85.7% from the floor in transition. Rasir Bolton, a 6-3 guard, leads the team with 3.2 fast-break points per game, per CBB Analytics, and 6-7 guard Julian Strawther averages 2.6 per game.

More from WholeHogSports: Video of Arkansas' shootaround and practice on Wednesday at Chase Center

“I feel like we have to get back in transition.”

On the other side of the coin, the Bulldogs believe that slowing Arkansas’ roll in the open floor is a top priority. The Razorbacks are averaging 12.9 points per game in transition and shooting 89.9% in those instances, according to CBB Analytics.

Notae scores a team-high 3.1 fast-break points on two attempts per game. Au’Diese Toney, a 6-6 transfer from Pittsburgh, is second at 2.3 points per game.

“Man, (he’s) a handful,” Gonzaga coach Mark Few said of Notae. “Watched a bunch of him, or more clips (Tuesday), just how adept he is at just little tiny slots to be able to get in the lane, and so good in transition. Plays with a lot of freedom. It's hard.

“I mean, he can pull the three on you or he can fake and drive and get a crease and get downhill.”

Nembhard, averaging 12 points on 38.5% from three-point range and 1.5 steals, recognizes that the Razorbacks are capable of causing problems in transition. A former Florida guard, he had a career-high 6 steals during a 90-57 victory over BYU on Feb. 5.

Defensively, the Bulldogs are allowing an average of 7.2 points per game in the open floor.

“I think their team likes to push the pace, just like us,” Nembhard said. “I think it will be a good game for us to get up and down the floor. They have a lot of athletes.”