Musselman making sure to have more fun these days 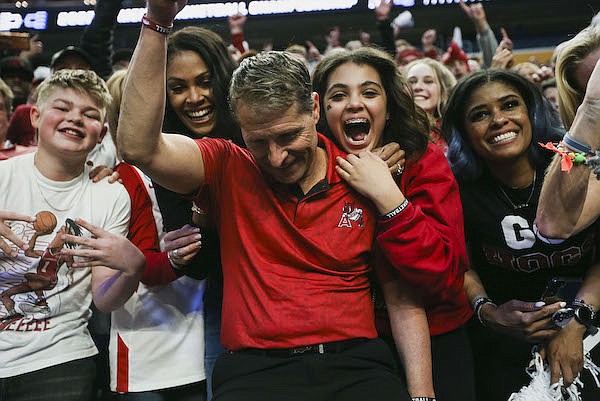 Arkansas coach Eric Musselman (center) celebrates with his family after the Razorbacks' 53-48 victory over New Mexico State at the NCAA Tournament on Saturday, March 19, 2022, in Buffalo, N.Y.

SAN FRANCISCO — It should have been the best of times for Eric Musselman when he transformed Nevada into a national college basketball power.

In Musselman’s third season as the Wolf Pack’s coach in 2017-18, he led Nevada to a second consecutive NCAA Tournament appearance and a spot in the Sweet 16 with victories over Texas and Cincinnati before a 69-68 loss to Loyola Chicago.

With most key players back — notably twins Caleb and Cody Martin — the Wolf Pack opened the 2018-19 season ranked No. 10 in The Associated Press poll.

“We put so much pressure on ourselves being a top 10-ranked team that we never enjoyed the wins enough,” Musselman, now in his third season as the University of Arkansas coach, said recently on his radio show. “We would win by 10, and it felt like the end of the world.

“I would be frustrated.”

More from WholeHogSports: Notae looking for consistency in San Fran

Nevada finished 29-5 that season but didn’t make it back to the Sweet 16. The Wolf Pack lost to Florida 71-60 in a first-round NCAA Tournament game in Musselman’s final game before taking the Arkansas job.

Musselman said what happened to him at Nevada and not enjoying the victories enough turned out to be a great learning experience. He made sure not to repeat the same mistake when he revived Arkansas’ program, even when the team struggled at times this season.

The Razorbacks opened this season ranked No. 16 in The Associated Press poll after last year advancing to their first NCAA Tournament Elite Eight appearance since 1995. They rose as high as No. 10 after a 9-0 start, but fell out of the poll during a 1-5 stretch that included an 0-3 start in SEC play.

Musselman made some changes to go with a bigger and more physical starting lineup, the defense tightened up, players accepted their roles and now Arkansas (27-8) is back in the Sweet 16, where the Razorbacks play No. 1 Gonzaga (28-3) on Thursday night in the West Region semifinals in Chase Center.

“I just want to keep getting better,” Musselman said after Arkansas beat Kentucky 75-73 in Walton Arena. “I want our players to understand we have a lot of areas we can keep improving on.

“But I’ve never been happier and prouder. It’s a fun group. We’re having a blast.

“We’re grinding in practice, but we’re having fun, too. You want your student-athletes to have an experience of a lifetime.”

Arkansas is 17-3 in its last 20 games, including a 9-0 home record that saw Musselman celebrate each victory by going into the student section despite wearing a sling after undergoing left shoulder surgery.

“He brings his energy, so we just try to feed off him.”

More from WholeHogSports: 1 seeds have had Arkansas' number in tournament

“Coach Muss does a good job making sure we’re having fun during practice,” Williams said. “He tries to make sure that we’re locked in, but we’re also having fun doing it.

“It keeps the process good, keeps us interested in the whole thing.”

The coaching staff has put together a charge wall with photos displayed at the Razorbacks’ practice facility of players drawing fouls — dominated by Williams and his 50 charges — and also has created awards to be handed out after victories.

“All these glue things or intangible stats, we try to celebrate every game,” Musselman said. “We have a lockdown defender chain that we give out the day after the game or the night of a game where a player puts a chain around his neck.

“It’s got a big ol’ lock for the lockdown defender.”

Senior guard Au’Diese Toney has been receiving the lockdown defender chain quite a lot.

Some of the other awards?

“Players’ initials get put on the football helmet for making tough plays,” Musselman said. “We have a bottle of Windex for the guy who cleans the glass and has a lot of rebounds.

“So we have all these different things that we try to celebrate after wins.”

Sophomore guard Davonte Davis, a key returnee from last season and now on a team with seven newcomers, said the Razorbacks have done a good job becoming closer as people, not just teammates.

“Especially off the court,” said Davis, who has gone from being a starter to Arkansas’ sixth man. “I think that’s what’s really helping us no matter if we’re at dinner, shoot-around, in the locker room or back at home.

“We’re always bonding and talking to each other. That’s something that every team needs, and I think we’re doing a pretty good job, knowing that it’s helping us on the court.”

Musselman said his wife, Danyelle, reminds him about what happened in his last season at Nevada, as well as others on his Arkansas staff who were with him in Reno such as assistant coach Gus Argenal; director of operations Anthony Ruta; Michael Musselman, his son and director of recruiting; and director of scouting and analytics Hays Myers.

“We had never been in that position before, and so you would think it would have been your most fun year,” Danyelle Musselman said of Nevada opening the season as a top 10 team. “Going into it, we thought it would be so much fun.

“But it really was just so much pressure. Every night you have a target on your back. Every night when a loss comes, it’s just so huge. The other team rushes the court if they beat you.

“It was probably the least fun year of the four years we had at Nevada. It was a team that had trouble down the stretch. We lost to Florida, and then the season was over. It was just kind of anticlimactic. You had this great year, but it ends with you feeling disappointed.”

Notae said how the Razorbacks’ chemistry developed after a 10-5 start has been the most enjoyable aspect of the team.

More from WholeHogSports: Razorbacks' defense stands out to Mark Few

“Just all the togetherness,” Notae said. “Not giving up. Sticking with each other through the rough times and keeping on each and every day to get better.

“Everybody saying, ‘All right. It’s on us now. We just can’t go out and play, go out there like we have no business.’ I felt once we got there, we all came together.”

Guard Stanley Umude, a fifth-year graduate transfer from South Dakota, is among the Razorbacks’ impact newcomers. He’s playing in the NCAA Tournament for the first time.

“You try not to take it for granted, because there’s a lot of people that would love to be in this position,” Umude said. “So you just try to live in the moment.

“We’re having a lot of fun and hopefully we can keep winning and keep taking it as far as we can.”

The Razorbacks also rallied from a 2-4 start in SEC play last season and finished 25-7 overall.

“If you look at our team last year and our team the year, they both had their struggles early on in conference, then started playing great basketball and completely turned things around,” Danyelle Musselman said. “I don’t think it’s an accident.”

“Eric is a person that never thinks he knows it all, and he’s not just open to learning, he actively seeks learning new things,” she said. “He actively goes out and tries to learn things, honestly, on a daily basis with all of his reading and his talking to other coaches. Talking to coaches from different sports. He’s just a person that constantly wants to gather information.”

“We talked philosophy for quite some time,” Musselman said. “I thought maybe we’d talk for three or four minutes, but we really got into some leadership stuff, which was really, really cool.”

Musselman said he exchanged phone numbers with McDermott and Beane, and they texted each other after their visit.

“I truly believe that sometime down the road, we will end up either doing a Zoom together with maybe some other coaches, or maybe just the two of us talking philosophy,” Musselman said of he and McDermott. “We talked about dealing with media after a win or after a loss. We talked about a whole bunch of things.

“[McDermott] probably didn’t learn anything from me, but I learned some stuff from him for sure.”

Regarding his own team, Musselman said the Razorbacks have more camaraderie now than they did earlier in the season.

“Film sessions have not just been focused, they’ve also had some humor to them,” he said. “Guys are making fun of stuff I say.

“We want our student-athletes to really embrace the challenge going into every game, accept the preparation. But you’ve also got to really, really enjoy the process.”

Musselman, a former NBA head coach with Golden State and Sacramento, said he admires the approach of Steve Kerr, Golden State’s current coach who has led the Warriors to three championships.

“I’ve really loved reading about Steve Kerr and what he’s done with the Golden State Warriors throughout their championship runs, and how he wants his teams to enjoy coming to practice,” Musselman said. “We’ve tried to embrace that philosophy as well.”

Now Musselman and his Razorbacks will play Thursday night on the Warriors’ home court in the Chase Center.

It’s a ride Musselman has made sure to enjoy this season.