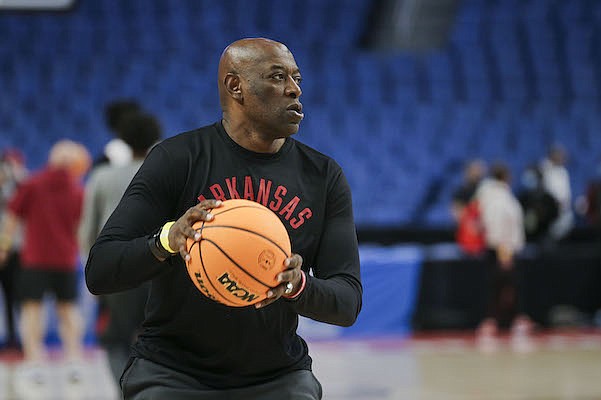 SAN FRANCISCO — Thirty-five years after Keith Smart first experienced the NCAA Tournament as a player for Indiana, he’s getting to experience it as a coach for the first time with the University of Arkansas.

Smart, who has 22 seasons of coaching in the professional ranks — including as an NBA head coach for the Cleveland Cavaliers, Golden State Warriors and Sacramento Kings — is in his first season as a college coach with the Razorbacks.

“It’s two different environments,” Smart said Wednesday of being a player and coach in the NCAA Tournament. “Obviously as a coach you’re helping put things together for the team and working with the players to try to help them become better.

“When you’re playing, you’re trying to hit a shot, make a pass, get a rebound.”

Smart, a 6-1 guard, hit one of the biggest shots in NCAA Tournament history when he sank an 18-foot baseline jumper with four seconds left to lift Indiana to a 74-73 victory over Syracuse in the 1987 national championship game in the Louisiana Superdome in New Orleans.

More from WholeHogSports: Notae looking for consistency in San Fran

Fans still approach Smart wanting to talk about the shot.

Smart said when the Razorbacks played in the SEC Tournament in Tampa, Fla., two weeks ago, he ran into a fan who recognized him.

“I appreciate that fans still remember the shot and remember me,” Smart said. “It’s nice all these years later that people still identify me with that big moment.”

Smart helped Indiana Coach Bob Knight win his third and final NCAA championship along with titles in 1976 and 1981.

The 1987 Hoosiers were a No. 1 seed in the Midwest Region and opened in Indianapolis with a 92-58 victory over No. 16 seed Fairfield.

Arkansas Coach Eric Musselman was a backup point guard with the University of San Diego, a No. 9 seed in Indianapolis that lost to No. 8 seed Auburn 62-61.

If the Toreros had beaten Auburn, Musselman’s team would have played Smart’s team in a second-round game. Indiana beat Auburn 107-90.

In the San Diego-Auburn game, Musselman hit a three-point basket that put the Toreros ahead 27-19 during the first half. Video of the shot is available on the internet.

“Please go to YouTube, OK?” Musselman said with a smile in 2020 before Arkansas played Auburn. “If you go to that clip, they did not guard me. I have the audio. My buddy who put that out many years ago, I think he took the audio off because he liked me, because the announcer said that Auburn’s game plan was not to guard me when I came in.

More from WholeHogSports: 1 seeds have had Arkansas' number in tournament

Smart, a junior when he hit the game-winning shot against Syracuse, also played as a senior for Indiana, a No. 4 seed in the 1988 NCAA Tournament which was upset by No. 13 seed Richmond 72-69 in a first-round game.

That game had been Smart’s last involving the NCAA Tournament until last week when he was on the bench helping coach the Razorbacks beat Vermont 75-71 and New Mexico State 53-48 in first- and second-round games.

“It’s definitely a great experience to be coaching in the NCAA Tournament,” Smart said. “Now I just hope we can keep it going.”

Smart and his wife, Carol, have maintained a home in Dublin, Calif., located in the East Bay about 35 miles from Chase Center.

“It’s always nice to be home,” Smart said. “Playing in such a big game here means a lot.”

Smart and his family, including sons Andre and Jared, have made Dublin their primary home since 2003, when he began a nine-year stint with Golden State as an assistant coach and interim head coach.

“We made a determination a long time ago while our kids were in school that we wanted to have a permanent home,” Smart said. “We were not going to move them around. We held true to that.”

More from WholeHogSports: Razorbacks' defense stands out to Mark Few

Smart was an assistant coach with Musselman at Golden State. He also played for Musselman in the CBA with the Rapid City (S.D.) Thrillers and Florida Beachdogs.

“I’ve enjoyed my time this season working with these young guys and working with Muss and seeing how he runs a program,” Smart said. “He gives his assistant coaches a lot of freedom to operate, so It’s been great.”

When Musselman had to miss the Razorbacks’ game at LSU because he was recovering from shoulder surgery, Smart served as interim coach and led Arkansas to a 65-58 victory.

The game had added significance for Smart because Baton Rouge is his hometown and he grew up a few miles from the LSU campus.

“My mom and a lot of our family and friends were at the game,” Smart said. “It meant a lot.”

This year’s Final Four is back in New Orleans, another reminder of Smart’s big basket.

But Smart wasn’t interested in talking about a possible Final Four return to New Orleans with the Razorbacks.

“As a coach and as a player, you know never to look ahead,” Smart said. “I’m not even thinking about New Orleans.

“Our total focus is on Gonzaga.”