Williams vs. Timme one of Sweet 16's top matchups to watch 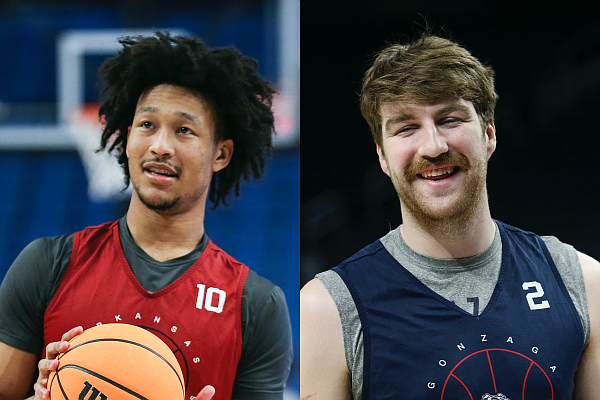 Arkansas forward Jaylin Williams and Gonzaga forward Drew Timme are shown during practice prior to the Sweet 16 of the NCAA Tournament at Chase Center in San Francisco on March 23, 2022.

SAN FRANCISCO — The two biggest and most interesting personalities on Arkansas’ and Gonzaga’s rosters will make up one of the matchups to watch Thursday when the teams meet at Chase Center in the Sweet 16.

One player, somehow, smiles more often than he takes charges and communicates on defense. The other is known for his on-court flair and many celebrations.

Williams, an All-SEC first-team selection by the league’s coaches earlier this month, is eager to face Timme, who averages a team-high 18.2 points on an efficient 59.2% from the field, including 61.4% on two-point attempts.

The Gonzaga star is coming off high-powered games to open the NCAA Tournament. In victories over No. 16 seed Georgia State and No. 9 seed Memphis, he put up 28.5 points and 13.5 rebounds.

“I’m ready for it,” Williams said of the matchup. “It's great to be able to play on this stage, and it's a challenge I've been looking forward to. I’m ready for it.”

Timme’s effectiveness on shot attempts inside the arc will be tested against Williams. According to CBB Analytics, Timme is 19 of 31 on shots outside the lane on the right side of the floor. He is 2 of 10 on the opposite side.

Williams’ biggest test will be challenging the 6-10 Timme around the rim, where he converts at a 77.8% clip on 162 attempts thanks to crafty play.

But Williams, a Fort Smith native, is plenty capable of providing opposing bigs headaches. During the regular season, opponents made just 37.2% of two-point attempts when he was the nearest Razorbacks defender to a shot, including 36.4% in SEC play.

Williams, who has taken 50 charges, also leads Arkansas with 40 blocked shots and his 46 steals rank second on the team to guard JD Notae.

“His rim protection is different than (Gonzaga forward Chet Holmgren’s),” Bulldogs coach Mark Few said of Williams. “He takes a lot of charges or attempts to take a lot of charges, so we have to be aware of that.”

Few also expressed how impressed he is with Williams’ comfortability on the offensive end, particularly in terms of being a face-up forward.

Inside the three-point line this season, he has made 6 of 11 jumpers around the right elbow, according to CBB Analytics, and 7 of 14 looks along the left baseline. Williams is shooting 38.8% — the second-highest mark on the team — on 1.4 midrange jump shots per game.

“He is kind of that entity,” Few said. “Maybe his numbers aren't off the charts, but he is scary enough that you have to guard him out there on the three line. He has a great lift fake and can put it on the deck and make plays.”

Timme, a junior from the Dallas area, is about as decorated as they come at the college level. Name an All-America team released in the last month and he was likely selected to it.

More from WholeHogSports: Transition defense of utmost importance to Razorbacks vs. Gonzaga

In Gonzaga’s second-round win over Memphis, Timme was at his best after halftime. He scored 21 of his 25 points in the second half and helped the Bulldogs overcome a 12-point deficit.

Though he is not ultra-gifted athletically, Timme can be tough on the offensive glass. He had eight offensive rebounds last week in Portland and has 17 games this season in which he has grabbed multiple Gonzaga misses.

“Drew is so adept driving and moving and doing what Drew does, mostly around the paint,” Few said. “I would say this, it's a nice luxury, though, to have.”

Opposite Timme is Williams, who according to KenPom metrics is the No. 14 player in the country in terms of defensive rebound rate at 29.0%. Williams’ 13 defensive rebounds against New Mexico State in the second round were the most by a Razorback in an NCAA Tournament game.

Williams and Timme, though different players stylistically, share common ground in regards to being focused on doing what it takes to help their teams advance.

Williams often deflects in press conference settings when provided the opportunity to praise his own play. Timme, too, is team-first despite some flamboyance.

Each side has respect for the other, but Williams and Arkansas are using the absence of national respect in the buildup to the game as a chip on their shoulder.

“We’ve been going against (that) this the whole year,” Williams said. “We started off the season not great, and we kind of just fought back throughout the whole year. We played against the No. 1-ranked team in the country and played against great teams all year, and we've kind of been that team that kept fighting and kept proving people wrong.

“I feel like we're at the same stage and we're going to do the same thing. We’re just going to keep fighting regardless.”