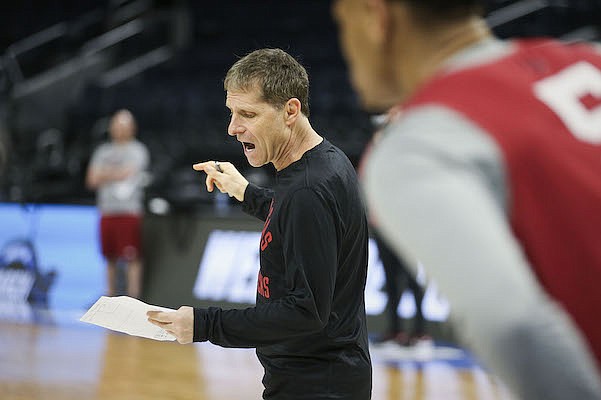 SAN FRANCISCO — Eric Musselman, fired as the Golden State Warriors’ coach after the 2003-04 season, has made a triumphant return to the Bay Area.

Musselman, in his third season as coach at the University of Arkansas, will lead the Razorbacks (27-8) against No. 1 overall seed Gonzaga (28-3) tonight in the NCAA Tournament West Region semifinals in Chase Center.

It’s a scenario Musselman said he never envisioned after being an NBA head coach with Golden State and later the Sacramento Kings.

“The day that I was either fired from the Kings or the Warriors, to think that I would be coaching in a Sweet 16 in the Bay Area, if anybody would have asked me that at that particular time I would have told them there was zero chance,” Musselman said Wednesday at a news conference. “Not 5%, not 10%. Literally zero chance of that happening.

“I guess the world has a funny way of working itself out. It’s a cool experience for my whole family.”

Musselman was 37 — the NBA’s youngest head coach at the time — when the Warriors hired him for the 2002-03 season.

Golden State, 21-61 the prior season, improved to 38-44 and Musselman finished runner-up in coach of the year voting to San Antonio’s Gregg Popovich.

The next season the Warriors finished 37-45 and Musselman was fired by new General Manager Chris Mullin.

The Warriors won just one fewer game than the season before despite having several key players out with injuries, including Speedy Claxton, Troy Murphy, Nick Van Exel, Adonal Foyle and Erick Dampier.

“I thought Muss was done wrong getting fired, because he did a really good job while he was with Golden State,” Claxton, who is now Hofstra’s coach, told the Arkansas Democrat-Gazette this season before the Pride played Arkansas. “He’s a relentless worker and we were always well-prepared for the games.”

Musselman might not have agreed with being fired by Golden State, but he understood why it happened and the parting was amicable.

A change in management, Musselman said, usually results in a coaching change. He learned that from his father, the late Bill Musselman, a long-time professional and college coach.

“I think just understanding that maybe it wasn’t completely the wins and losses, and there was new management, and they wanted to go in a new direction,” Musselman said. “But certainly the first year with the Warriors was as gratifying coaching that I had.

“I had fun, loved the guys. When Gilbert Arenas [Golden State’s point guard] is young, there’s always going to be some wacky stuff go on. But it was a great experience, and I feel fortunate to have coached an NBA team at such a young age.”

One of the best things for Musselman about playing in San Francisco is that his mother, Kris, will be able to watch him coach the Razorbacks for the first time in his three seasons at Arkansas. She lives in San Diego and traveled to San Francisco with her grandson Matthew, a student at the University of San Diego.

Musselman’s mother frequently attended his games at Nevada because there were direct flights from San Diego to Reno.

“At her age, it’s a little bit problematic to travel and change planes,” he said. “For her to be able to come watch us play is really really cool and extremely special to me.”

The Razorbacks made sure their coach made it back to San Francisco and that his mother could watch the team in person by beating Vermont and New Mexico last week in Buffalo, N.Y.

“I think that’s really cool just being able to get his mom to the game,” said Arkansas sophomore forward Jaylin Williams, who is from Fort Smith. “I know for me, my parents come to each of our home games because we’re so close to where I’m from. It’s cool we were able to make that happen for him.”

Said Arkansas All-America senior guard JD Notae, “For us to be able to play out here to get his mom to the game is a blessing.”

“I remember when we were in Buffalo, I talked to her and said, ‘We’re going to win two games and we’re going to come to the West Coast and see you,’ ” Danyelle Musselman said. “She was like, ‘I’m ready.’ ”

Raymond Ridder is in his 22nd year working in communications for the Warriors and said Musselman has the full support of the organization.

“When Eric was here, I loved everything about him,” Ridder said. “His passion, his energy he showed for his players, the fan base. Obviously his basketball knowledge. His ability to communicate.

“I know it’s been a long journey for him to get back here and I couldn’t be happier for him.

“The Warriors take a great deal of pride in the fact that anybody who comes through our organization, once a Warrior, always a Warrior.

“Whether you get traded as a player or you retire, or as a coach you go somewhere else, regardless of who signs your paycheck now, you’re always part of the family.”

Eric Housen is in his 29th year with the Warriors and is the team’s director of operations after serving as equipment manager. He makes sure that before every season, Musselman gets a package that includes Warriors shirts and shorts.

“I’m not surprised by the success Muss has had as a college coach, because he’s an extremely hard worker and always so well prepared,” Housen said. “He’s a fighter. He’s going to try to find a way to win every game. He’s intense. He’s a worker.”

Musselman, 5-7, was a backup point guard at the University of San Diego.

“Muss is small, but he’s a pretty good basketball player,” Housen said. “His ball-handling is ridiculous. I remember a lot of the ball-handing drills he did here. Some of the players couldn’t do what he was doing.

“He’s a pretty creative guy. He was good about keeping things fresh. It wasn’t the same thing every day.”

One of the houses Musselman said he bought in Danville, Calif., a San Francisco suburb, was sold to him by St. Jean’s wife.

Musselman said he also has maintained a relationship with Mullin and that their children attended school together.

“Being on the team bus with Eric and driving around San Francisco, he’s pointed out local sights and places where he used to hang out,” Arkansas Athletic Director Hunter Yurachek said. “A spot that used to be a parking lot is now a restaurant or apartment complex.

“Eric’s energy level, with him being back in San Francisco, is even higher than it normally is — and we know it’s always pretty high.

“As you walk around and see all the people that know him, it’s pretty cool.”

Danyelle Musselman said when the NCAA Tournament bracket was announced and the Razorbacks were placed in the West Region, she could tell it meant something extra to her husband.

“Eric said, ‘I want to coach in the Warriors’ building,’ ” she said. “The Bay Area is just a really special place for us. Eric and I got married here. Mariah [their daughter] was born here.

“Both of my stepsons went to high school here. We lived here, too. We’ve got so many family and friends coming to the game. It’s incredible.”

Getting enough game tickets for all the Musselman family and friends has been difficult.

“I can probably add up every game in the last three years, put every game together, and I’ve had more ticket requests for this one game,” Musselman said. “I have a cousin named Chris Anderson, and it’s really painful to tell him to go online and try to buy a ticket, because he’s one of my best friends.

“But I’m out of my allotment. They only give you so many tickets, man.”