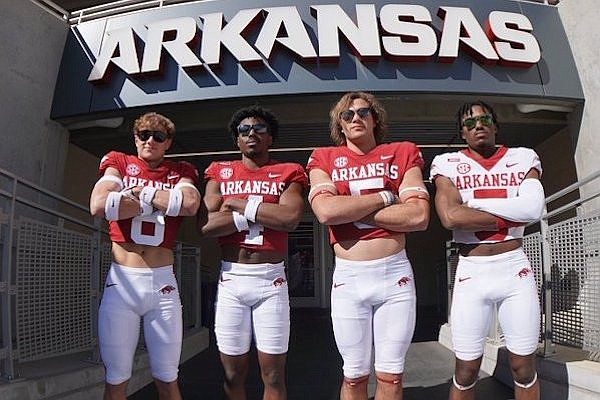 “I really love it down there,” Boone said. “It’s real nice and kind of my dream school. We did a photo shoot, watched practice and met with our position coaches.”

“I have loved to watch it,” Boone said. “It has been pretty amazing.”

Boone passed for 2,460 yards last season with 30 touchdowns, including seven in one game. He also rushed for 314 yards and six more scores for a team that finished 8-3.

“We had a pretty good season last year, but we just couldn’t finish it off like we wanted to,” Boone said of his team losing its final two games. “I think next year we are going to bounce back. We are all working together on stuff that we didn’t do well last year.”

Boone has 4,849 passing yards in his career with 51 touchdowns after playing in seven games as a freshman, 12 as a sophomore and 11 as a junior.

“He works really hard and we’ve been playing together since middle school so we have a lot of chemistry together,” Boone said. “He makes my job a lot easier as a quarterback.”

Luke Hasz is one of 10 Arkansas 2023 commits having chosen the Razorbacks on Jan. 22 over Oklahoma, where the four-star prospect was previously committed, as well as Alabama, LSU, Tennessee, Ole Miss, Oregon, Texas, Baylor and others.

Dylan Hasz recently got his first offer from Eastern Illinois and the wide receiver/defensive back is getting interest from Arkansas, Oklahoma, Oklahoma State, SMU, and Tulsa.

“They are both great players that have been very successful,” Boone said of the pair who have been part of Bixby’s current state record 49-game winning streak.

Boone had the luxury of throwing to Tease and Oklahoma signee Gentry Williams.

“Having Micha and those seniors to throw to made me successful,” Boone said. “Also the game was starting to slow down for me as the season progressed. Our team, it’s just the chemistry and bonding that helps it go. We push each other constantly and our coaches are always pushing us.”

He has a developmental plan for the spring and summer.

“During the off-season I am trying to learn how to spread the ball out a little bit more,” Boone said. “I think that will make me a more complete quarterback.”

Boone has an offer from Northern Iowa and several small schools and interest from Arkansas, Missouri, SMU, Dartmouth, Navy and Air Force.

He took a visit this week to Northern Iowa.

“My visit went really well,” Boone said. “I talked to the coaches there and even got to watch pro day up there. The facilities are nice and the coaches and the players have my interest.”

Boone is also a standout basketball player who averaged 11 points and 4 assists while leading his team to the Class 6A state tournament semifinals.

Boone, who said he will decided which sport he will play in college or both at a later time, will be competing for Team Trae Young or the Tulsa Hawks this spring and summer in AAU basketball.

“It is going to be real busy for me,” Boone said. “This summer, I’ll have football workouts, school basketball and AAU basketball. But it’s all fun.”