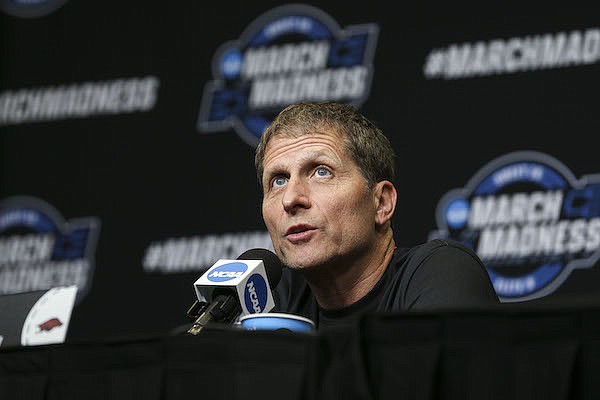 SAN FRANCISCO — After the University of Arkansas basketball team arrived in Tampa, Fla., for the SEC Tournament two weeks ago, the Razorbacks got a ride on a yacht.

When the Razorbacks traveled to Buffalo, N.Y., last week for the first two rounds of the NCAA Tournament, the team visited Niagara Falls.

After the Razorbacks practiced Wednesday at Chase Center to prepare for tonight’s NCAA West Region semifinal matchup against Gonzaga, they took a tour of San Francisco.

Arkansas’ team activities outside of basketball are in sharp contrast to last season, when the NCAA Tournament was held in a bubble in Indianapolis because of the coronavirus pandemic.

Teams had to stay secluded in their hotels except for traveling to practices and games and getting a couple of hours outdoors at Victory Field, home of Indianapolis’ Triple-A baseball team.

“Without a doubt it’s way better than the bubble,” Arkansas Coach Eric Musselman said of this season’s NCAA Tournament experience. “It’s not even comparable.

“Most of our guys have not spent a second in San Francisco [prior to arriving Tuesday]. It’s going to be a lifetime experience for our guys, without a question.”

“Just to get your mind off the game and basketball in general,” Toney said. “[Musselman] has tried to balance it out enough for us to just relax, rejuvenate, regroup.”

Musselman, a former NBA head coach, takes a professional approach to scouting reports, film work and practice, but he said it helps not to overload the players with too much information.

“If we’re touring the city, it’s one less film session, one less [way of] putting pressure on the guys,” Musselman said. “So I think it’s healthy for us to be able to do stuff.”

Musselman said making sure the players get to do some activities away from basketball doesn’t hinder their game preparation.

“Nobody prepares harder than what we do,” Musselman said. “More importantly, than our players do.

“You could quiz them on anything, and they know every opponent inside-out.”

“I’m pretty sure I’m speaking for the whole team when I say this — we’ve been going against this the whole year,” Williams said. “We started off the season not great, and we just fought back throughout the whole year.”

The Razorbacks are 17-3 in their last 20 games after starting 10-5, including 0-3 in SEC play. They went 6-2 against the other 5 SEC teams that made the NCAA Tournament, including victories over then-No. 1 Auburn and Kentucky; splitting 2 games against Tennessee; going 3-0 against LSU; and losing at Alabama by 1 point.

“We played against the No. 1-ranked team in the country and played against great teams all year, and we’ve been that team that kept fighting and kept proving people wrong,” Williams said. “So I feel like we’re at the same stage and we’re going to do the same thing, and we’re just going to keep fighting regardless.”

Eric Musselman is a basketball junkie who loves to watch games late at night. He watched a lot of Gonzaga’s West Coast Conference games before the NCAA Tournament.

“Eric is always scouting teams,” Arkansas Athletic Director Hunter Yurachek said. “He was watching Gonzaga back in December thinking about the opportunity to potentially play them in March.

“Taking notes on them and how they play. That helps in his preparation this week. I’ve never seen a coach prepare himself and prepare his team better for an opponent than Eric does.”

“If [WCC] games are ever on TV, it’s always Gonzaga,” Musselman said. “It’s not San Diego, Santa Clara. I promise you that.

“Gonzaga is always playing somebody in that conference [on national television]. I have seen them play throughout the year a lot.”

The Razorbacks will play Gonzaga at Chase Center, home of the Golden State Warriors and star guard Steph Curry, who is known for his long-range shooting.

Warriors rookie guard Moses Moody was an All-SEC guard for the Razorbacks last season, then the No. 14 overall pick in the NBA Draft.

“It’s really cool,” Arkansas forward Jaylin Williams said of playing on the same court as the Warriors. “It’s cool being in the arena.

“Me and JD [Notae] were talking and laughing … We were 10 feet behind the three-point line, and we were like, ‘Curry be pulling up from here.’ ”

Arkansas baseball Coach Dave Van Horn said his team will be paying attention to the Sweet 16 as best it can tonight in Columbia, Mo.

“They play [tonight] about the time we’re supposed to work out,” Van Horn said Wednesday of the basketball game between the Razorbacks and Gonzaga. “We’ll make as many adjustments as we can for them to at least see part of it. Hopefully it will go well.”

Van Horn said players and coaches were glued to TVs inside the Hunt Baseball Development Center last Saturday night following their 9-3 victory over Kentucky. The baseball game ended about midway through the second half of Arkansas’ 53-48 basketball victory over New Mexico State in Buffalo, N.Y.

“It’s exciting for all the teams on campus when one of the other teams is doing well and is in a national spotlight,” Van Horn said. “It’s a situation where with a couple more wins they’re right there.

“It can’t be pretty good,” Razorbacks Coach Eric Musselman said. “It better be great or we have no chance.

“The pace that they play at is incredible. Their wings run hard. They have a rim-runner. They have a great trail guy, so all those factors become important.

A reporter from the Wall Street Journal asked Jaylin Williams at Wednesday’s news conference if he’s completed his tax return after earning money through Name, Image and Likeness.

“It’s something that we have to do, but right now I’m focused on the game that’s going to be ahead of us,” Williams said. “I talked to my mom about it, and I have people that are going to help me.”

Matt Jones of WholeHogSports.com contributed information for this report