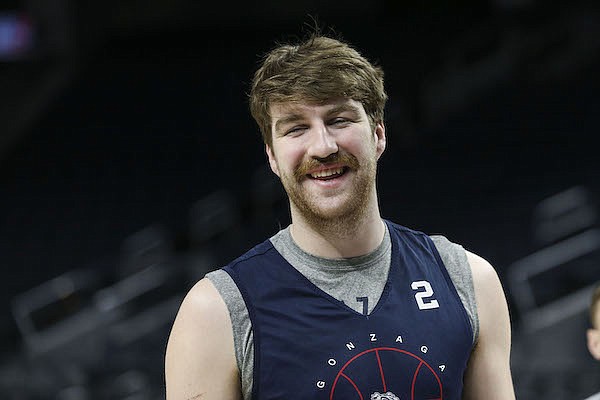 SAN FRANCISCO — University of Arkansas Coach Eric Musselman knows his team is a significant underdog against Gonzaga tonight in the West Region semifinals.

“We’re playing a team that a lot of people think is going to win the national championship,” Musselman said. “Nobody is talking about Arkansas even having a chance in this game.”

Gonzaga is a 9 1/2-point favorite against Arkansas and has odds of 9-4 to win the national championship and 4-7 to win the West Region.

The Razorbacks have national championship odds of 40-1 and winning the West Region odds of 10-1.

“I’ve got two good eyes and my internet works really good,” Musselman said. “I have great connection, and I haven’t found anybody that’s even giving us a chance to even be in the same arena with Gonzaga.”

Odds aside, the Bulldogs heaped praise on the Razorbacks during their Wednesday news conference.

“They are a really good freaking team,” Gonzaga 6-10 junior All-America forward Drew Timme said. “They’re in the Sweet 16, and just to win a game in the NCAA Tournament is hard enough.

“They pose a huge challenge. They’re a really good defensive team in the gaps. They’re good offensively as well and have a nice combination of athleticism, length, and then they have a stretch five [Jaylin Williams] who is good as well.

“It’s going to be a big challenge. I don’t think they’re being disrespected. I think they’re a really good team. At least in our eyes.”

“They can put five great players on the court with a few different lineups,” Holmgren said of the Razorbacks. “They can go big. They can go small, and they’re going to have a good game plan for us. We have to be ready.”

Gonzaga senior guard Andrew Nembhard, a transfer from Florida, said the Razorbacks like to push the pace like the Bulldogs.

“I think it will be a good game for us to get up and down the floor,” Nembhard said. “They have a lot of athletes, play a high-level defense, so we have to be solid on both sides of the floor.”

“Man, a handful,” Gonzaga Coach Mark Few said of Notae. “Watched a bunch of him.

“How adept he is at just little tiny slots to be able to get in the lane, and so good in transition. Plays with a lot of freedom.

“I mean, he can pull the three on you or he can fake and drive and get a crease and get downhill. Great at getting to the line.

“We’ll have to guard him as a group.”

“They do have a lot of weapons,” Musselman said. “They have a potential No. 1 [NBA] lottery pick in Holmgren, and Timme has been as good as any interior player in the entire country. Those two run a great high-low game together.

“Nembhard does a great job of advancing the ball even after made baskets. He’s one of the smartest point guards in college basketball. He’s really improved as a three-point shooter [38.5%].”

The 6-10 Williams, averaging 10.5 points and 9.8 rebounds, will go against Timme and Holmgren inside.

“I’ve just been impressed with how well and how comfortable he is facing up [to the basket].

“Maybe his numbers aren’t off the charts, but he is scary enough. You have to guard him out there on the three line, but he has a great lift fake and can put it on the deck and make plays.

“I think it’s a great match-up, and at the end of the day it’s all about making winning plays,” Holmgren said. “Whether it’s blocking a shot or taking a charge, they’re both winning plays.”

Holmgren said the Bulldogs have to anticipate Williams will put himself in position to draw charges.

“We just have to be ready for it, expect it, and not be caught off guard by it,” Holmgren said. “Play around it so that it doesn’t negatively affect us.”

“He’s a really skilled big, and he’s smart,” Timme said. “Taking charges isn’t fun. It kind of hurts, and I think he’s one of the best in the whole country.

“So he really puts his body on the line for his team to win, and that’s a really admirable trait I think that he has.”