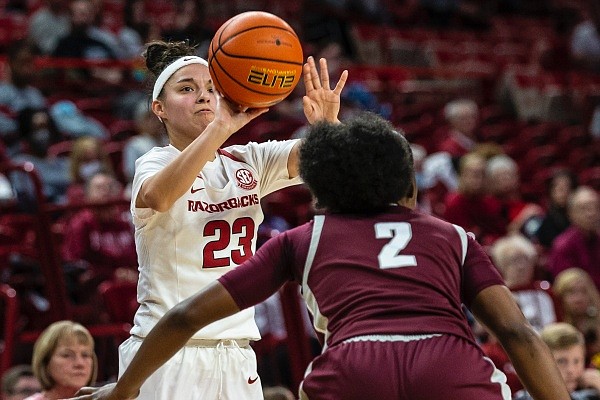 Arkansas senior Amber Ramirez hits a 3-point shot against University of Arkansas-Little Rock sophmore Sali Kourouma on Sunday, Dec. 12, 2021, during the second half of play at Bud Walton Arena in Fayetteville.

University of Arkansas guard Amber Ramirez has been invited to take part in the College 3-point Championships.

The event will take place in New Orleans at the Xavier University of Louisiana Convocation Center on Thursday at 8 p.m. and will be televised on ESPN. Ramirez, an All-SEC second-team selection this season, will go down as one of the top long-range shooters in program history.

The 5-9 guard from San Antonio averaged a team-high 15.4 points and 35.3 minutes per game for a team that made back-to-back NCAA Tournament appearances for the first time since 2002-03.