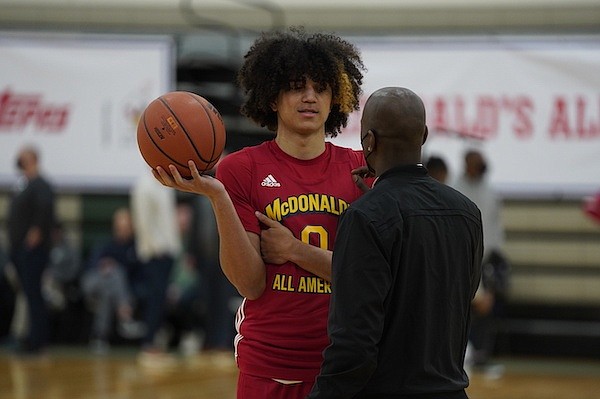 Anthony Black of Duncanville, Texas, is shown during practice for the McDonald's All-American Game.

He committed live on ESPN2 during the Powerade Jamfest, a skills competition for players who will participate in the McDonald''s All-American Game in Chicago. The game will be played Tuesday at 8 p.m. on ESPN.

“It was just being able to trust the coaches and know they have my best interest in mind, while also winning a lot of games and having a lot of fun,” Black told ESPN2 about his decision to play for the Razorbacks.

“That’s not a (Muss) bus, that’s freight train right now in Arkansas with Eric Musselman,” Biancardi said. “What a class with so many top-100 players and three 5-stars.

“Anthony Black gives them a playmaker, a defender, a driver, a guy that can play the point or slide over to the off-guard position. He told me this week that he rally enjoyed playing with Nick Smith and Jordan Walsh. I should have took that cue and figured it out.”

With Black, Arkansas adds a big guard to the class ranked second nationally behind Duke by 247Sports and Rivals. The Razorbacks and Blue Devils are the only teams with three players in the McDonald's game.

“I think I like to make the players around me better, just do things to help my team win,” Black said. “Just being a big guard, I think I have a natural eye for passing and just good vision. Just using those God-given abilities help make my teammates better.”

The coaching style of Musselman was a big part of Black’s decision. Musselman has led the Razorbacks to the Elite Eight of the NCAA Tournament the past two seasons.

“I like his energy and just the way he coaches his team,” Black said. “I can tell how much he cares about his guys and wants the best for his players.”

ESPN ranks Smith as the sixth-best player in the 2022 class. It ranks Walsh 10th and Black 20th.