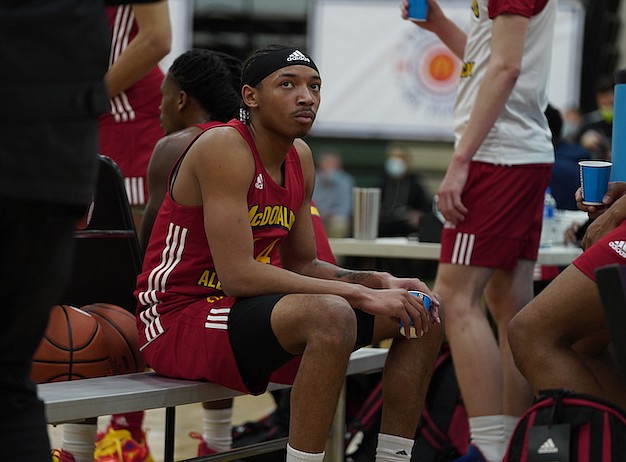 Nick Smith is shown during a practice for the McDonald's All-American Game in Chicago.

North Little Rock star Nick Smith is used to the big stage and will get another opportunity to share it with two future teammates Tuesday night.

The game will be televised live by ESPN from Wintrust Arena at 8 p.m.

“It has been pretty fun, just watching the state of Arkansas in general just having a good time, watching sports and winning,” Smith said of the Razorbacks' recent run that concluded in the Elite Eight. “I feel like in each and every sport, it has been fun for the last two years, especially for Coach (Eric Musselman) and the program.”

All six of Arkansas' signees and commits — including Magnolia guard Derrian Ford , Morrilton forward Joseph Pinion and Mobile (Ala.) McGill-Toolen forward Barry Dunning Jr. — are scheduled to arrive on campus early this summer.

It is a class ranked second nationally by ESPN, 247Sports and Rivals behind Duke.

“Next year, the guys we have coming in, we just have to come in and work hard during the summer time," Smith said. "It is not guaranteed that we are going to make it back to the Elite Eight next year, but at the same time, we have to have the same mindset that we can win a national championship and that is what we are going to try and do.”

Smith averaged 26.5 points, 8 rebounds and 7.3 assists this season while playing point guard for North Little Rock. He led the Charging Wildcats to the Class 6A state title.

It was North Little Rock’s second consecutive championship, but Smith’s first after transferring from Sylvan Hills.

“Nick is a good guard,” Ware said. “He is able to handle the ball well and if he sees you open, he is going to give it to you. He is a floor general and he is able to see the whole floor.”

Smith, Walsh, Ford, Pinion and Dunning signed with Arkansas during the November early signing period. Black will ink his letter of intent during the April 13-May 18 late period.

“Me and Jordan have great chemistry,” Smith said. “We have watched a lot of film on each other. Jordan is my guy. He’ll play his role, me, I’ll play my role and I feel like it is a good duo to have.”

North Little Rock won its last 20 games and beat Bentonville in the championship game with Smith being named the MVP.

“We had a great season," Smith said. "We had a lot of ups and downs, but at the end of the day we came out on top.

The three have been practicing in front of NBA scouts the last few days.

“For me, I just try to block that out,” Smith said. “I think I might be a little nervous, but I just try to act like they are regular fans just watching. Obviously they like my style of play, but I just want to keep working. I am still just 17 years old and I have still have got a lot more ways to go. I just have to continue to get better as a player.”