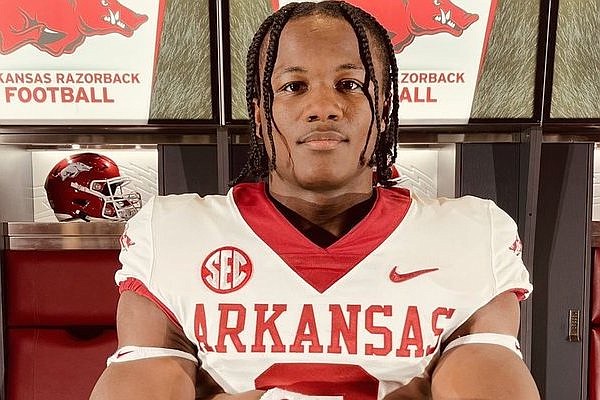 It’s very early in the recruiting process for freshman linebacker Kelvion Riggins, but the University of Arkansas has made a big impression on him.

Riggins, 6-1, 200 pounds, of South Oak Cliff High School in Dallas, has all the makings of becoming an elite prospect over the next few years.

Arkansas, Arizona, Miami, Oklahoma State and SMU have already extended scholarship offers to Riggins. He and his parents along with his three sisters visited Arkansas on Jan. 22, and it didn’t take long before the Hogs impressed.

“We came in and they greeted us well and they showed us around the campus. I just loved it,” Riggins said. “Everybody on the staff treated you like you were already family. Like you’re already on the team. They welcomed everybody.”

Riggins’ father Domiano echoed his son’s sentiment about the visit, especially after a meeting with Coach Sam Pittman.

“Immediately the coaches showed us a lot of attention,” Domiano said. “We could tell [Kelvion] was a priority to them. That was important to us. What really got me and my wife’s attention was when Coach Sam Pittman took us in his office and sat us down and talked to each person in our family.”

During the meeting, Pittman extended an offer to Riggins.

“Right now, Arkansas is still high on our list,” Domiano said. “We haven’t received that kind of treatment yet. We’ve been to a couple of other schools, but nobody did it quite like Arkansas.”

Domiano went into more detail on how he and his family were treated.

“Really, it was the attention,” Domiano said, “Like my son said, they made everyone seem important. It made us feel like we were important. Like he was a priority and they really want him to be there.”

While numerous other prospects were visiting, Domiano said the coaches and staff did a great job of interacting with his family and others.

“Even though there was several other kids there, I feel like they gave everybody that attention,” Domiano said. “All of the coaches were working hard. The system that have. They’re rotating kids around. They didn’t let anyone feel left out. With us in particular, we always had a coach with us to talk to us and guide us along the way with any questions we had.”

Riggins, who has a 4.0 grade-point average, has a 335-pound bench press, 425-pound squat and a 285-pound power clean. He praised linebackers coach Michael Scherer.

“He’s awesome,” Riggins said. “The whole time we were there, he was checking on us, making sure we were good. He was talking to my sisters. Treated my whole family good.”

He also said he appreciated how Scherer, the other coaches and staff members treated him and his family.

Riggins’ father said he was thrilled how Arkansas treated his son and family.

“I know he’s still young and we have a lot more visits to go on, but we haven’t received that kind of treatment from anybody else,” Domiano said.

Riggins, who plans to visit Arkansas again, said he appreciates how Scherer and the Hogs extended an early offer to him.

“They took the time to look at me and my film and made the decision like, ‘We want this kid, ’ ” Riggins said.

He and Arkansas freshman linebacker Jordan Crook have known one another prior to Crook’s arrival in Fayetteville in January.

“He loves it,” Riggins said. “He loves the campus. The coaches. Everything about Arkansas. He wants me to come up there with him.”