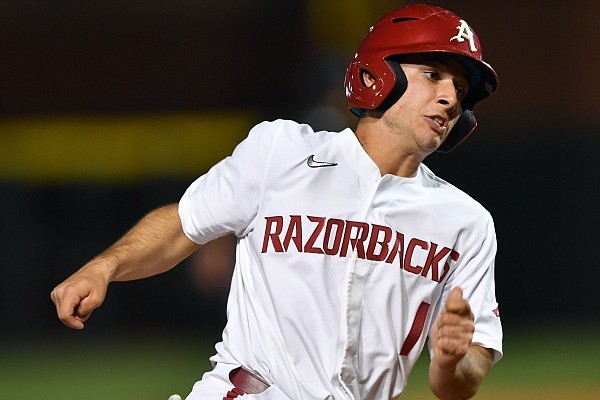 Arkansas second baseman Robert Moore heads to the plate Tuesday, March 29, 2022, on a single by left fielder Chris Lanzilli during the third inning against UALR at Baum Walker Stadium in Fayetteville. Visit nwaonline.com/220330Daily/ for the photo gallery.

FAYETTEVILLE — The University of Arkansas-Little Rock landed a series of big early blows but the No. 2 Arkansas Razorbacks got in the late, great shots on a windy Tuesday night.

The University of Arkansas rallied from a six-run deficit to blow past the mistake-prone Trojans for a 16-8 victory before an estimated crowd of 9,502 at Baum-Walker Stadium.

The Razorbacks (19-4) erupted for five runs in the fifth and four in the sixth, aided by a cavalcade of walks, wild pitches and hit batsmen, and batted around in both innings to take control.

“The mindset has to be, first off, you have to still feel like you can win the game,” Arkansas Coach Dave Van Horn said about getting behind big early.

“When you’re down six runs and the wind’s blowing in from right about 30 mph it’s hard to hit home runs and get back in the game, so you have to get walked, you have to have mistakes and you’ve got to get some big hits and we did all of that.

“We needed our pitchers to go out and throw up a couple of zeroes for us and give us a chance to chip away and get back in the ball game.”

Arkansas smacked three home runs during its decisive comeback, making a winner out of lefty Evan Taylor (2-0), who pitched clean innings in the sixth and seventh.

Cayden Wallace hit his fourth home run to kick start the big fifth, and freshman Kendall Diggs hit his first, a three-run opposite-field shot that bounced atop and over the left field wall in the eighth inning.

Braydon Webb took the team lead with his fifth home run, a two-run blast during the Hogs’ five-run eighth.

Webb and Michael Turner led the Razorbacks’ 15-hit attack with three hits each. Wallace, Chris Lanzilli and Jalen Battles added two hits each, and Diggs notched a career-high four RBI. Lanzilli has reached base safely in all 23 Razorback games.

Noah Dickerson started the scoring with an RBI single through the right side after Jorden Hussein and Nathan Lyons both reached on walks.

Adamiak got two outs in a row, but Miguel Soto delivered a clutch RBI single, then catcher Jake Wright provided the big blow, a two-run double.

UALR added to its lead in the second when Eldridge Figueroa singled and came around when the center fielder Webb misplayed a Hussein single into a two-base error. Miller Pleimann avoided further damage by retiring Lyons on a fly to right, then throwing Hussein out at the plate on a Dickerson dribbler.

The Trojans lead grew by another run in the third inning as freshman Aidan Garrett, making his fourth start, singled in Wright, who had reached on his second double.

Arkansas finally broke through against right-hander Jacob Weatherley in the bottom of the third to begin its comeback as Robert Moore’s double to left plated Webb, who had singled, and Chris Lanzilli’s single to center plated Moore to make it 6-2.

McWilliams’ opposite-field blast to left field in the fifth, his third of the season, gave the Trojans a 7-2 advantage.

The Arkansas bullpen held them there for the next three innings and the Hogs got to work against Weatherley and the Trojans’ relievers, who issued 8 walks, 2 hit batsmen and 4 wild pitches.

Wallace’s opposite-field home run to right-center pulled the Razorbacks within 7-3 to open the fifth, and Arkansas was just getting started.

Battles brought in a run on a bases-loaded single, then Diggs reached when Battles beat out a force play at second as the Trojans tried to turn a double play. Lanzilli scored on a wild pitch, then Drake Varnado’s single tied the score at 7-7. Soto threw Diggs out at home on the play to halt the scoring.

But the Hogs were ready for more in the sixth against reliever Matthew Davis (0-3).

Wallace reached on a fielding error to open the frame and advanced on a wild pitch. Webb singled to left and third base coach Nate Thompson threw up a stop sign before Soto bungled the scoop, allowing Wallace to score an unearned run.

Turner’s double drove in Webb and Battles added another bases-loaded single, his third in the last three games. Moore came around on Drake Varnado’s sacrifice pop-up to the shortstop Garrett to put Arkansas on top 11-7.

Diggs’ and Webb provided the pop for the Hogs’ five-run eighth to put the game out of reach.

UALR closed the scoring in the ninth against Zebulon Vermillion, as Soto’s double to deep center plated Andrew Pickering, who had doubled as a pinch hitter to open the inning.