NCAA champ could have luck on its side 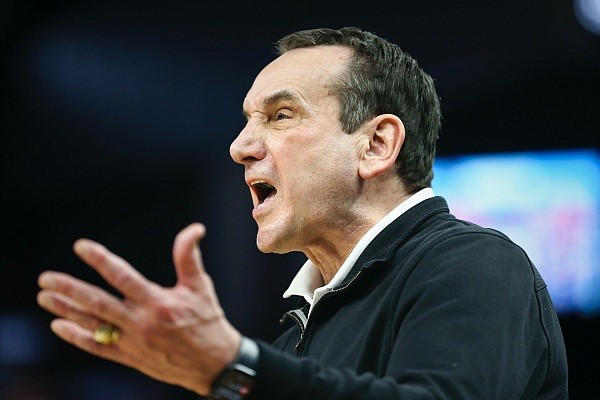 Duke coach Mike Krzyzewski reacts on Saturday, March 26, 2022, during the first half of the Elite 8 round of the 2022 NCAA Division 1 Men's Basketball Championship at Chase Center in San Francisco, Calif. Check out nwaonline.com/220327Daily/ and nwadg.com/photos for the photo gallery.

It is a little anti-climatic now.

The Final Four is fun, but it is nothing compared to the opening weekend or even the Sweet 16, and all of the remaining teams except for North Carolina were expected to be here.

Yet, the Tar Heels, who are a No. 8 seed, were 8-2 in their past 10 games and beat Duke in Cameroon Cameron Indoor Stadium, a mountain too high for most teams to climb.

North Carolina and Duke split during the regular season, and while the Blue Devils have obviously rededicated themselves to sending Mike Krzyzewski out on a winning note, anything can happen when these two teams play.

Kansas and Villanova kick off the Final Four in what could be an epic game.

The Jayhawks have the reputation of being a finesse team, but that hasn’t been obvious on the court, and the Wildcats are always physical.

These are blue blood teams with blue in their school colors, which helps, some claim, but it probably means a whole bunch of schools have blue in their uniforms.

All four have won national championships.

Handicapping the Final Four is not easy. Here’s what they did in the NCAA Tournament:

The winner may be the one who has the most luck.

It was no surprise Justice Hill is going to LSU.

The starting point guard at Murray State, who in addition to playing basketball, led Little Rock Christian to a state football championship, helped lead the Racers to a first-round win in the NCAA Tournament, and when his coach, Matt McMahon took the LSU job, Hill quietly entered the transfer portal.

He was widely recruited this last week but decided Tuesday he wanted to continue to play for McMahon even if it means foregoing another NCAA Tournament. LSU is facing seven major allegations of wrongdoing by the NCAA.

Hill averaged 13.4 points and 5.1 assists for the Racers this season. He has two years of eligibility remaining.

In the opening weekend, most story lines were about the officiating.

It appears the NCAA was giving a lot of young guys a chance to get some experience, and a lot of calls were missed or were wrong.

Officiating is a tough job, but it is the job the officials chose and are well paid for doing.

Yet, there is one rule the coaches are taking advantage of that needs to be changed.

In the last two minutes, coaches have unlimited challenges on possession. If it is even close, they ask for a review.

The officials can watch a review in 10 seconds, so do they really need to watch it eight or nine times?

Obviously the league that has looked the best and deserved every one of its five invites is the ACC, which currently has a 13-3 record and has two teams in the Final Four.

The Big East had six teams and with Villanova left is 7-5.

The Big Ten and SEC look like they got lucky to get as many bids as they did.

The Big Ten got nine schools in and went 9-9.

The SEC had six bids, and thanks to Arkansas winning three games went 5-6.

The Pac-12, the last of the so-called basketball conferences, got three teams in and went 4-3.