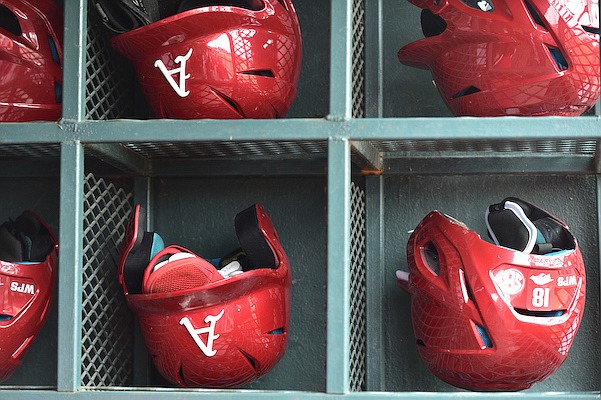 Arkansas batting helmets are shown in the dugout prior to a game against Indiana on Friday, Feb. 25, 2022, in Round Rock, Texas.

FAYETTEVILLE — Arkansas’ baseball game against Arkansas-Little Rock scheduled for Wednesday has been canceled.

Heavy rains and thunderstorms pushed through Northwest Arkansas on Wednesday morning and more rain was expected during the afternoon hours. One early-morning storm produced a suspected tornado in Springdale about 10 miles northeast of Baum-Walker Stadium.

The second-ranked Razorbacks defeated the Trojans 16-8 on Tuesday night. It is unclear whether the teams intend to make up the second game of the series at a later date.

Single-game tickets purchased for Wednesday’s game can be exchanged through the Razorback Ticket Office.

It is the second consecutive week Arkansas has had to cancel a Wednesday game due to weather. The Razorbacks also canceled a scheduled game against Nebraska-Omaha at Kauffman Stadium in Kansas City last week.

Arkansas (19-4, 5-1 SEC) is scheduled to play again Friday when reigning national champion Mississippi State (16-10, 3-3) visits Fayetteville. The first game of the three-game series is scheduled to be televised by SEC Network beginning at 6 p.m.