Razorbacks improving ahead of gymnastics regional 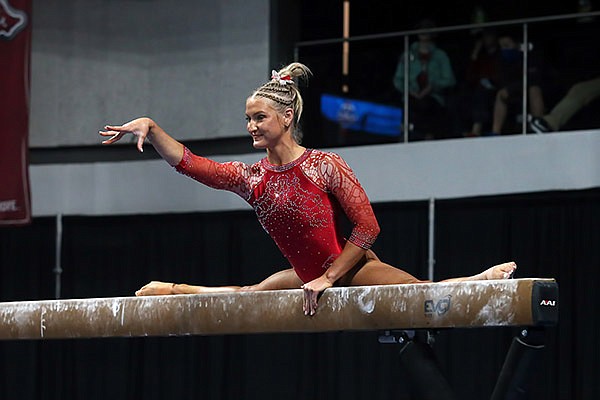 Arkansas' Sarah Shaffer competes during the SEC Gymnastics Championships on Saturday, March 20, 2021, in Huntsville, Ala. (Photo via SEC Pool)

FAYETTEVILLE — The University of Arkansas gymnastics team might be considered a slight underdog as the third-highest seed tonight at the NCAA Norman (Okla.) Regional in the Lloyd Noble Center.

However, third-year Arkansas Coach Jordyn Wieber sees her team riding a crest into the postseason.

The Razorbacks won the Denver Quad meet on March 13 with a 196.975 with 26 of 26 routines on point, then had a strong showing on three events while finishing second in the early session of the SEC Championships on March 19.

Wieber said she feels good about the team’s draw in Norman, where No. 1 seed Oklahoma is the prohibitive favorite.

The Razorbacks (8-14) will compete in the 7 p.m. session along with the Sooners, No. 16 Arizona State and Arizona, the winner of Wednesday night’s play-in competition against West Virginia. In the early session, No. 8 Minnesota and No. 9 California will be the favorites against Boise State and Utah State.

The top two teams from each session will compete in a four-team format Saturday with the top two finishers from that competition qualifying for the NCAA Championships on April 14 at Fort Worth.

“I’m just really excited the team is I would say going on an upward trend over the last few meets with the exception of beam at SEC,” Wieber said. “But as far as the other events go, we’ve been a lot more consistent, hitting a lot more routines.

“In the gym this week, they’ve been fired up and detail working and just ready to walk through any door that happens to open. I’m excited about regionals.”

The Razorbacks have a senior-laden outfit that scored a 197.2 in a Week 2 loss at Walton Arena against Auburn, then struggled with consistency through the middle portion of the season.

However, gymnasts like seniors Kennedy Hambrick, Amanda Elswick, Bailey Lovett, Sarah Shaffer, Maggie O’Hara and Savannah Pennese have been through plenty of pressure meets and have begun putting together stronger performances in recent weeks.

Smith, who won her first all-around with a 39.425 against Southeast Missouri State on Feb. 6, is coming off a courageous showing on the beam, when she hit her nose on her backward mount and stayed on the apparatus with her nose bleeding throughout the routine.

Sedlacek, who suffered a concussion during vault warm-ups in Denver, is questionable for the regional.

The Razorbacks will open the competition on the uneven bars and rotate to the beam, floor and vault to complete the meet.

Oklahoma, winners of four national titles in the last eight years, leads the country with a national qualifying score of 198.14 as one of only three teams with a 198 or better NQS. The others are SEC champion Florida (198.135) and Michigan (198.015).