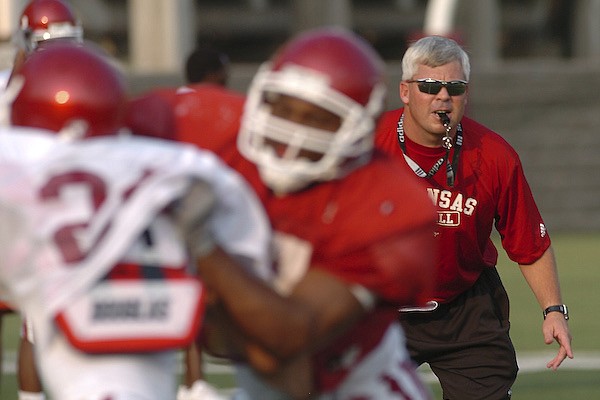 Is Arkansas football back? That was my question to James Shibest while we watched Sam Pittman’s third squad work through its fourth day of spring practice on Tuesday.

“I think so, now with Sam,” said Shibest, in the first of two days with an inside look at the Razorbacks as a guest of Pittman, his new Hot Springs neighbor.

Shibest was an All-Southwest Conference wide receiver at Arkansas (1983-86), then coached special teams, tight ends and wide receivers at his alma mater under Houston Nutt from 2000-07. He coached with Nutt at Ole Miss (2008-11), then joined Justin Fuente for 10 seasons as special teams/tight ends coach at Memphis and Virginia Tech.

Shibest and his wife, Dianna, moved to Hot Springs following last season when Fuente and his staff were fired.

Pittman has a vacation home on Lake Hamilton. Shibest and Dianna live full-time nearby in a house adjacent to Hot Springs Country Club.

The Shibests have visited the Pittmans in Hot Springs. Shibest said Pittman' new lake property — complete with a statue of a Razorback bathed in red at night — is something to behold.

“I’m going to be honest, I’ve done well over the last, say, 10 years,” Shibest said. “I was paid well at both Memphis and Virginia Tech. That’s about when coaching salaries escalated. Coach (Frank) Broyles was pretty tight here.

“But I didn’t make enough that I could live on the lake and have a place like Sam and Jamie. But we like where we are because I love golf and I also enjoy (Oaklawn Park) horse racing.”

Shibest said he became friends with Pittman when both coached in the Kansas junior college ranks. Shibest coached at Independence, Garden City and Butler County, where he won national championships in 1998 and 1999.

Pittman was head coach at Hutchinson from 1992-93 during the same period Shibest coached at Independence.

“We’ve always kept up with each other through the years,” Shibest said. “If you are Sam’s friend, you are always his friend. I love him.

“What you see is what you get. He’s straightforward and real. You hear that a lot about him and it’s true. I have always appreciated the way he handles everything. He invited me to come see what’s happening here. It’s pretty amazing.”

That’s amazing in all respects.

“The stadium is really beautiful,” Shibest said. “Of course, I’m partial. I grew up in (Houston), but this is really home to me. I have had some great times here.

“I won’t ever forget the way we beat down Tennessee here (in 2006). That’s one of my favorite memories of all-time. That was part of a streak of 10 straight victories.

Arkansas rolled past the Vols 31-14 in that 2006 blowout. Darren McFadden rushed for 181 yards. He ran for two touchdowns and threw for another.

Shibest went through the list of players he coached at Arkansas, all with smiles. There were particular conversations about some of the biggest personalities among his former players, wide receivers Steven Harris, Richard Smith and George Wilson, and tight end D.J. Williams.

“What I remember most is that we got to coach a lot of great people,” Shibest said. “I keep up with them. I talk to George. What was tough on him is that he had three coaches in three years. He came under Fitz Hill, then had George Pugh and then me. He is such a great person. He adjusted to all of us.”

There was a smile Tuesday as the punters were about to take the field for a special teams segment. Midterm arrival Max Fletcher (6-5, 168 pounds) of Melbourne, Australia, was pointed out to Shibest in some 11-on-11 work in his battle with returnee Reid Bauer.

“I had a great Australian Rules punter at Memphis in Tom Hornsey,” Shibest said. “These (Australian rules) guys can be a real weapon.”

Hornsey was the 2013 Ray Guy Award winner as the nation’s best punter.

Fletcher’s end-over-end punches — they hardly look like punts — tumbled toward the corner pylon, between 55 and 60 yards. They looked like they were aimed with precision.

“Yeah, he’s got it,” Shibest said, with an emphasis on it.

Shibest knows the Hogs have another special teams star that has “it,” too. He said he tried to recruit placekicker Cam Little, the sophomore-to-be who nailed 20 of 24 field goals and all 46 extra points for the Hogs a Freshman All-American last season.

There was a lot of talk about the offensive line. It was clear that Pittman had gone over the detail of what he’s building in that area, no surprise to Shibest.

“He’s going to have a great O-line,” Shibest said. “You just know that. He gave me the (specifics) of that young group.”

There was a visit about the coaching staff. Shibest said there is no doubt that offensive line coach Cody Kennedy is a clone of Pittman. Players rave about the relationship they have with the second-year man whom Pittman trained at Georgia.

Center Ricky Stromberg spoke about Kennedy two weeks ago in a spring preview interview. An insider revealed that Georgia tried to hire Kennedy earlier this winter when Matt Luke resigned as the Bulldogs' O-line coach.

“He was the perfect fit for us,” Stromberg said. “He trains us in meetings on the calls for each look and then we make them. We see things the way he sees them and we love playing for him.”

Shibest has seen the type of offensive line talent Pittman has recruited through the years. They are always freaks in size and footwork.

Shibest wanted to see Pittman’s practice and the way he broke down meetings. He had not been on campus long when we met on the sideline at practice.

“I look forward to spending time watching this staff,” Shibest said. “I’m also going to have fun seeing some guys who were here when I was last here, like Dean Weber and Bobby Allen. I’ve already called both. I understand that Louis Campbell is around, too.”

Shibest isn’t sure if he will return to coaching, but he wouldn’t be taking notes if he didn’t have that desire.

“I’m OK if that doesn’t happen again,” he said. “I am happy if Hot Springs is my last stop. Dianna has put a lot into that house. I think she has it the way she wants it.

“I’ve always thought I’d retire in this area, either Hot Springs or Fayetteville. Dianna and I have family in Kansas City and South Texas, so we are about halfway in between. So it makes it easy for family to visit.”

There seems to be interest in a return visit to Fayetteville for a game. He said he’s got some connections with the Dallas Cowboys and he’d probably make some games there, too.

“I have had such great times in this stadium,” Shibest said. “It’s funny that the old practice field is gone. And, our offices in the north end zone are gone now. I have trouble with my ankles. I loved playing in Little Rock — all players loved that place — but I think playing on that rock-hard field there did something to my ankles.”

James Shibest smiles a lot, even about the aches and pains. They probably remind him of lots of good times.