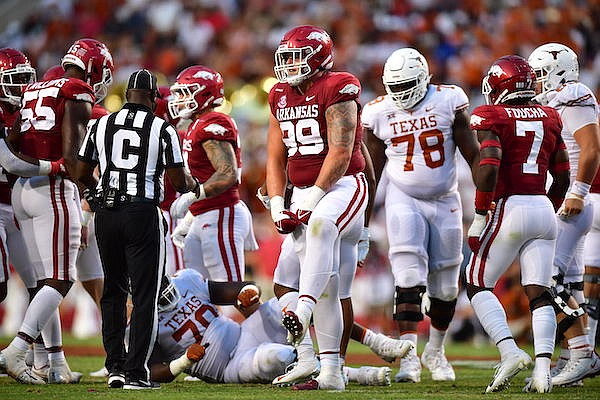 Arkansas defensive tackle John Ridgeway (99) celebrates a tackle during a game against Texas on Saturday, Sept. 11, 2021, in Fayetteville.

FAYETTEVILLE — Big John Ridgeway is headed to the Big D.

Ridgeway, the 6-5, 321-pound one-year wonder at defensive tackle for the University of Arkansas, highlighted Day 3 of the NFL Draft for the Razorbacks, going to the Dallas Cowboys with pick No. 178 in the fifth round.

Arkansas cornerback Montaric “Busta” Brown was taken with the first pick of the seventh round, No. 222 overall, by the Jacksonville Jaguars to cap off the Razorbacks’ three picks, tying 2017 and 2019 for the program’s highest total since five were drafted in 2016.

Receiver Treylon Burks of Warren was selected in the first round with pick No. 18 by the Tennessee Titans on Thursday night.

Burks is the highest-drafted Arkansas receiver in NFL Draft history. A clip of Burks’ selection and his hug of great-grandmother Freda Burks at his house party in Searcy ran as a clip on NFL Network’s draft highlights during the sixth round Saturday.

In addition, other players with ties to Arkansas were taken in the final four rounds on Saturday.

Former Little Rock McClellan running back Pierre Strong of South Dakota State was drafted in the fourth round with pick No. 127 to the New England Patriots. Former Arkansas receiver Michael Woods, who finished his career at Oklahoma last season, went to the Cleveland Browns with pick No. 202 in the sixth round.

Crossett native and Ouachita Baptist cornerback Gregory Junior was also taken by the Jaguars, with pick No. 197 in the sixth round.

Ridgeway transferred from Illinois State for his senior season to be seen on a bigger stage and the former wrestler made waves as a fierce interior defender.

Ridgeway posed for a picture with Dallas Cowboys owner Jerry Jones, the former Razorback, with their arms around each other after Arkansas upset the No. 7 Aggies 20-10 on Sept. 25 at the Cowboys’ AT&T Stadium in Arlington, Texas.

Ridgeway told members of the Cowboys’ media he chatted with Jones as they were posing for that picture, telling him, “You’re going to draft me. Watch, and I’m going to take over the Dallas Cowboys.”

After the Cowboys reached Ridgeway by phone, he spoke with Jones, Coach Mike McCarthy and defensive coordinator Dan Quinn on a call released by the Cowboys.

“You old Razorback, I want to put a star on that helmet,” Jones said on the call.

“Sounds good to me,” Ridgeway replied. “I’m with it for sure.”

Speaking with McCarthy, Ridgeway said, “I’m excited. Time to get back to Dallas.”

“Mount Ridgeway!” McShay said. “Forget pass rush, we don’t need it. He’s not going to provide it. But good luck running around this guy. He’s 6-5, 321 pounds.

“I’m telling you, what I love about him, the long arms, the power. Watch his helmet every time. As those 35-inch arms are locked out, his eyes are always locating the ball and he does it faster than any defensive tackle does in this class. He is really tough to run around because he’s big, he’s tough, he’s long and all that, but he can get off blocks and make plays tackle to tackle.”

Ridgeway had 39 tackles, the highest total for a UA defensive lineman last season, 4 tackles for loss and 2 sacks while playing in the final 12 games. He missed the season opener one week after undergoing an appendectomy.

“He’s just a beast inside,” Odom said. “He took up, a lot of times, two guys and filled up space.”

ESPN rated Ridgeway as the 138th best player available in the draft and the No. 8 defensive tackle.

Ridgeway and Brown both had one season of eligibility remaining, but both elected to start their professional careers. Pittman made no secret of his hope for both of them to return.

He touted Ridgeway’s contributions in December, projecting him as a fourth- or fifth-round draft prospect.

“If I could go out and get a John Ridgeway every year in the portal, we would take as many as they would give us,” Pittman said. “He’s been a great kid. He works hard. I just think he’s an outstanding guy and had a really good year for us.”

Ridgeway led the Razorbacks’ interior linemen with a 66.6 run-defense grade in 218 snaps. He ranked fifth in the FCS at Illinois State with a run defense grade of 90.6 in 2019.

Brown had a big senior season, tying for the SEC lead with 5 interceptions and racking up 54 tackles, 1 tackle for loss, 6 pass breakups, a forced fumble and a fumble recovery.

The fifth-year senior from Ashdown was a first-team All-SEC selection. His five interceptions were the most for a Razorback since safety Tramain Thomas had five in 2011.

Brown’s forced fumble and recovery came at the Arkansas 1 early in the fourth quarter at Alabama with the Crimson Tide leading 34-28.

Brown, rated the No. 1 recruit in Arkansas in the recruiting class of 2017 by Rivals, Scout and 247Sports, redshirted his first season in college. He made three starts as a redshirt freshman in 2018, and went on to record 132 tackles and 7 interceptions while making 34 career starts.

Morgan agreed to a deal with the Jaguars immediately after the draft, while Clary has signed with the Dolphins.

Former Razorback Cole Kelley, who completed his career with a couple of big seasons at Southeastern Louisiana, was ranked the No. 7 available undrafted player at quarterback.