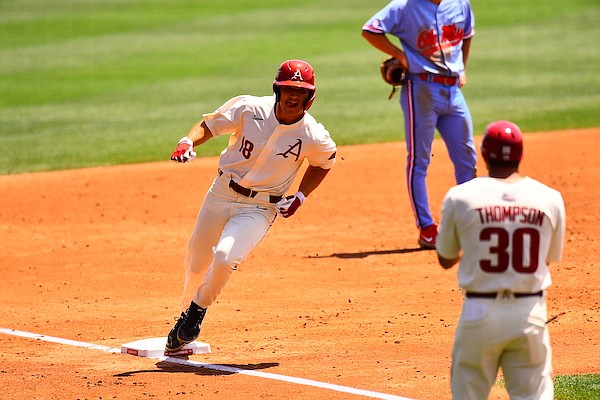 Arkansas' Chris Lanzilli (18) rounds third base after hitting a home run during a game against Ole Miss on Sunday, May 1, 2022, in Fayetteville.

FAYETTEVILLE — Arkansas hit a pair of two-run home runs and Ole Miss stranded the bases loaded in the ninth inning as the fourth-ranked Razorbacks won 4-3 on Sunday at Baum-Walker Stadium.

Ole Miss three-hole hitter Tim Elko, the SEC’s home run leader, flied out to center field on a 1-2 pitch in the ninth inning. Arkansas closer Brady Tygart walked the bases loaded on a series of borderline pitches that were called balls.

The Rebels walked 9 times Sunday, but had only 5 hits and stranded 9 base runners. Arkansas had 10 hits.

The fourth-ranked Razorbacks won the series after losing the first game between the teams Friday. Arkansas won its third consecutive series over Ole Miss dating to a 2019 NCAA super regional.

Coupled with Auburn’s loss to Tennessee on Sunday, the Razorbacks (34-10, 14-7 SEC) took a two-game lead atop the SEC West with three weeks remaining in the regular season. Arkansas plays at Auburn next weekend.

Chris Lanzilli hit a two-run home run in the third inning and Michael Turner hit a two-run homer in the fifth to give the Razorbacks the lead for good Sunday. Both home runs came against Ole Miss starter Derek Diamond with two outs in an inning.

Lanzilli’s 403-foot shot to center field scored Cayden Wallace, who doubled to right field with one out in the third inning. It was Lanzilli’s 48th career home run, which tied him for fifth among active Division I players.

Turner’s line-drive homer in the fifth scored Lanzilli, who hit a two-out infield single. Turner’s hit was clocked at 102 mph off the bat and bounced off the wall of the Hunt Center in right field.

Arkansas hit six home runs during the series against Ole Miss to account for all 12 of their runs. The Razorbacks lost 4-2 on Friday and won 6-3 on Saturday when freshman designated hitter Kendall Diggs hit a three-run home run in the ninth inning.

Relievers Zack Morris and Tygart each pitched three scoreless innings for Arkansas. Tygart, who grew up in Hernando, Miss., about 60 miles from the Ole Miss campus, pitched five scoreless innings during the series against the Rebels.

He allowed a pair of two-out base runners in the seventh inning Sunday when Justin Bench hit an infield single and Jacob Gonzalez walked. Tygart struck out Elko, who swung through three consecutive breaking pitches.

Tygart retired all three hitters he faced in the eighth inning, including TJ McCants, who nearly homered, but hooked a drive to right field just foul.

Morris inherited a base runner with Ole Miss ahead 3-2 in the top of the fourth inning. His three-inning outing lowered his team-best ERA to 1.00 among qualifying pitchers.

Morris, a left hander from Cabot, has not allowed a run since an April 5 game against Central Arkansas. In his last five outings, Morris has thrown 11 1/3 innings of scoreless relief.

The Rebels (24-19, 7-14) chased Arkansas starter Jaxon Wiggins on Kemp Alderman’s two-run single with no outs in the inning. Wiggins allowed 3 runs, 3 hits and 3 walks, and struck out 2 in a 3-inning no-decision.

It was the second consecutive short start for Wiggins, who was chased after allowing five runs with one out in the first inning at Texas A&M last week. Wiggins’ ERA rose to 5.75.

Diamond allowed 4 runs, 8 hits and 1 walk, and struck out 2 in a 4 2/3-inning start. His final pitch was the Turner home run in the fifth.

Jalen Battles walked with one out but could not advance in the eighth.

Brady Tygart will face the Rebels' 7-8-9 hitters in the ninth.

TJ McCants nearly hit a game-tying home run with two outs, but he hooked it foul down the right-field line. He struck out on an inside breaking pitch by Brady Tygart in the next pitch.

Tygart has thrown two scoreless for the Razorbacks today. That was a more efficient inning with only 15 pitches.

Brady Slavens flied out to the warning track in center field for the first out. Chris Lanzilli popped up to the infield and Michael Turner flied out to left.

That was the Razorbacks' first inning today without a base runner.

Brady Tygart worked around a pair of two-out base runners in the seventh. He struck out Tim Elko, the Rebels' best hitter, who swung through three consecutive breaking pitches to end the inning.

Tygart had to throw 28 pitches that inning. The pitch count is something to watch because Tygart threw two innings last night.

Braydon Webb reached on an error and Kendall Diggs walked in the next at-bat with one out, but Cayden Wallace hit into a double play.

That was Ole Miss' third double play today. Both defenses have been really sharp this series.

Brady Tygart, who grew up about an hour from the Ole Miss campus, is coming into the game to try for a three-inning save. He threw two innings last night.

The ballpark just held a hard-hit line drive by Calvin Harris. Chris Lanzilli caught it with his back at the fence at around the 350-foot mark of right-center field.

Zack Morris walked TJ McCants in the at-bat before. Ole Miss also had a base runner when Kevin Graham reached on an error by shortstop Jalen Battles, but Battles and Robert Moore teamed for another double play — the team's third today and ninth of the weekend — to record the first two outs of the inning.

Morris has thrown three scoreless innings for the Razorbacks. Brady Tygart is throwing in the bullpen.

Michael Turner's two-run home run with two outs has given Arkansas the lead. That was clocked at 102 mph off the bat and was a line drive that went off the Hunt Center in right field.

All 12 of Arkansas' runs in this series have come via six home runs.

Robert Moore hit a two-out single to right field on the first pitch from Gaddis, but the inning ended when Jalen Battles grounded out up the middle on a 2-2 pitch.

Robert Moore turned another incredible double play in the fifth inning to erase a leadoff hit by Justin Bench.

Moore fielded a ball near the grass between first and second, turned and threw against his body to Jalen Battles at second base, and Battles completed the double play with a throw to first.

That was Arkansas' eighth double play of the weekend.

Tim Elko flied out against Zack Morris to end the inning. Morris has thrown two innings of scoreless relief.

The Razorbacks have had a base runner in every inning, but only two runs to show for it through four innings.

Braydon Webb doubled with two outs in the fourth. The inning ended when Kendall Diggs grounded out.

Derek Diamond has thrown 46 of 68 pitches for strikes for Ole Miss.

Ole Miss is back on top after the first three hitters of the fourth inning reached.

That sent Arkansas to the bullpen for Zack Morris, who inherited a base runner with no outs. He walked Hayden Dunhurst with two outs, but Peyton Chatagnier flied out to end the inning and strand two base runners.

Cayden Wallace reached with a one-out bloop double to right field and Chris Lanzilli hit a two-run home run to center field to give the Razorbacks the lead.

That was Lanzilli's 48th career home run, which is tied for fifth among active Division I players. It was his sixth home run this year.

Michael Turner followed with a two-out walk. The inning ended when Ole Miss first baseman Tim Elko made a great snag on a hard-hit ball by Robert Moore. Had the ball gotten past Elko, Turner might have scored from first base.

Jaxon Wiggins worked around a two-out walk to Justin Bench in the third inning. It was Bench's second walk in two plate appearances.

The inning ended when Jacob Gonzalez grounded out to Robert Moore at second base.

Wiggins seems to have settled in a little bit after the shaky first inning.

Jalen Battles and Jace Bohrofen had one-out singles, but Braydon Webb grounded into a double play to end the inning.

Both teams have done a great job turning double plays this weekend.

Jaxon Wiggins struck out a pair of hitters in a quick, 12-pitch second inning.

Cayden Wallace singled on the first pitch of the inning, but he never advanced. Brady Slavens popped up to third base, Chris Lanzilli struck out and Michael Turner flied out to left field.

Jalen Battles and Robert Moore teamed to turn an inning-ending double play on a ground ball from Kevin Graham. That was the Razorbacks' seventh double play of the series.

It is a bright, sunny day at Baum-Walker Stadium for the rubber match of the series between Arkansas and Ole Miss.

Arkansas designated hitter Kendall Diggs, the hero of last night's game with his three-run home run in the ninth inning, is back in the lineup today.

The Razorbacks will throw right hander Jaxon Wiggins today. Wiggins was rocked during a five-run first inning at Texas A&M last week, but he has pitched better at home.

Ole Miss will throw right hander Derek Diamond, who has a 6.29 ERA.

Arkansas is wearing its cream-colored jerseys with camouflage hats today. The camo hats are part of a military appreciation initiative.