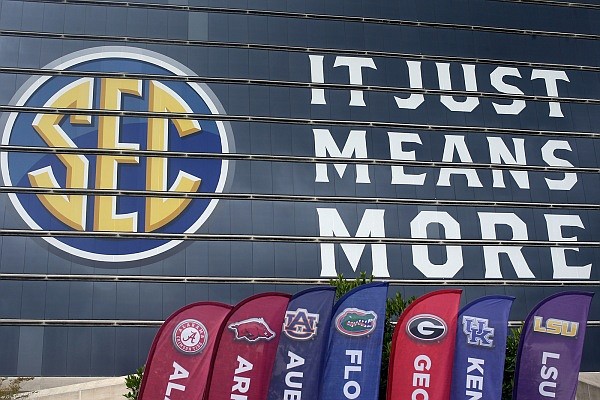 The SEC logo is displayed at the Hyatt Regency hotel in Hoover, Ala., on July 19, 2021, during SEC Media Days for football. (Butch Dill, AP)

Someone could take the numbers of the latest NFL Draft and make an argument that Arkansas’ Sam Pittman should have been the SEC Coach of the Year.

The SEC had 65 players drafted, once again the most of any conference, led by Georgia with 15. The Bulldogs, the defending national champions, had five defensive players drafted in the first round.

Surprisingly, Alabama was not even a close second, but third with seven players drafted.

LSU, which finished tied for last in the West, was second with 10, Ole Miss was fourth (6), Tennessee had five, followed by Texas A&M and Kentucky with four apiece.

Arkansas, Florida and South Carolina had three. Mississippi State and Missouri had two and Auburn one.

The Razorbacks finished tied for third in the SEC West this past season and tied for the fifth best overall record.

The four schools who finished with better records all had more players drafted than Arkansas and three of those had at least twice as many.

Apparently yours truly missed it, but the University of Arkansas refinanced all its capital debt, taking advantage of lower interest rates that saved them $10 million which was huge during the covid-19 year when every athletic department in America lost money.

The expansion of Reynolds Razorback Stadium cost $160 million for 3,200 additional seats that are considered premium seats.

The money also paid for a new athletic facility, which was needed.

All of that was done under the previous athletic director, not Hunter Yurachek.

Last week’s Garth Brooks concert in Reynolds Razorback Stadium may have set an attendance record and helped the athletic department bring in some extra revenue.

With all sorts of wagering coming to Arkansas — through the casinos — get ready for some odds on some strange things.

Like which team will fumble first in a game, get the first penalty, score, etc… etc…

Yesterday’s email brought an interesting bet from BetOnline. Who will be the offensive and defensive rookies of the year after the next NFL season?

Treylon Burks, the former Arkansas Razorbacks receiver, was No. 4 at 8-1.

Burks was taken by the Tennessee Titans with the 18th pick of the first round last week and appears is being counted on to be the starting slot receiver.

If he remains injury free, those odds may be too high.

Burks has a great work ethic and will play hurt. There is a difference in hurt and injured and he knows where to draw the line.

No one will ever question his integrity. The young man was invited to be part of NFL Draft in Las Vegas and passed because he wanted his grandmother to be there with him.

Judging by the clips on local television, grandma was right beside him. There was a huge turnout for the watch party, including Razorback head coach Sam Pittman, who stayed in the background.

Pittman wanted it to be Burks’ night, not a photo op for the head coach.

Speaking of wagering: Oaklawn Racing Casino Resort takes bets on horse racing all over the world, including the Kentucky Derby this Saturday.

Obviously bets can be made at Oaklawn, but they can also be made on oaklawnanywhere.com.

David Longinotti does a great job of managing the site. You do have to register and set up an account, and right now if you are a new signee you can get $150 bonus, but you must wager that amount in a certain period of time.

Oaklawn finishes its season on Mother’s Day this Sunday, and if you are looking for a great place to take mom for lunch, try The Bugler at the track.