Vanover eager to get to work at ORU 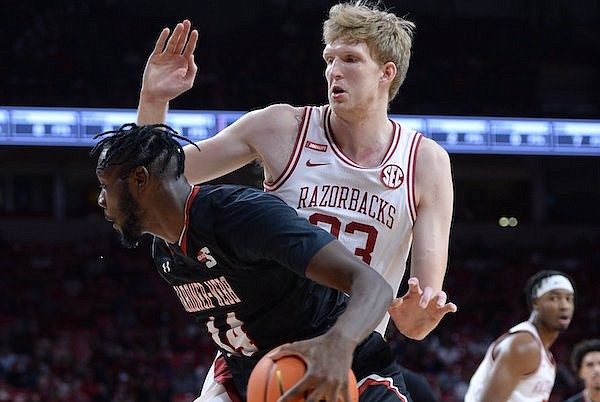 Gardner-Webb forward Kareem Reid (14) makes a move to the basket Saturday, Nov. 13, 2021, as Arkansas forward Connor Vanover (top) moves to block out during the first half of play in Bud Walton Arena.

McBride and Vanover, who as high school teammates helped Baptist Prep in Little Rock win back-to-back Class 4A state championships in 2016 and 2017, are being reunited at Oral Roberts University in Tulsa.

Vanover, a 7-3 forward who played at the University of Arkansas the previous two seasons after redshirting as a transfer from California, announced Monday that he is transferring to ORU.

McBride, a 6-0 guard, transferred from Vanderbilt to ORU last season and averaged 12.3 points for the Golden Eagles as a sophomore.

“Being able to play with Issac again is a big plus,” Vanover said in a phone interview with the Arkansas Democrat-Gazette. “We’re good friends, and he was active in recruiting me to ORU. I’m excited we’ll be teammates again.”

Vanover, who has two seasons of eligibility remaining, said ORU was among about 30 colleges to show interest after he entered the transfer portal on April 6.

“I think I’ll really work well in ORU’s system,” he said. “I’ll be able to do a lot of pick-and-rolls, pick-and-pops, especially. I think we can really do some damage there.”

“He wanted me real bad, so that was nice. The door just kind of opened for me to go to ORU. I’m looking forward to getting there and going to work.”

Vanover didn’t play in the final 19 games last season, so the decision to transfer wasn’t a surprise.

The highlight for Vanover last season was in the second game when he had 19 points, 7 rebounds, 3 blocked shots and 2 assists in 17 minutes in Arkansas’ 86-69 victory over Gardner-Webb.

“There were a lot of ups and downs,” Vanover said.

“Connor helped us win a lot of games,” Musselman said. “He always had a great attitude and was a pleasure to be around and coach every day. He’s loved by his coaches, loved by his teammates.”

Vanover said while he wished he had gotten to play more for the Razorbacks, he doesn’t regret his decision to transfer to Arkansas after averaging 7.5 points and 17.5 minutes as a freshman at California.

The Razorbacks were a combined 53-16 the last two seasons and made back-to-back NCAA Tournament Elite Eight appearances.

“I definitely am happy about coming back to Arkansas and getting to play in my home state,” Vanover said. “It meant a lot to be on teams that made the Elite Eight. I’ll cherish the time I had here.”

When Vanover wasn’t playing last season he remained enthusiastic on the bench, cheering on his teammates.

“I felt like no matter what was happening personally with myself and my playing time, I’m still part of the team and I’ve got to contribute some way,” Vanover said. “So I wanted to be uplifting to the other players and stay engaged the whole time.

“I wanted to always be there for my teammates and support them.”